“I will spend this election cycle and the years ahead supporting bold and creative initiatives to transform our broken system and address the disparity of opportunity that plagues our nation.” 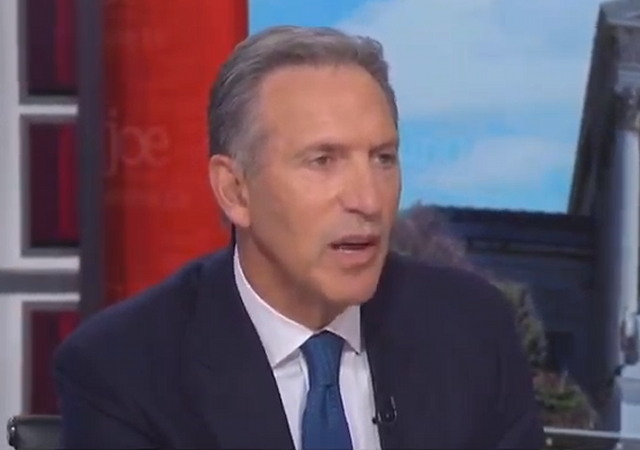 In case you guys forgot, former Starbucks CEO Howard Schultz had thoughts about running for president in 2020 as an independent.

Schultz announced this morning he has abandoned those plans because “an independent campaign for the White House is not how I can best serve our country at this time.”

In other words, he knew it would waste his time and money because he would go nowhere.

Schultz planned a center-left candidacy, which could have become a threat to the Democrats. Many cast him as a spoiler and warned him running could lead to President Donald Trump’s second term.

I doubt Schultz would have been a spoiler. The Democrats will probably spoil themselves since super far-left “progressives” dominate the 2020 field.

After all, instead of concentrating on issues that matter to the majority of Americans, the Democrats have chosen to cackle over climate change, extreme gun control measures, and seizing our private health insurance.

Schultz wanted to spend around $100 million on his campaign, but will use that money to fix our system:

My belief in the need to reform our two-party system has not wavered, but I have concluded that an independent campaign for the White House is not how I can best serve our country at this time.

I will spend this election cycle and the years ahead supporting bold and creative initiatives to transform our broken system and address the disparity of opportunity that plagues our nation.

The money that I was prepared to commit to a presidential campaign will instead be used to invest in people, organizations and ideas that promote honesty, civility and results in our politics, and that move the country beyond two-party gridlock. Common-sense policies and initiatives that can help address widening inequality at home, while strengthening America’s standing in the world, will be a priority. Among my early efforts will be to advocate for increased national service opportunities for young people.

Fix our system. Have these people not followed the chaos in the United Kingdom and Italy?

But anyway, we have one less candidate to worry about.

How is it this guy drug himself up form the bottom but doesn’t have the brains to understand how this works?

“…transform our broken system and address the disparity of opportunity that plagues our nation.”

Gee, that sure is clear.

Does “disparity of opportunity” mean he’s willing to give every barista a shot at CEO?

Sure – if you’re LBGTQ, black, Muslim, etc. – definitely does not apply to white males though.

It’s blather for his fans.

So, he’ll have to find another way to straighten us all out. Something along “common sense” lines. Common sense means in common with him.

You will never see Starbucks the same way again.

Did the Clintons talk to him?

I’m disappointed. I saw him on one of those CNN “town hall” things that I watched partly, and had a favorable first impression. Seems like a real class act to me. If he’d run, I’d have needed to look in detail at his ideas, but he did pass the character test.

Looks like another write-in vote for Vermin Supreme in ’20. Oh well. If the two parties can only offer clowns, I guess I’ll have to cast a second vote for one who at least makes me laugh.

Take a second look at the clown in office. He has a great sense of humor, and knows how to use accountants to straighten up the Executive branch.

And if you really want to see something educational, mosey on over to the DOJ and HUD websites.

Trump’s a rodeo clown. I attend a few rodeos a year and love rodeo clowns, but not as president. Past that, he’s a rotten administrator. I keep telling my D friends that they ought to kiss the ground in gratitude that Trump was elected, because if the country had elected a Republican who knew squat about government then they’d really have a lot to cry about.

I’m a former D (40 years worth) who doesn’t recognize what was once his political home. So I’m genuinely independent, and genuinely upset at the mutual assured destruction of both parties that’s been taking place for the entire decade.

I don’t know whether I’d have ever voted for Schultz, but he’s a successful, temperate man with character. I hate to see him go. Even if I wound up not liking his ideas enough to vote for him, he’d have made a positive contribution if he had run.

notamemberofanyorganizedpolicital in reply to RandomCrank. | September 6, 2019 at 4:27 pm

Anyone who’s a big wig, fat cat Democrat today is a total fraud.

Howard Schultz: Another Leftist of Eastern European Jewish ancestry doing his part to subvert America with his Marxist values.

Shultz, and so many others like him, are why I disavow my own Eastern European Jewish heritage. I went to a high school full of them.

If Schultz had stayed in as a Democrat he would now be in a position, with Biden’s physical and mental collapse, to inherit the “only moderate democrat candidate” label and take the nomination. There he could actually pose a Democratic Party challenge to Trump, who now faces a slate of nothing but lunatics.

Shows Shultz’ lack of vision and boldness. He’s a natural born surrender monkey. His employee carries out company policy and kicks out a non-customer who brags that he brought his own water and won’t be buying anything as he occupies seating and uses the bathroom. Shultz response? He orders massive company-wide surrender to blatant racial demagoguery.

“The only reason I was kicked out is because I am black!” You know, like the only reason Michael Brown was shot for his second attempt in thirty seconds to murder a police officer is because Brown was black. The officer would definitely have let Brown murder him if only Brown was white.

But Shultz buys it, and thinks that the fact that he is bowing down to blatant racist lying makes his prostration especially moral. Guy is a world class idiot.

notamemberofanyorganizedpolicital in reply to AlecRawls. | September 6, 2019 at 4:31 pm

I’m going to still call him a Democrat with a Capital D, because if he ran it would only be in an attempt to split the Republican voters.

RandomCrank in reply to notamemberofanyorganizedpolicital. | September 6, 2019 at 5:20 pm

We’ll never know, but I think Schultz would have doomed the Ds in WI, MI, NH, VA, NC, FL, and CO. I think the Rs are a lot more cohesive than the Ds are.

Drank too much starbuck’s “coffee”.

Howard Schultz may not be the sharpest knife in the drawer, but even he knows that if a Democrat is installed* in the White House after the 2020 election he would be a target for retribution by Democrats if he dared to run as an independent or third party candidate.

* – I say “installed” and not “elected”, because I predict the voting fraud in 2020 will easily eclipse the 2018 election, already the dirtiest and most dishonest election in American history. In the People’s Democratic Republic of California alone so-called ballot harvesting makes all state results in 2018 from Senator to assistant dog catcher problematic at best. 2020 will be vastly worse.

I don’t think he ever planned to run. He just wanted attention.

This guy is another snake oil salesman. Make coffee, a widely used product, call the people who pour it out “baristas” charge too much money, thus appealing to snobs. WAZA: Multimillionaire!

Sure, let’s make him President.