“It’s one thing to have a well-earned rep for goofy, harmless gaffes” 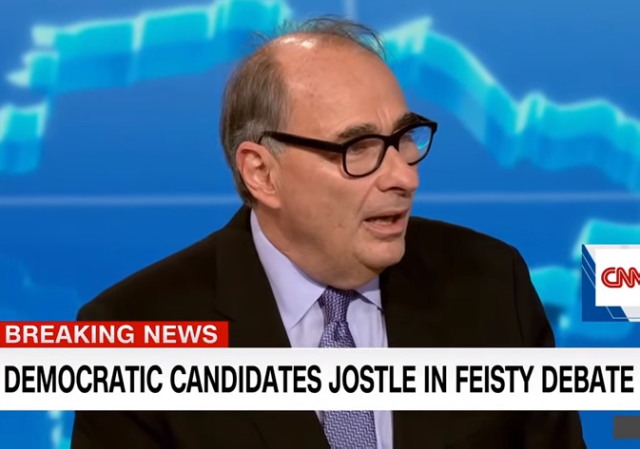 David Axelrod was a central figure in Obama’s 2008 presidential campaign and worked in the administration as well. For him to be criticizing Biden is, as the former Vice President might say, a big f-ing deal.

This serves as proof that the perception of Biden as a bumbling fool is not just a right wing talking point.

Imagine if Dick Cheney decided to run in 2012, and Karl Rove was offering criticism like this.

Former Obama White House adviser David Axelrod said in a tweet Thursday that Joe Biden was distorting his own record to a damaging degree.

Linking to a Slate article about Biden’s misleading remarks about when he began opposing the Iraq War, Axelrod wrote Biden was “in danger” of creating a harmful meme about his candidacy.

“It’s one thing to have a well-earned rep for goofy, harmless gaffes,” Axelrod tweeted. “It’s another if you serially distort your own record. @JoeBiden is in danger of creating a more damaging meme.”

It’s one thing to have a well-earned rep for goofy, harmless gaffes. It’s another if you serially distort your own record. @JoeBiden is in danger of creating a more damaging meme.https://t.co/ThCVCz4Fjb

This is not an isolated incident. Axelrod went after Biden following the last Democratic debate, saying he seemed confused and defensive.

David Axelrod says Biden seemed ‘confused’ at debate, seemed ‘part of the past’

During a CNN panel following the second Democratic debate, Axelrod began by expressing it was a “tougher night” for the “seasoned candidates” on the stage.

“They seemed like part of the past rather than the future,” Axelrod explained.

The ex-White House official then took aim at Biden as well as Sen. Bernie Sanders, I-VT.

“At times, the vice president seemed somewhat confused to me in handling some of the questions… He actually seemed a bit defensive,” Axelrod continued. “Bernie Sanders… he might have been a hologram. A lot of what we’ve heard tonight we’ve heard many, many times before.”

This puts Obama’s silence in a different perspective, doesn’t it?

“It’s one thing to have a well-earned rep for goofy, harmless gaffes”

Perhaps Axelrod should have said “charmless” …

If Biden didn’t know it before, he knows it know: the key Democratic operatives who run things want him out of the race, and the sooner, the better.

Speaking of distorting records, Axelrod, as Newspaper editor, sued to open sealed divorce records of Obama’s Senate opponent, Jack Ryan, causing him to drop out of the race.

Team Obama (Kamala Harris) and Team Hillary (Elizabeth Warren) are working Joe Biden out of the race. The death match against Bernie Sanders (not a Democrat) to follow will be epic.

the problem is Biden has enough in the proverbial tank to make it to the February caucus, still as the frontrunner

and let’s just be honest here: Biden is clearly lacking the capacity both physically and mentally to run for the presidency

you have to wonder why those closest to Biden didn’t say to him, “hey man, why not just retire and enjoy your last decade.”

Who must harris orally please to get the deal done?

The party is doing it’s best to eliminate dopey Joe.

Their problem, dopey Joe is the least nutty of all their candidates so the rank & file Dem is rejecting them.

I’ve put in another order for popcorn. Watching the Obama chosen one continue to go down in the polls is delicious (Harris).

I think I figured out what caused Biden’s blood-filled eye at the debate. Valerie Jarrett was in the audience, and had a plastic straw. At an opportune time, she loaded it with a wad of paper soaked in invisible ink, then launched it at Biden’s eye, scoring a direct hit. This was a warning to Biden.

Axelrod has a lot to lose: the more biden is revealed as a fool, the more it reflects on obama – and axerod: in other words, we now understand how biden stood by a traitor for 8 years, being too dense to know what was going on.

So what was axerod’s excuse for standing by a traitor for 8 years?