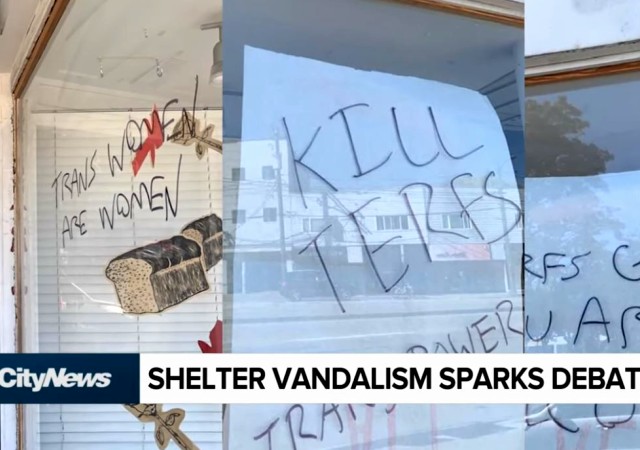 After the Supreme Court struck down state bans on gay marriage, liberal LGBTQ groups and allies in the Democratic party aggressively pushed for transgender rights under the guise of “equality for all.”

The progress they’ve made so far has proven predictably disastrous for women’s rights in America. Transgender women athletes born male are more frequently being allowed to compete in women’s sports, giving them an unfair advantage.

Sadly, the left’s transgender war on women has spread farther than the United States. In Canada, it’s arguably worse. Prime Minister Justin Trudeau has made catering to the whims of the transgender community, in particular, transgender women, a priority in his administration.

Canada’s troubling war on women is playing out quite dramatically in Vancouver. The city voted back in March to pull funding from the Vancouver Rape Relief and Women’s Shelter over their refusal to allow transgender women to stay at their facility.

The shelter, which has been operating since 1973, had to defend itself from militant transgender activists since at least 2006. That’s when Lee Lakeman, a founder of the women’s shelter, wrote about how males in their safe spaces could trigger female victims of sexual assault:

Men are strictly banned from spaces operated by Vancouver Rape Relief, and the organization has previously argued that their clients, all of whom are recovering from male violence, do not feel comfortable while in the presence of someone who used to live as a man. “Even deep voices, male insignia like baseball caps and boots can make women nervous,” wrote Lee Lakeman, a founder of the centre, in 2006.

More recently, in a January talk at Vancouver Public Library, Lakeman said “to me, this discussion of ‘inclusion’ is really the conduct of the backlash against feminism.”

The center has remained defiant in the aftermath of the city’s move, which has unfortunately led to an escalation in attacks against it: 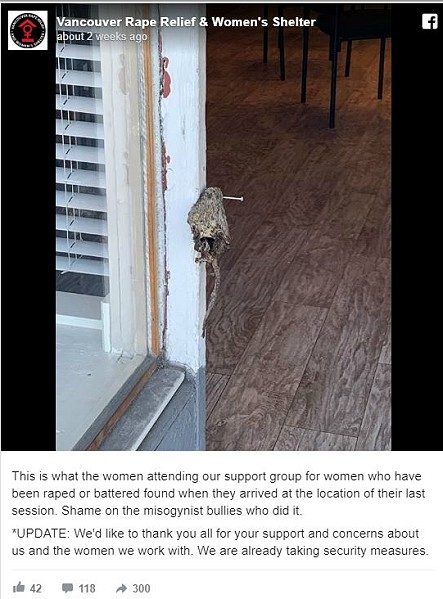 A follow up to the dead rat that was nailed to our door recently… this morning we found this writing scrawled across the windows of our storefront space that we use for support and training groups #Misogyny pic.twitter.com/vm6Gv8jWcj

TERF stands for Trans-Exclusionary Radical Feminist. TERF is another word for feminists on the left who oppose certain transgender rights on the basis that they effectively nullify women’s rights.

Watch a video report below on the two recent attacks against the women’s shelter:

It’s not known who committed the attacks and if they are connected. But the reaction of transgender activist Morgane Oger, who led the fight earlier this year to have the city pull the center’s funding, was quite revealing. It was also a stark contrast to the statement she gave in the video news report about how hatred wasn’t the answer:

I empathize VRR feel threatened by the predictable response to their conduct. As I have previously offered, I am ready to help VRR get out of their mess if they wish to.

It sounds a lot like the “skirt was too short” defense. Unfortunately, telling a rape crisis center, they asked for it is about par for the course for prominent radical transgender female activists like Oger. Her response shined a bright light on the visceral misogyny inside the underbelly of some female transgender community circles rarely discussed outside of online forums.

Here are just a few examples from transgender female activists telling women to either conform or shut up:

Hey cis ppl: vancouver rape relief and feminist current are anti trans and proud of it. When you volunteer, give, display posters, share tweets, you are supporting transphobia. Not debatable. Not agreeing to disagree. Not a difference of opinion. It’s just hate. So just stop it.

Not all opinions are equal.

Not all opinions are deserving of our time and consideration.

Not all opinions should be given space in the public square.

If you push a “belief” that is directly harmful to others, you have moved past “opinion” and into a threat to public safety.

Facts don’t care about your feelings.

If you feel it’s unfair for trans women to compete, too bad. Suck it up, buttercup. The world has moved on. There is no ‘debate’ to be had.

Transgender activist Riley Dennis argued in a YouTube video that lesbians who refused to date transgender women were being discriminatory and transphobic:

Do not forget the case of the Canadian female transgender activist waging war against any women’s salon that refuses to wax “her” genital area:

Jessica Yaniv was interviewed by Irish broadcaster Niall Boylan on the "wax my balls" human rights case. Yaniv told Boylan that women have no right to reject a trans person's demands to touch their scrotum. Yaniv hung up mid-interview. pic.twitter.com/5dbmz3vfEh

Even prominent women once hailed as pioneers by progressives for their work on women’s and gay rights have been branded transphobic. They’ve told them to shut up for speaking out against allowing transgender women in women’s sports. Female transgender activists have targeted them in name and shame campaigns.

The irony here is that the vast majority of these outspoken women believe in some form of transgender rights. That is, provided they don’t invalidate women’s rights and accomplishments.

But for the out-front transgender women activists mentioned in this post, it’s all or nothing. Women must be with them, or they are the enemy. That enemy deserves to be targeted, shamed, intimidated, and ostracized.

It’s no wonder a rising number of left-wing feminists and conservative women here at home and in Canada have stood against the bullying, harassment, and the use of government force and the courts to make women conform.

And soon to be a legal requirement.

Exactly the point, as it has been for the last 100 years of communist totalitarianism. It’s not enough to coexist with insanity, one must be made to enthusiastically approve. Otherwise the face cage containing the rat will be applied.

A sociopath will destroy you if he/she fails to control you. If the target of the sociopath fails to submit, the destruction is the fault of the victim who made the “wrong” choice. Totalitarianism (Socialism/Communism) is so attractive to a sociopath because one has the authority to control others. This is a demonstration of: We will control you with or without your “voluntary submission.”

Transgendered rights? Women’s rights? Rights belong to individuals. Individuals are members of many groups simultaneously. Individual rights = freedom. Group rights of any kind = power over people which attracts sociopaths like honey attracts a bear. Talk group rights of any kind, watch for the sociopaths appear on one side – the controlling side. It is inevitable that two groups-rights group will clash over common “victims.”

It’s not unfair advantage but that the women don’t think the intruders are women.

A real woman who’s really exceptional would have an unfair advantage over other women but that would be celebrated.

It’s got to be a woman, though.

No surprises here. All communist dictatorships require terror in order to survive, and that includes terrorizing communists as well as non-communists. EVERYONE is a potential counter-revolutionary enemy of the Communist State – including its loudest and most enthusiastic supporters.

And feminist leaders ultimately care about abortion only and the “right” to butcher children, so they don’t really give a flip about rape (see feminist do-or-die support for William Jefferson Clinton).

The intrinsic hypocrisy of Leftism’s glaringly contradictory ideological postures, writ large. Strut and preen and bloviate about “women’s rights,” ad nauseam, all while simultaneously embracing/enabling/rationalizing/whitewashing the oppressive and violent misogyny that is inherent to the ideology of “Submission,” and, while empowering mentally ill, pathologically narcissistic men passing themselves off as women — all to the detriment of actual women.

Let’s call this behavior and agenda what they plainly are, without equivocation — “trans” totitarianism, the latest sub-manifestation of Leftism’s intrinsic totalitarianism-at-large.

I meant to type “totalitarianism,” above. Just in case there was any doubt, LOL. ?

So how many centuries are so called “trans” rights setting women back…1…2…5…??? Ultimately what it translates into is what a very small number of men…because they ARE men…. want takes precedence over the rights, freedoms,safety,comfort etc of ALL women.

Stacey, you have already surrendered to the ‘transgendered’ by referring to males who believe that they are female as “trangender women” and using the feminine pronouns to refer to them. Don’t do that!

‘Trangender women’ are male, have been and always will be male. We must not surrender to their corruption of the language.

“But, some women have penises.”

Unabashedly stated as fact, by the “trans” man in the video above, who, despite undergoing surgery, hormone treatments and God-knows what other non-medically necessary procedures, still sounds like a man. Because, he is one.

It’s easy to laugh at these people and their agenda, but, make no mistake – – these are totalitarians.

Transvestitism is an unfortunate birth defect. Transgenderism is an absurd fantasy

Further proof that the “justice” in social justice is pronounced Just-Us.

I can’t even believe we’re having this discussion. Women are women and men are men. Yes, there are some mutations, but they’re not statistically significant. There are TWO sexes.

Under relentless attack by people who in a real civil society would be shunned and scorned.

there are three options

Oger, a slight misspelling* but apparently a totally appropriate name.

The TERFs are simply on the receiving end of the same tactics they’ve employed against shelters and services for abused men for decades.

No sympathy. Let them fight.

a trans-woman is…a man with delusions.

you can reasonably expect people not to abuse a man with delusions, but it’s Orwellian to expect people to play along and deny the delusion.

That Transwoman has a bigger Adam’s apple than me.