Ranked 390th when he competed against other men 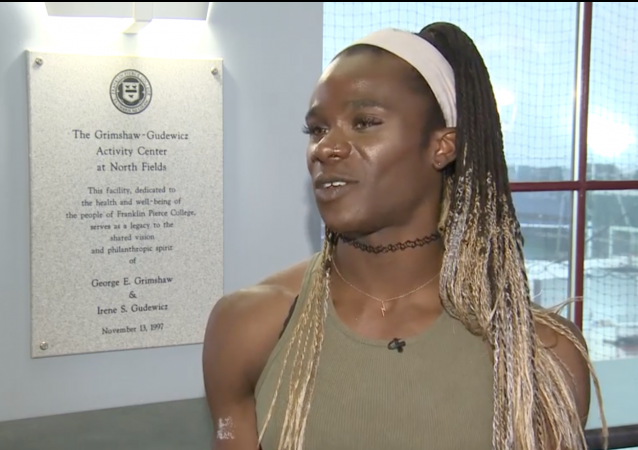 Transgender woman CeCe Telfer, who was born and raised as Craig Telfer and competed on the Franklin Pierce University men’s track and field team during her first three years of college, won the women’s 400-meter hurdles national title at the 2019 NCAA Division II Outdoor Track & Field Championships. Telfer dominated the competition, winning in 57.53 as second place was way back in 59.21.

Prior to joining the women’s team this season, Telfer was a mediocre DII athlete who never came close to making it to nationals in the men’s category. In 2016 and 2017, Telfer ranked 200th and 390th, respectively, among DII men in the 400 hurdles (Telfer didn’t run outdoor track in 2018 as either a man or woman). Now she’s the national champion in the event simply because she switched her gender (Telfer’s coach told us that even though she competed on the men’s team her first three years, her gender fluidity was present from her freshman year).

The fact that Telfer can change her gender and immediately become a national champion is proof positive as to why women’s sports needs protection. Telfer ran slightly faster in the 400 hurdles competing as a man (57.34) than as a woman (57.53), even though the men’s hurdles are six inches taller than the women’s hurdles. Yet when Telfer ran 57.34 as a man, she didn’t even score at her conference meet — she was just 10th at the Northeast-10 Outdoor Track and Field Championships in 2016. Now she’s the national champion.

“It felt pretty powerful and empowering and just free,” Telfer said of her recent victory in the Division II women’s 400-meter hurdles at the NCAA Women’s Track and Field Championships.

Telfer said her first-place win is the culmination of a long journey on the track and in life.

“The gender dysphoria and the body dysphoria was affecting me more,” she said.

If this sounds familiar, that’s because it’s not the first time this has happened. See our previous coverage:

So they let a man compete against women and he beat them…and “feminists” applaud the subjugating of their sex by males…no wonder they love Muslims…they crave the oppression.

People really only want to be free of responsibility. Subjugation won’t bother most of them.
Having someone else take all the risk is acceptable for them to give up freedom so they can loudly blame SOMEONE ELSE.
And feel smug while doing so.

Alternative headline: “Leftists Cheer as a Blinkered Crossdresser Wins a Participation Trophy in the Escalatinging War against Women.”

How is that grrl empowerment going, beyotches?

When is Hilary going to show her support of her?

In High School, I couldn’t run fast enough to stay with my own shadow, but beat Wilma Rudolph’s Olympic gold time. If only I had known. sarc/off

The only way this transgender bullshit insanity is going to end is when the average person is directly affected by it.

Right now you have a whole bunch of preachy SJW morons screaming their lungs out about ‘tolerance’ and ‘transphobia’ while never actually having to interact with them in their daily lives.

Now normal women are being directly affected by this crap.

Either this transgender lunacy stops, or women’s sports cease to exist. Pick one.

You’re awfully optimistic. I don’t see it ever ending.

I agree. Only when normal people begin to suffer consequences from this insanity will normal people care enough to fight back. Similar outrage against politicians, in my opinion, is why we have President Trump.

It will end when the preachy SJW screechers get their faces smashed in and their teeth punched down their throats.

If you want it to stop, the answer is simple:

Get Muslim female athletes in hijabs to protest and boycott.

Hoe long before the 15 second best male basketball players at Duke are the women’s team?

The TarHeel women will still beat them, or, at least steal their sign.

As long as enough women support biological males competing in women’s sports to keep it happening, and women keep entering into the competitions, I couldn’t care less what it does to women’s sports.

The girls and families need to walk out and not compete with them. It must come to a head

When women’s athletic scholarships go to these men, will people wake up?

Craig needs to present evidence of a Pap test.

Telfer is still a mediocre athelete who never came close to making it to nationals in the men’s category.

This leftist insanity keeps getting worse. Men are competing against women and the women are losing. Transgenders are not women. They will never be women. Hormones don’t make a woman and you can’t make a woman with surgery.

But Caitlyn Jenner won Olympic gold competing against men, so it evens out.

It’s difficult for me to see how pandering to a psychologically defective man promotes anything positive.

The real female athletes need to refuse to compete when a transgender enters an event.

How has Title IX not knocked this transgender nonsense out of the university picture? It’s meddled in everything else.

I applaud the left for destroying title IX.

No more women’s sports, just shameless men who couldn’t get scholarships on the men’s team.

I’m being sarcastic. My daughter will probably end up going to college on an athletic scholarship, so this is real to me. However having put own butt through college on a track scholarship, my opinion of college sports is pretty low, so am not that vested.

It is interesting that we never see transgender males [physical females identifying as males] entering physical sporting contests against biological men, let alone winning any of them.

Looking at the picture of this person (and operating under the classic boy-girl model) I am wondering what type of person would be interested in dating him/her.

A transgender woman is a man, so why not just say so!

I think Gillette has found its next spokespervert. Was that too harsh?

Holy Crap, that was funny !
(but I have a weird sense of humor)

By the way, Gillette has a new commercial when a dad teaches his trans “son” how to shave…

On the other hand women’s sports have gotten an unnatural boost for decades from Title IX forcing a type of equality in an area where men had more interest than women, and where the fans are more interested in watching men than women.

We even have separate women’s chess, which isn’t even a sport at all, for the mere reason that generally women can’t or don’t keep up with men’s performance in that game. (It’s not just world champions, or national champions, we don’t even have female state champions.)

The old way wasn’t great either. In this era of intersectionality and equity, it can be asked why there’s no similar provision to protect basketball for short people. Logical questions have been asked, and the status-quo has no answer.