The UK government’s negligence could create an uncertain future for the preservation of these historical artifacts. 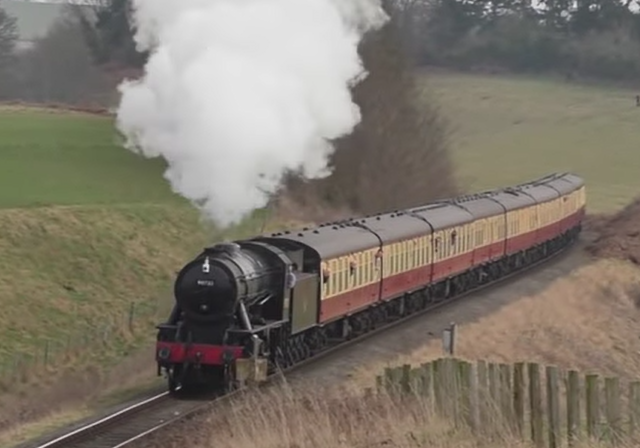 More Sharing Options
Recently proposed restrictions against fossil fuels in the United Kingdom are threatening one of the country’s most historical tourism sectors.
As the country movies towards carbon-neutral power sources in the country’s fight against climate change, one unintentional victim of the increased restrictions could coal-fired steam locomotives used as part of historical heritage railways.
As reported by The Telegraph,

As the country moves towards a carbon-neutral future, officials plan to shut down every coal plant in the UK by 2025.

Members of the £400m steam train industry have said they face an “uncertain future” and have asked for government help, as they fear the coal price rises that will be caused by the plant shutdown will put them out of business.

Conservative councillor Thomas Smith, who drives a steam train in Norfolk said: “Every railway enthusiast needs to write to their MP, and create a big stink.

As the government shuts down the country’s few remaining coal mines, the price of coal is threatening to skyrocket over the next several years which places the industry of operating classic steam locomotives at risk.
While the government doesn’t seem to be intentionally targeting the heritage railways on any ecological grounds, the unintentional effect of the crackdown on fossil fuels could have clear unintended consequences for these businesses.

Ian Crowder, from Gloucestershire Warwickshire Steam Railway, told the BBC: “It’s all very well the government gives us reassurances but those reassurances needs to be in legislation.”

He said: “It’s the law of unintended consequences: no-one including government wants railways to be affected but if other coal use disappears that would be the effect. UK currently uses 12m tonnes coal pa – railways use just 26,000 tonnes pa”.

A Department for Business, Energy and Industrial Strategy spokesman said: “Our policy of phasing out coal in our power system by 2025 will not restrict its use for heritage railways.

The UK government’s negligence could create an uncertain future for the preservation of these historical artifacts. Here in the United States, historical railroads have similarly remained mercifully unscathed by the ambitions of the progressive left and this year’s push for the Green New Deal.
If laws like those of the UK were to come into effect via the GND and severely limit fossil fuels the effect could be similar and threaten American excursions too. These laws serve as a good reminder that the benevolence of the government comes with unintended side effects.
More Sharing Options

The fact is, politicians and fabulists make terrible decisions based on wishful thinking.

It goes back to the same joke:

Q: What did socialists use for light before candles?
A: Electricity.

Here in the United States, historical railroads have similarly remained mercifully unscathed by the ambitions of the progressive left and this year’s push for the Green New Deal.

. . . These laws serve as a good reminder that the benevolence of the government comes with unintended side effects.

The Green New Deal is NOT about benevolence. It is about government dominance of all aspects of life and society. Very Mussolinian, in fact. Or worse, very Progressive. Unlike them, Mussolini at least had the great virtue of honest patriotism.

Don’t mess with the locomotives! Where’s my inner Sheldon??

Here in the United States, historical railroads have similarly remained mercifully unscathed by the ambitions of the progressive left and this year’s push for the Green New Deal.
****************

who told you that?
eastern roads and their locomotives used anthracite and thats getting hard to comeby for heritage fleets.
western roads used more of a bituminous but western fleets having to convert to oil due to fire danger from bad forestry practices.
so yeah….they have not been unscathed

Presumably its boilers could be fired with propane or some other fuel if coal becomes too expensive, or if the regulations regarding its use become too onerous. Although it would lose some authenticity in the process. Even though it’s just one ship, it has been (and remains) the target of some zealous environmentalists who think it should not be operating.