Elizabeth Warren is manipulating Native Americans again for her own benefit. 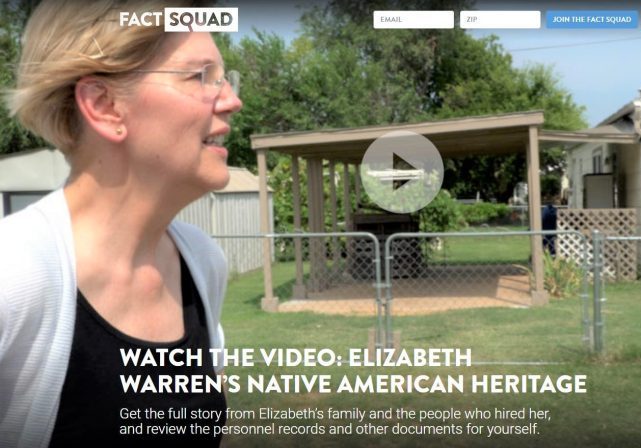 Instead, beginning in the mid-1980s, Warren asserted her Native American claim in the information provided to a law professor directory widely used for hiring purposes. That claim to be Native American landed Warren on a short list of “Minority Law Teachers.” Warren’s supposed Native American status was not disclosed in the directory, only that she was a minority.

It was a particularly devious maneuver, enabling Warren to seek the benefit of being a minority at a time when there was an intense push to diversify faculty, without having to justify her claim to be Native American. Warren would maintain that stealth status in the law directory when she was hired as a Visiting Professor at Harvard Law School in the early 1990s, and it was noticed. The Harvard Women’s Law Journal listed Warren on its short list of “Women of Color in Legal Academia.”

Warren used Native Americans when she needed them professionally, then dropped them.

When Warren’s claim to be Native American was discovered in April 2012, during the Senate campaign, Warren defended her claims with dubious family lore stories. That defense would continue throughout the 2012 Senate campaign, and for six more years whenever Warren was confronted on the issue. Yet as a Senator, Warren did little to nothing to help Native Americans.

Warren even went so far as to roll out a DNA test showing, at best, a tiny fraction of potential Native American DNA. That DNA rollout was met with fury from Native American leaders, who asserted that Warren was doing substantial damage to Native Americans by focusing on DNA. Even then, Warren initially defended her claims and her DNA test, until the problems came close to killing her nascent presidential campaign.

Senator Elizabeth Warren of Massachusetts on Friday laid out a collection of policy proposals intended to help Native Americans, pledging to protect tribal lands and to bolster funding for programs that serve Native people.

Among the proposals, Ms. Warren said that if elected president, she would revoke the permits for the Keystone XL and Dakota Access pipelines, two projects that have been opposed by many Native Americans. No energy project significantly affecting tribal lands should go ahead, she said, “without the free, prior and informed consent of the tribal nation concerned.”

She also called for expanding the ability of tribes to prosecute non-Native Americans for crimes committed on tribal land, and she proposed creating a nationwide alert system for missing indigenous women.

Note the timing — right before a Native American presidential forum.

Timing is everything, and Warren waited almost 35 years since first claiming to be Native American, and seven years after becoming Senator, to propose a plan to help Native Americans. She waited until the moment it would help her presidential campaign the most.

The timing has caught the attention of independent Native Americans such as Twila Barnes, the Cherokee genealogist who did as much as anyone in documenting Warren’s lack of Native American ancestors. Barnes tweeted:

When she no longer needs us, she will forget we exist. She had 6 years to work on these things while she was a Senator. They only became important when she decided to run for POTUS and only then because she has the fake claim/DNA problem.

As we move to closer to 2020, every story about Warren and Indians will be positive, declaring her a friend of Indians and the controversy over. All who identify with the political left who chastised her over this will fall in line. It’s all driven solely by partisan politics

Once again, Warren is manipulating Native Americans for her own benefit.

I have this visceral reaction of wanting to puke after I read every Warren article.

Not puke ON her?

I’ve got it.
Elizabeth Warren’s great great grandparent lived in the wild west and was kidnaped by Indians in a raid on the evil white people. Once there, the child was raised to be an Indian, therefore no DNA. That’s it.
Actually I just made it up. Just like Elizabeth Warren did.

How dare you repeat the white supremacist myth that the peaceful Earth-Mother-worshiping Turtle Islanders were barbarians who kidnapped colonialist children?

notamemberofanyorganizedpolicital in reply to gonzotx. | August 18, 2019 at 10:29 pm

One of these days, especially if she climbs into the lead, one of her opponents will make a big issue about how she defrauded the affirmative action system and crawled over the backs of real minorities and deserving minorities to get ahead and to get where she’s now at. Her numbers will crater.

Well it’ll have to be one of her opponents, because msm will NOT raise that issue in the next debate

And should the unbelievable happen and she gains the nomination, the MSM will excoriate the President for making an issue of her lack of the claimed Native American descent.

This is true of most political promises. That is why DJT was elected.

Donald J. Trump has a Native American plan? Who knew?

She Who Speaks out of All Four Sides of Cheeks.”

If American Indians support this POS in any manner, they deserve all the misery they’re going to get and have ever gotten.

Too late now, the check has already cleared.

Maybe so. But if they do sell out and sign on, they’re credibility as a minority deserving of special privileges is shot.

Beware white woman with Hitleresque arm motions when she speaks, who pretends to be Stands With a Fist (from Dances with Wolves). The only fist you’ll see is her knuckle sandwich to the American people that she includes with every “plan” – kind of like a prize in every box of cracker jacks. Except her prizes make everything worse. Remember, her what her mentor Stalin called his annual “Plan” took freedoms and even food away from the people. Elizabeth Warren should be making retirement plans for herself instead.

Hitler had his arm motions (and a lot of other effective motions) but it’s about what he said as he motioned. What this POS is saying – with or without arm motions or beer drinking – is what is infuriating.

notamemberofanyorganizedpolicital in reply to Sally MJ. | August 19, 2019 at 2:44 pm

With Amerindiands comprising 1% of the electorate, this is not a smart move. Of course, she is not pandering to Amerindian voters as much as she is to anti-White voters, which make a sizeable fraction of the Democrat primary voter base. But, by doing this she is guaranteeing her affirmative action fraud will resurface in the news.

Well written post.
I don’t understand the tendency on this site,however, and many others, to quote a tweet and then reproduce the actual tweet immediately below the quote.
It disrupts the flow of the post, and serves no useful purpose.

The site is run by a law professor: he’ll never state anything without being able to prove it. Hence, the actual tweet below the quote.

Now, read the likes of the ny times and their ‘reliable sources say’ quotes, and you’ll notice their fraud more easily.

That makes me a “Native American,” although not an “American Indian.”

Words mean things. Phrases do, too.

Running Back To Saskatoon

Well if we are going to slice hairs on the meanings of phrases the term Indigenous American might be what you are going for. Indian itself was coined from the spanish phrase ‘children of god’ which was shortened to endios/indian.

A person who is a native american would rarely refer to themselves as that. They will use the name of their tribe. I am Creek. I am Seminole. You get the picture. When others refer to them the most accepted term by all those members of the First People is ‘native american.’

Indian itself was coined from the spanish phrase ‘children of god’ which was shortened to endios/indian.

Bullsh*t. “Indian” comes directly from the fact that Columbus was convinced the land he’d discovered was some remote region of India.

When others refer to them the most accepted term by all those members of the First People is ‘native american.’

No, every survey ever done shows that it’s “Indian”, or to avoid confusion “American Indian”.

The Seminole descend from displaced natives of other tribes, escaped slaves (both native and black), and whites who adopted native ways, all of whom took refuge in the Florida Everglades. So when attempting to trace Seminole ancestry, DNA is of dubious value at best.

“members of the First People”

Archeology points to today’s Amerindians, whose ancestors entered the Americas via the Bering Land Bridge about 12,000 years ago, were not the first people to occupy the Western Hemisphere. Sites provide evidence that Europeans (Solutrians) first occupied North America from the east, that Australians first occupied South America from the south, and ancient Japanese inhabited coastal areas in the west.

“Indigenous” implies “originating or occurring naturally in a particular place.”

“Native” implies “associated with the place or circumstances of a person’s birth.”

She’s pandering to the left, not indians. It’s the helpless-children-being-helped vote.

So “bolster funding for programs” and rescind a pipeline that will be good for all and which the tribes did consent to. Typical lefty: more welfare, more meaningless protest!

How about you find a way to make the NA independent of government, like giving individuals title to their land, just like everybody else?

US government and tribal relations are still largely defined by the Indian treaties, many dating back to the 19th century. These give most native tribes status as pseudo-sovereign nations, which complicates everything from criminal jurisdiction to property titles. (And exempts tribe-owned businesses from most state taxes.)

Changing that would require the tribes to renounce this pseudo-sovereignty and thereby render the treaties moot. There’s several reasons they wouldn’t want to do this, most with dollar signs attached.

So, is it fair to observe that, many moons after being exposed as a greasy, mendacious, self-serving, race-exploiting ethnic poseur and general phony, forked-tongue Fauxcahontas now seeks to gloss over this unsavory and disqualifying episode by offering Native Americans heap big piles of wampum?

Lizzy Warren took an axe, gave the Indians 20 whacks;
When she saw what she had done she gave America 21.