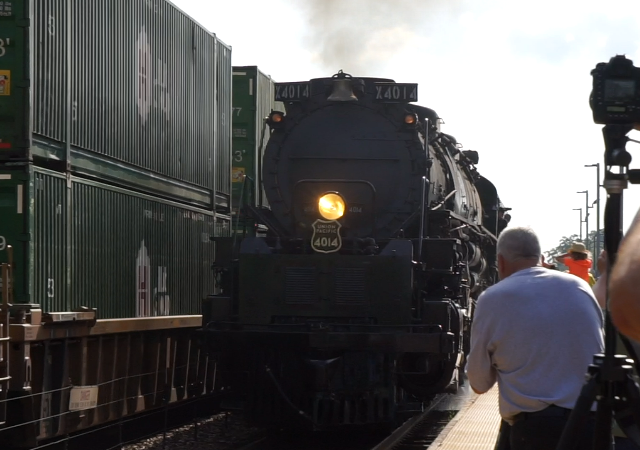 Over the weekend of July 27th, the city of West Chicago, Illinois played host to the largest steam locomotive in North America. The locomotive, nicknamed “Big Boy,” was built in 1941 for the Union Pacific Railroad. It was retired from active service in 1959 with the discontinuation of steam service on American railroads and turned into a display piece in Pomona, California.

In 2012, the Union Pacific railroad announced the plan to acquire one of the eight surviving locomotives of its type on display and to restore it as part of the Union Pacific Heritage Fleet, which operates the only activate steam locomotive repair shop owned by a major railroad in the United States. After being removed from its display and an arduous five-year restoration process, the locomotive was officially placed in service as an excursion train in May of this year.

At the beginning of July, the locomotive began the leg of a much larger month-long journey that is currently underway, taking the behemoth of a locomotive across the Midwest states of Nebraska, Minnesota, Iowa, Wisconsin and Illinois before begins its return journey to Cheyenne, Wyoming. 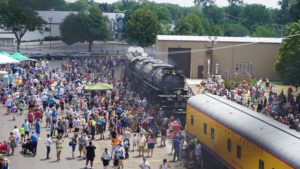 The locomotive arrived in West Chicago on Friday, July 26th where it began the tedious process of switching and preparing it for display for massive crowds of observers to come to see the locomotive in person.

To the surprise of some, the area around the locomotive was packed. Thousands of people lined the sidewalks and streets surrounding the display with their families in tow in an effort to see the steam train.

As evidenced by the hundreds of amateur records of the train’s tour on YouTube and social media, the crowds that this locomotive was drawing were enormous. Every place the train stopped was accompanied by hundreds of spectators. Most of them are too young to have ever seen a steam locomotive before. In West Chicago, the train station where it was on display congested foot and vehicle traffic for half a mile around the location as people desperately searched for parking and walking space.

It was a surprisingly edifying experience to see in person. Here was a train, of all things, drawing massive crowds, photographers and people of all shapes and sizes to see something they’ve never seen before. It struck me just how weirdly uniting and enthralling the experience was. 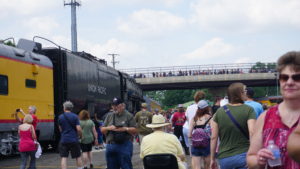 At 78 years old, the brittle metal and complicated mechanisms that operate such a locomotive make rebuilding it all but impossible for anyone not willing to pour millions of dollars into such a project.

Here was a massive technological accomplishment, resurrected for the first time in decades and adorned in American flags bringing out entire families. In an age when the Betsy Ross flag gets called racist and people take it seriously, you’d think something so adorned in casual patriotism would be considered somewhat controversial.

At the very least you’d think some climate change group would protest using a locomotive so large that requires three separate oil tenders to function. It would’ve been a slightly amusing (if grotesque) sight to see a half dozen activists glue themselves to a parked steam locomotive as we saw in last week’s climate protest in Washington DC.

There’s something quite joyful about being able to enjoy such a pure experience in the current year. There’s no controversy to be found. Instead, thousands of people quietly came out to celebrate hard work, achievement, ingenuity and American technological might just so that they can say they saw the Big Boy.

It’s a great reminder that, at the end of the day, everyday people are decent and that they can come together to celebrate the good things in life.

The rebuild on this unit was interesting to watch.

Not much inspires awe and wonder anymore. That the Big Boy holds up after nearly 80 years, built with human hands and the limited technologies available then? It’s a marvel. God bless the heartland folks!

Meanwhile, on the other side of the tracks. . .

Real America…. standing next to (no guard rails) the tracks, the power and size of these locomotives is felt as much as heard and seen!

Stand next to a steam locomotive and feel the heat emanating from its firebox, listen to the creak and pop of expanding and contracting metal, the whine of the generator, the rhythm of the air compressors. Smell the leaking steam and lubricants. The damn thing is alive!

Brings tears to your eyes.

freight railfan here, been following the sage of 4014 (and prior to that N&W 611) restorations.
got thousands $$ of videos here LOL

This locomotive was mainly used on the run between Cheyenne and Ogden Utah. The steepest pull on the enitre run. Out across the Contenital Divide.

I have wanted President Trump to take a train ride through America for his re election, this would be super great!

for anyone interested this is a good ref for big boy
https://kalmbachhobbystore.com/product/special-issue/vt-tr6140401
can get print and print/digital versions

I imagine it would be a security nightmare, but I would love to see it

I remember President Bush 41’s funeral train, it was quite something

Trains are powerful messengers to the American psychic

I rode the Silverton to Durango train, now that’s a train ride right up the mountain top

I was just in Omaha last week. Unfortunately, I missed out on Big Boy 4014 because it was in Omaha the week prior.

Don’t let this happen to you!

No Eastern USA places on the 2019 schedule. Have you heard of any such possibility. It’d be great watching it come through Horseshoe Curve (though I don’t know if that’s even possible given turning radius requirements for 4014).

iirc ed dickens said no plans to take it off UP rails. wye’s are the big issue with centipede tender even with rails (like old C&O or the virginian stuff that ran Allegheny) that used to run large mallet type.

UP tracks pretty much end at the Mississippi (with exceptions), so you’ll have to Horace Greeley, young man, if you want to see the Big Boy.

The curve radius and rail size of the eastern lines are mostly inadequate for the giant articulated locos, like Big Boy, with their massive centipede tenders.

I remember steam engines! Just the other day, on the 50s channel on Sirius XM, I heard the children’s song: “Down at the station, early in the morning, see the little pufferbellies all in a row.” Kids now would have no idea what this was about.

The eco leftists didn’t protest because they thought the locomotive coming was michelle obama vaping.

The city of Portland owns three with the largest at 114′ and 440 tons. They pull a Christmas train and you can hear the whistle about 5 miles away.

I remember seeing a tribute to Gandy Dancers when I was a youngster. That would go well with Big Boy.

Good morning America how are you?
Don’t you know me I’m your native son.
I’m the train they call the City of New Orleans.

Or so Steve Goodman wrote. Trains helped Americans span the continent–and still haul a good deal of our freight.

So why not be fascinated by Big Boy? It’s a train. It’s big–the biggest we ever did. It’s an American artifact, and by gum, we’ll all go to see it when we can.

It is the same reason that one goes and stands on the deck of the Missouri.

I’m only 62 but I have a lot of “old codger” in me. I have very little interest in stuff to do with balls, but show me torque and recoil, and I’m there.

Despite the obvious locomotive size differences and the 1,200 mile spread, more or less, between Chattanooga and Sherman Hill, I’ll take any excuse to play it. Stoke her, Glenn! Chattanooga Choo-Choo

Very cool. It helps that we still have tracks for this thing to romp about on. Of course despite the name Big Boy, the 4-8-8-4s were dwarfed by the gigantic (and extinct) 2-8-8-8-2 Triplexes, but Big Boy and her sisters worked well, which the Triplexes did not.

To the surprise of some, the area around the locomotive was packed.

Shouldn’t be a surprise. Everybody likes steam. It was what freed civilization from reliance on animal power, and enough of us remember that. The triple-expansion marine engine is very cool too, but steam locomotives have a special appeal, I think partly because so much of the mechanism is on the outside, rather than hidden behind sheet metal like most of our other machines.

The diesel locomotive is there to provide electricity to the passenger cars, and probably serves as a back-up.

Emperor Of The North https://www.youtube.com/watch?v=5jn-ZS7g8xs&feature=youtu.be&t=84

Mom’s uncle had a small version of a railroad (don’t know the gauge)in Mio, Michigan. Only visited once when we were kids. So don’t really remember a lot about it. From a site I found a while ago.
—————————————
The truth was that Carrington had made a great deal of money from his Michigan forests. It was such a large operation that he had a miniature railroad built to bring the logs out of the forest. Helen told me that friends and friends of friends came on weekends to enjoy a ride on the train. (Only during the week was it used to haul logs). The engineer, dressed like an engineer on big railroads, would blow the whistle as they sped along, much to the delight of the passengers. It was a big hit, but eventually it became such a nuisance that to cut down on the number of visitors, Carrington reluctantly had to charge for the rides; that, too, made money!”

The steam stern wheeler at Disney World’s Magic Kingdom is a great joy.

during the rebuild, they switched the fuel from coal to fuel oil…

it’s still an awesome beast though.

there’s an excursion scheduled here in SoCal in early fall.

i’d poast a link, but i want get on board, so “neener neener!”

I have loved steam engines since my first train trip which was pulled by a steam locomotive (IIRC ’53). I’ve made sure the grandkids have had the opportunity to ride the Texas State Railroad for a steam powered experience.

The mesmerizing motion of the valve gear, the almost life like break thing of the exhaust and the site. Call of the whistle are what beckon us to see the steam locomotives as near “life like.” At age 58, it’s still a thrill to see these giants run. I first saw steam, riding behind a geared logging locomotive in Maggie Valley, NC at age 3. While that tourist railroad ended operations within a year or two after my early child hood visit, I was permanently afflicted with “the disease.” I remember hearing a steam locomotive whistle on Mother’s Day in 1974 and asking Mama “Is that what I think it is?” She got Daddy and he drove us over to Charlotte Junction to see Southern Railroad 4501, a 2-8-2 type freight locomotive pulling an excursion train into Charlotte (from Columbia, SC), with one of the Southern’s Tuxedo Painted freight locomotives idling behind, just in case of a breakdown. Mama cried, seeing it.

Those were the beginnings of a life long passion for me. I still go to see, ride behind them, photograph them and even make audio recordings of them. And I was fortunate enough to find a beautiful girl who would also willingly indulge my habit.

Hoping the would be protestors would tie themselves to the tracks. Ideally, no cowboys would come save them on horseback.

Watching a steam locomotive at speed is mesmerizing…