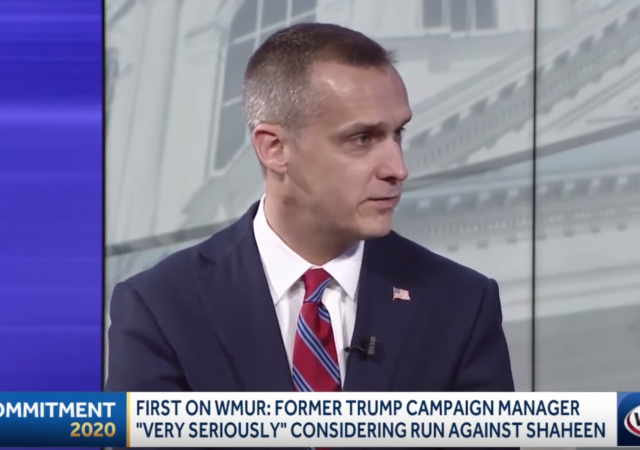 Rumors have started to float around that Corey Lewandowski, a former campaign manager to then-presidential candidate Donald Trump, plans to run for the Senate in New Hampshire.

Those rumors gained fuel after news came out that Lewandowski will join Trump in New Hampshire on Thursday.

“I will be with the president tomorrow on his visit to New Hampshire and I’m excited for him to come back and talk about his message of economic prosperity and national security,” Lewandowski told The Hill.

Asked whether he planned to announce his candidacy during Trump’s visit to New Hampshire, Lewandowski demurred, noting that the state’s 2020 Senate primary is still more than a year away and that ”there’s a lot of time to make decisions about running.”

But he did not rule out the possibility of an impending campaign announcement, and noted that Trump could often be “unpredictable” in his remarks.

“Sometimes the president is unpredictable,” Lewandowski said. “Having had the opportunity to serve next to him in several capacities, I’ll be prepared for any comments he makes.”

Lewandowski’s name came up earlier this month during a Republican National Committee meeting. They suggested he would be an excellent candidate to challenge incumbent Sen. Jeanne Shaheen.

Unfortunately for Lewandowski, the top tier Republicans in New Hampshire have shown concern over his potential run. Politico reported:

And Dave Carney, a longtime New Hampshire-based strategist who’s worked on an array of statewide Republican campaigns, called the idea of a Lewandowski candidacy a “joke.”

“He adds nothing to the ticket and doesn’t help the president or the ticket in any way,” Carney said. “Corey is a political hack. Political hacks make bad candidates generally.”

Tensions over Lewandowski are spilling into the open, with the state GOP establishment in near open revolt over the Trump loyalist’s prospective campaign. Some are voicing concerns about his personal baggage, pointing to everything from his March 2016 physical run-in with then-Breitbart reporter Michelle Fields to his messy property dispute with a neighbor.

Lewandowski’s supporters have shown polls with the former campaign manager in the lead in a primary. Bolduc’s team had another survey with “Lewandowski in a dismal position.”

notamemberofanyorganizedpolicital in reply to fscarn. | August 15, 2019 at 8:19 pm

They’re the GOP-e and we’re not good enough for them!

GOPe against him? Hard to imagine a better endorsement of him.

If he will work and vote to deport illegal aliens including visa overstayers, work and vote to impeach judges who continually dishonor their oaths to uphold the Constitution and our laws, and vote to reduce immigration, etc., he’s good.

Why not? He aborted, without causing harm, the progress of a social belligerent. And for that, he was judged and labeled by media to be unworthy. That said, show us your principles and policies.

Lewandowski could beat her, and that apparently has the GOPe in a panic. If he gets the nomination they’ll be trying to help the Dems.

He’ll win. And that is why the NH GOPe neverTrump crowd are wailing.

“….. Bolduc’s team had another survey with “Lewandowski in a dismal position.””

That must mean he is in the lead.