Who knew that focusing on community issues instead of combating climate change would be a winning platform in California? 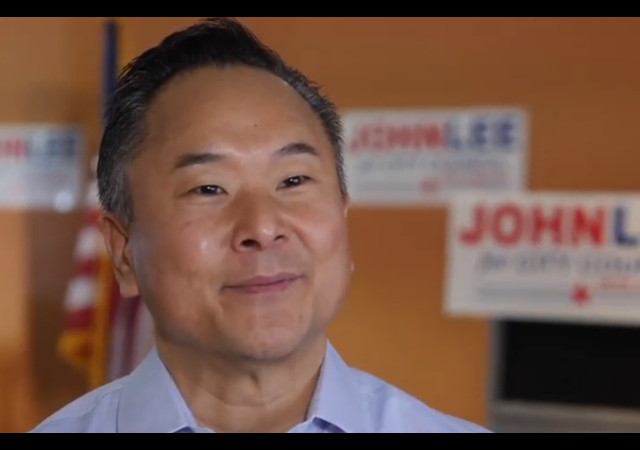 There have been some intriguing developments related to elections and California that may bode for a slightly less blue future for the Golden State.

I recently noted that the state identified over 84,000 duplicate voter registrations during a detailed audit of rolls in the wake of Motor-Voter implementation.

Now, a Republican won a seat in a recent Los Angeles City Council election, beating an enthusiastic advocate of the Green New Deal.

John Lee appears to have won the race to represent the northwest San Fernando Valley on the L.A. City Council, bringing an unofficial end to a contest that reflected a changing part of L.A., but not enough to flip a traditionally conservative seat on a mostly Democrat dais.

With 100% of precincts counted, the final tally Tuesday night showed Lee with 16,724 votes, and opponent Loraine Lundquist with 15,395 votes, according to the Los Angeles County Registrar-Recorder. And that was enough for Lee to claim a victory.

“I feel great,” Lee said as a group of supporters cheered him on at his Porter Ranch headquarters. “We’re celebrating tonight and tomorrow we’re going to work. We’ll start talking about how to bring this community together. We’re realizing that we have the same goals and we need to start working towards those goals.”

One analysis of the result came through the classic racialist lens.

For the first time ever, the Los Angeles City Council will likely have two Asian Americans serving at the same time.

…Lee joins Democratic Councilman David Ryu, who is Korean American, as the second Asian American member to currently serve on the city council.

Astrophysicist and college educator Loraine Lundquist ran for office with a promise to take on the status quo, saying she would shake up Los Angeles City Hall by ending “pay-to-play politics” and scrutinizing decisions with the eye of a scientist.

Lundquist’s bid for a seat on the City Council energized Democrats, environmentalists and progressive activists eager to win over a San Fernando Valley district long represented by Republicans.

But Lundquist ran into a buzz saw of opposition from some of City Hall’s most experienced players, including business groups, the police officers’ union and former council members who represented the northwest Valley for generations. All lined up behind longtime City Hall aide John Lee, who emerged victorious Wednesday.

Who knew that focusing on community issues instead of combating climate change and weaning the city off fossil fuels would be a winning platform in California?

Finally, residents of the #Resistance state that has sued the Trump administration more than 50 times have donated more money to the Trump 2020 campaign than to most Democratic candidates currently in the 2020 race.

Donald Trump raised $3.2m in California since the beginning of this year, according to campaign finance data analyzed by CalMatters, a not-for-profit news organization focused on California issues.

Trump beat out everybody in the field except for Senator Kamala Harris, who raised $7.5m, and Mayor Pete Buttigieg, who raised $5.1m. Harris, who is California’s junior senator, has been leading in donations from the state since launching her campaign in January.

Admittedly, the state has a long way to go to recover from the nadir of conservatism experienced in November 2018. However, these are some of the first hopeful signs I have seen in some time.

In the end, it doesn’t matter that he is Asian, does it? Since he has an R next to his name, he is a flaming racist.

notamemberofanyorganizedpolicital in reply to legacyrepublican. | August 16, 2019 at 1:48 pm

Door to door common sense campaigning can win the day.
President Trump taught America, or should I have said, reminded America, that if you outworked the next guy you win the day!

I live in Lee’s district. There are two main reasons why he won.

1. Over the past couple of years, the transient population in our area has exploded. You see them everywhere, and virtually all of them are mentally ill and/or drug addicts. They camp out (complete with tents and sleeping bags) on sidewalks, parking lots, parks…any public open space. They harass or even physically attack innocent bystanders, leave trash everywhere, openly shoot up/deal drugs, publicly do their bodily functions, publicly masturbate, publicly have sex, and steal everything that isn’t nailed down. They have turned what not so long ago was a pretty nice, quiet, safe area into a war zone. I no longer feel secure here. I doubt anyone does. It’s THE issue around here.
Everyone is freaking out about it, and no one in power in L.A. seems to give a damn about us. I don’t know how effective Lee will actually be on this issue, but he’s certainly light-years better than Lundquist, who seemed happy to turn over the whole damn district to criminals.

2. The public employee unions, which, of course, have been strongly Democrat forever, are beginning to turn against the party because of the Green New Deal. It’s beginning to dawn on them that “going green” means “going jobless.” They were backing Lee big time.

Obama himself said when you do the same thing for 50 years and it doesn’t work try something new. Well liberalism failed.

Maybe some people in California are waking up to the disasters for whom they voted earlier. Yet Lundquist managed to garner in excess of 15 thousand votes, so I’m not that optimistic about Republican chances in CA.

The Republican Party is largely frozen out of the State of California, and so the State Legislature has been running amuck. There is no end in sight.

notamemberofanyorganizedpolicital in reply to Valerie. | August 16, 2019 at 1:49 pm

Maybe we can RICO them.

Does RICO apply to “government” agencies?

The GOP is frozen out of California because of the GOP.

Their motto: “Unless it’s easy, we sell-out to sleazy.”

The candidate is American, not Asian. Why do you have to hyphenate ANYthing?
E Pluribus Unum……from many, one.

While I agree with you philosophically, it’s important that Lee is of Asian background in California. The GOP is actively courting Asian-American and religious Hispanic candidates to run against white Marxist types in LA and Orange County:

i heard both of them speak at an informal public Q&A session, here in The Valley.

you couldn’t pin Lorraine down on any issue, and most of her answers involved more spending/more government.

John was honest about issues and what could be done.

glad to see he won. if only my councilman was like him.

Until I see another hundreds Republicans elected to offices around California, I have to think this is just a blip, not a trend.

I mean. it is California after all.

But get ready to be constantly and continuously harassed and assaulted (in all forms) from the deranged left for beating the climate change nincompoop. Get ready for you and your family’s and friend’s lives to be threatened along with your house and vehicles to be vandalized on a daily basis.

The leftist scum in this country knows no bounds…