Rep. Will Hurd Will Not Seek Re-Election

Rep. Will Hurd Will Not Seek Re-Election 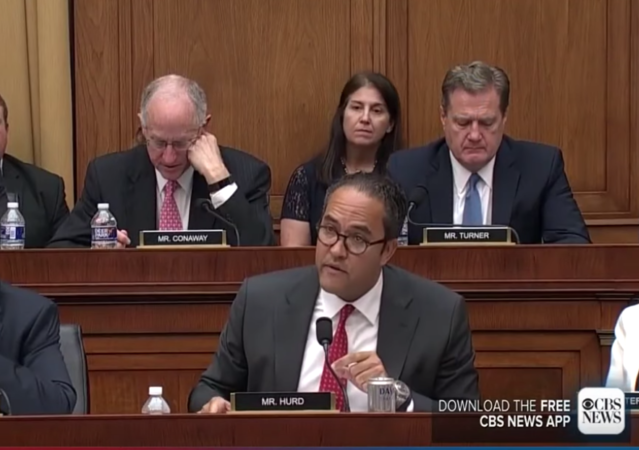 Texas Republican Congressman Will Hurd announced Thursday night that he will not seek re-election, making Hurd the sixth Republican to announce retirement in a matter of weeks.

Prior to joining Congress, Hurd worked for the CIA.

In a series of tweets, Hurd sort of kind of explained his decision:

I left a job I loved as an undercover officer in the CIA to meet what I believed to be a need for new leadership in Congress on intelligence and national security matters. I wanted to help the Intelligence Community in a different way.

We're in a geopolitical competition with China. There is a global race to be the leader in artificial intelligence. We face cyberattacks every day. Extreme poverty, lack of economic opportunity and violence in Central America is placing unbearable pressure on our borders.

When I took the oath of office after joining the CIA, I swore to support and defend the Constitution of the United States against all its enemies. I took the same oath on my first day in Congress. This oath doesn’t have a statute of limitations.

I’ve taken a conservative message to places that don’t often hear it. I'm going to say involved in politics to help make sure the Republican Party looks like America.

Hurd eeked by in the 2018 election, winning by less than half a point and represents a district that is trending Democrat. It’s likely that the grandstanding and posturing is legit… it’s just as likely he’s reading the writing on the wall and bowing out instead of facing an electoral loss.

With Will Hurd’s retirement in TX-23, the district goes from tossup to lean D. But worth remembering that is only so b/c a court redrew the original GOP map (below) which replaced high voting Latinos (orange) with low voting, more rural ones (green). #fairmaps #txlege #TX23 1/ pic.twitter.com/VNjQTEKxGk

Hurd was mostly acted like a Democrat and as far as I’m concerned he’s just another RINO. Good riddance!

I’m sure the writing was on the wall and by helping the country in the private sector he really means fating his wallet!

Yep, reading between the lines, his retirement statement says “I’m going to get rich lobbying for Palantir and their ilk.”

I’ve been saying this since he was touring the country with Beto and campaigning against Ted Cruz.

He was touring the country with BETO? Really?? Wow….. How odd; Beto is such an empty suit.

yeah, he and Beto are big pals. The main reason I’m so glad to see him go!

notamemberofanyorganizedpolicital in reply to Close The Fed. | August 2, 2019 at 2:22 pm

ever seen the unbelievably creepy photo of good “friends” Obama and Richard Branson?

On a side note, I see that LI is studiously avoiding James Comey being referred for criminal prosecution

That’s not news for LI, but a cat fight over silly tweets is? Got it!

is it case sensitive?

Hurd’s loss of popularity is his own fault. If he would have stumped in his district, he would have won. But he got complacent, working in DC – instead of sufficiently pressing the flesh in his home district.

He’s from a majority mexican redistrict, but it should be redrawn after the census.

America was great when we had the Communists against the ropes and the people ripe for democracy. Remember Tienanmen? I guess cheap trinkets made by slave labor is more important than remembering Communism’s stated goal is to destroy capitalism. Good luck!

I remember those days as well. Some Democrat called Richard M. Nixon, with the help of Herr Doktor Heinrich Kissinger, sold out to the communists in Red China.

That was part of a brilliant strategery to separate the powerful USSR from the still weak PRC.

This is what handed the ouse to the left in 2018. IT wasn’t policies it was the incumbents turned their backs on America because they were in many cases RINOS.

notamemberofanyorganizedpolicital in reply to 2smartforlibs. | August 2, 2019 at 2:24 pm

Yes it was the GOPe plan.

Remember Ryan and also how many Republican DCers’ were bragging about voting for Hilary?

Addition by subtraction. I’ve heard there are true blue conservatives in TX. Maybe one of them will grab Trump’s coattails and ride to victory? Could happen!

Candidate! We need a candidate that people can happily vote for!

Call it the Arlen Specter Syndrome (after the Democrat-turned-Republican-turned-Democrat ex-Senator). Hurd’s turn to the Left alienated conservatives and independents while failing to attract communist voters.

Hurd also lived up to the stereotype of CIA as KGB Lite -working to preserve, protect, and defend enemies of the Constitution. Of all government bureaucracies with a totalitarian streak only the FBI and BATF are worse (with the IRS getting dishonorable mention – unlike the CIA, FBI and BATF the IRS has not murdered innocent people, to my knowledge).