“Rep. Joaquin Castro’s plan to shame a group of donors to President Trump is having the opposite effect” 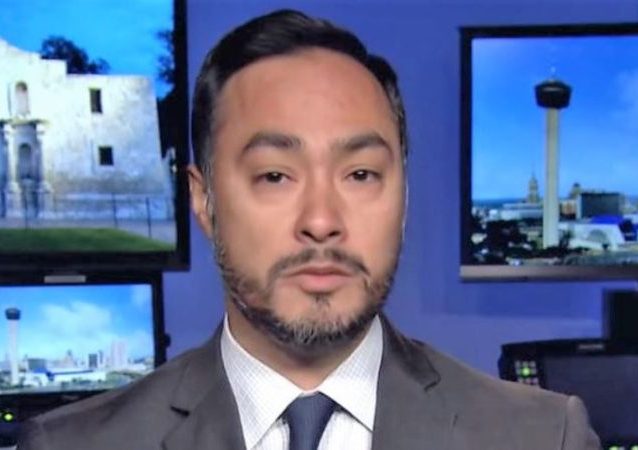 Leftist projection is something that we once had to work to prove and often could not (at least to skeptics), but after the 2008 election of Barack Obama as president, it became a bit easier because the Obama executive branch was busily silencing and undermining conservative and/or Tea Party voices while publicly speaking about transparency, tolerance, equity, and fairness.

Hillary Clinton’s phantom “vast right-wing conspiracy” of the 1990’s was replaced with the right’s understanding that there may indeed be a “vast left-wing conspiracy.”  The very thing she claimed was aligned against her and was completely imaginary was actually just how the left rolls.

And we’re seeing it vividly today.  Since President Trump was duly elected our nation’s president, #TheResistance has been in overdrive.  Donning “pussy hats” or masks and all-black gear, the anti-Trumpers dance on the edge of civility and even of criminality.

Their goal has become increasingly apparent since President Trump took office: get rid of Trump. Because Orange Man Bad.  One of the cues the current leftist “resistance” is taking came from then-presidential candidate Hillary Clinton (D-NY): the people who support Trump are “deplorables.”  They are less than human, less than those on the fat-cat, self-satisfied progressive left.

Fast forward to July of this year and leftist outlets insist that anyone who supports the “racist” and “white supremacist” Trump is clearly, themselves, a racist white supremacist.  The left’s “war,” then, goes beyond Trump and even beyond the GOP to everyday normal American voters.

So pernicious is this self-destructive Democrat demagoguery that Rep. Joaquin Castro (D-TX) published a boycott and intimidation hit list via Twitter.  This is indicative of the new Democrats’ view of citizen representation in Congress:  if you don’t vote (D), I not only don’t support or represent you in my duly-elected role as your Congressional representative, but I will “out” you as “other.” How that plays out is out of my hands.  And stuff.

In short, Democrat Congress-critters don’t support ALL of their constituents; they represent only those who share their views and walk in lock-step parrot mode.  And they want you to know it. They want you to feel it and to be cowed by it, to bow to their power, to quiver before their intimidation, to succumb to their bullying.  They want you afraid to speak your mind; if you do, they promise they will run your out of the public sphere, harm you and/or your family, get you fired, and otherwise destroy your livelihood and that of your family.

Initially, Castro’s hit list resulted in a lot of death threats and other hate directed at those listed and at their workplaces/investments/businesses.

But a funny thing happened on the way to Castro’s war on his own constituents: Trump supporters are fighting back . . . with their wallets.

Rep. Joaquin Castro’s plan to shame a group of donors to President Trump is having the opposite effect.

One of the individuals named by the Texas Democrat estimates that the lawmaker’s actions have spurred donors to give more than $1 million toward Trump’s reelection effort in recent days.

R. H. Bowman told the Washington Examiner his fellow members of “Texas 44,” as the San Antonio-based donors refer to themselves, have been on a fundraising frenzy since Castro tweeted about them on Monday, “Their contributions are fueling a campaign of hate that labels Hispanic immigrants as ‘invaders.'”

Bowman, an attorney, said that didn’t go down well with he and his fellow donors.

“My phone’s been lit up for two days with calls from many of the Texas 44 and others of our friends here in Texas who are outraged by Castro’s comments,” Bowman said. “It looks like another million dollars is now headed to support the Trump 2020 campaign from those of us who were targeted, and other Texans, including Hispanics, incidentally, whose resolve to support [the president] is only strengthened by this personal attack.”

So, wait, normal Americans won’t be bullied by self-inflated SJW’s declaring economic, socio-political,and psychological war on them? What a shame Castro didn’t take some time to assess his opponents.  The lunatic left may be susceptible to bullying and peer-pressure, but free-thinking normal Americans are not.

In fact, the exact opposite effect is happening across the nation as even Texas governor Greg Abbott (R) got into the buycott action.

So if you see me starting to get thinner and toned don’t ask me why.

Hey, Gracie, sign me up for some hate pizza.  Or, oooh, for some culturally-appropriated Taco Bell hate burritos.

Okay here’s a few more companies:
– Apple Bees
– Outback Steakhouse
– Urban Outfitters
– Coachella
– Target (they support both liberal and conservative so take what you will from that)

A popular Michigan restaurant chain is firing back in defense of free speech after internet sleuths uncovered its political donations to President Trump.

. . . . “My political beliefs, at their core, come from being a Christian,” Mr. Chu told the Fox affiliate. “More specifically, from studying the Bible and paying attention to the kind of society God wants people to live in, as well as from working to apprentice myself to Jesus’ teachings on how to treat other people.”

Anna’s House owner Josh Beckett responded to the backlash in a statement Thursday, saying he’s “proud” to live in a country where free speech is celebrated.

The radical left’s attack on advertisers, businesses, and even (especially) individuals is repellent and must be condemned.  Happily, we can condemn their anti-business, anti-American lunacy while enjoying a delicious meal from any of their latest targets.

We might enjoy the hate-eating, but some some of that food, Taco Bell notably, will hate on your lower intestines and colon.

But I’m really in the mood for a Big Mac and well done fries tonight.

I’m confused. Are there any non-food oriented companies that support the president? Is he now to be known as the Food Franchise President?

I love unexpected consequences and am looking forward to seeing Trump elected to a 2nd term.

Every day I come to appreciate McCarthy more, we need someone to start dealing with all the slime which has been invading Congress.

Joseph McCarthy? Yes, it seems he was prescient, doesn’t it?

I figured out that if we all buy stock in every company involved with food that the left will starve to death.

They will boycott everything.

By this time next year no more leftists. 😉