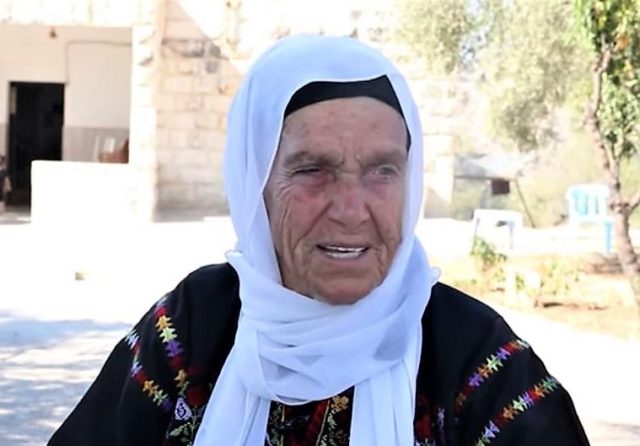 The remark comes a day after Congresswoman Tlaib rejected Israel’s offer to grant her entry on humanitarian basis to see her 90-year-old grandmother. The Israeli decision was made in response to a written request made by Tlaib herself. “I would like to request admittance to Israel in order to visit my relatives, and specifically my grandmother, who is in her 90s and lives in Beit Ur al-Fouqa,” she wrote in a letter addressed to Israel’s Interior Ministry. In her formal request, she agreed not to promote anti-Israel boycott activities, or the Boycott, Divestment and Sanctions (BDS) campaign.

After Israel granted the request, Tlaib changed her tune, accusing Israel of “racism” and “oppression.” “I have decided that visiting my grandmother under these oppressive conditions stands against everything I believe in,” the congresswomen tweeted.

Reuters reported the comments made by Tlaib’s grandmother:

Sitting under an olive tree in the Israeli-occupied West Bank, Muftia Tlaib scoffs at the attention she has recently received from the president of the United States.

Tlaib is the grandmother of U.S. congresswoman Rashida Tlaib, at the center of an affair that has drawn Donald Trump and Israeli Prime Minister Benjamin Netanyahu together against U.S. Democrats. (…)

Her son, Rashida’s uncle Bassam Tlaib, said the women had not seen each other since 2006:

“She was going to slaughter a sheep when Rashida arrived and prepare her favorite food, stuffed vine leave.[“]

Initially, Tlaib was to accompany Congresswoman Ilhan Omar on a four-day trip to Israel set for next week. The duo was to meet Palestinian groups that sought destruction of Israel, and had ties to terrorist groups. Israel denied the visa for that visit on Thursday, triggering hysterical response from senior Democrats and mainstream media.

“[T]he itinerary of the two congresswomen reveals that the sole purpose of their visit is to harm Israel and increase incitement against it,” Israeli Prime Minister Benjamin Netanyahu said. “In addition, the organization that is funding their trip is Miftah, which is an avid supporter of BDS, and among whose members are those who have expressed support for terrorism against Israel.”

The Palestinian organisation sponsoring their trip, Miftah, has a history of spreading Antisemitism and incitement, the research done by the watchdog group NGO Monitor shows. The organization is funded by several EU countries and the United Nations, JNS news agency reported.

her irony meter will explode.

God blesses those who bless Israel…..

So what about those who Curse Israel…..?

Are we sure that is not a picture of Rashida Tlaib’s 90-year-old grandfather?

Islam commands that men grow beards and women shave their beards off.

many Muslims shave much of what makes a woman off. That is probably why Onar is such a sorry POS.

Yeah, it’s tough trying to catch a pint of acid on the fly… Speaking of flies, I bet Palestine is rich in flying protein. They certainly teach their children how to hate well… Not as good as the Iranians or Turks perhaps, but still they arise to a certain pedestrian standard…like every other turd in a punch bowl. Show the troops on the hillsides some love granny, cover your face.

Better to setup a palestinian powered Soylent Green production facility. I bet it would taste as foul as their mentality.

Now we know where Tlaib got her looks from.

Not a “woman of color”, either way. Looks pretty white to me, especially compared to most Israeli Jews, who are supposedly “white colonialists”. Go figure.

Clearly, the grandmother of a proud real American. If we just keep pretending they’re the same and let them bring more in maybe they’ll take pity on us and let us live here as their dhimmi

It’s interesting that you’d write this story without mentioning that Israel originally said the Congresswoman could come without conditions, but then Trump used his public office to convince Israel to deny the visa. Idk, maybe that’s some relevant context. Or maybe the fact that, she agreed to follow the restrictions privately, but then Israel published her letter, and used it to legitimize the restriction on visitors to the West Bank. Also maybe relevant.

Which statement of mine here do you think is false?

Everything you write is a lie. It’s what you get paid a cheap wage to do.

“Israel originally said the Congresswoman could come without conditions”

No. The U.S. Ambassador to Israel said they could visit, except he never spoke to anyone in the Israeli government. He was pulling that out of his rear.

“then Trump used his public office to convince Israel to deny the visa.”

No. Israeli law forbids foreigners to come into the country who call for a boycott of Israel.

This is just idiotic:

“she agreed to follow the restrictions privately, but then Israel published her letter, and used it to legitimize the restriction on visitors to the West Bank.”

First, a letter from a member of Congress to a government official of another country is not private. Sorry, was there classified info. in that letter written in invisible ink only you know about? Second, when a nation says “as long as you don’t break our laws, you are welcome” that = restriction on West Bank visitors? I know you’ve typed a bunch of words, but have you ever bothered to consider what those words really mean?

For some weird reason, all you can see is manipulation out the yin-yang from Israel and Trump (which isn’t there), but you can’t see the manipulation from this anti-Semitic dunce (which is there), who couldn’t even call her trip to Israel a “trip to Israel” but a trip to Palestine, which is, what? Oh yeah, a non-country. She wasn’t going to meet with anyone from the Israeli government, she was only going to meet with haters of the Israel government. And I don’t mean “haters” like college-age illiterates use the word today. I mean people with an actual, burn-Israel-to-the-ground hatred to their core.

But, please, keep thinking you’re the smart one. We all know fake moral superiority is what matters most in life.

The fact that you would make this comment without mentioning Rep. Tlaib’s recently released itinerary which shows her desire to actually travel to “Palestine” and arranges for NO meetings with Israeli officials, clearly shows your bias.
This is certainly relevant context, that YOU omitted.
What is your real agenda in posting here?

Yeah, that’s great, isn’t it. President Trump seems to have a certain knack in tweaking a situation to advance America… Sometimes that’s standing on the back of the heads of the disgruntled masses. MUCH better than spending 6 months on saying NO, while worrying about useless things. If the Pali’s wanted respect it would be good to show just a little respect.

Now we know where Talib gets her charm and charisma from.

Yeesh. In this case I support the burqa.

The actual words are, “May Allah ruin him.” This is an important point since Allah is most definitely NOT the Lord of Judaism, Christianity.

Lovely people, those Muslims. Always positive, looking for the best in others.

Poster girl for why marrying your cousin should be a crime. It results in more than IQ depression.

May God bless both of these women to the same extent they have blessed their neighbors.

God has already done a job on her face.

Tlaib, granny or both?

embrace the power of “and”, as we sat at Ace Of Spades HQ!

The camels look better than these hags.

Spoken like the voice of Islam. She sure does look a lot like a man. So does her “granddaughter”.

Is it just me or does she really look like Bob Newhart????

Oppression to her is the very “existence” of Israel.

oh- and Trump has keep them in the spot light for ANOTHER news cycle.

Get used to it, he’s going to play these girls like marionette dolls all the way through the election.

Those girls deserve to be played.

May the blue bird of happiness fly up her nose–and defecate.

May the blue bird of happiness fly up her nose–and detonate.

in the end, the sheep comes out as the real winner

Another terrorist that hates Jews more than they love their children.

I thought that culture did not have much respect for women. Did I miss something here, like they really do care about women. Darn I miss the memo.

Speaking of caring for their women, young palestinian girls are routinely raped by males like cousins, uncles, brothers and even their fathers. If this happens in Israel, rapists are prosecuted, if they are in palestinian areas they better keep their mouths shut, grin and bear it.

notamemberofanyorganizedpolicital in reply to JusticeDelivered. | August 18, 2019 at 6:16 pm

nadler in a scarf?

What “little” Jerry Lewis Nadler calls a scarf the rest of us call a parachute.

Joseph wants his technicolor dreamcoat back.

In the words of Carnac the Magnificent:

“May the fleas of a thousand
camels nest in your shorts.”

“May you fall asleep under a camel with post nasal drip.”

And many, many more.

So is John Brennan really her Grandmother?

notamemberofanyorganizedpolicital in reply to Charles_Smith. | August 18, 2019 at 6:15 pm

And her grandfather too!

Maybe she’ll die soon. ….Just saying. Then Tlaib won’t have to lie anymore about this subject.

You guys got it all wrong. Grampa Tlaib is really Hugh Brannum, aka Mr. Green Jeans.

BTW, if Congressman Tlaib wanted to go visit grampa, she didn’t need to make it a high profile event. Just go and STFU. No need to grandstand. Shows the difference between spotlight-seeking politicos and the rest of us.

“Initially, Tlaib was to accompany Congresswoman Ilhan Omar on a four-day trip to Israel…”

This is erroneous, their itinerary showed they were traveling to the non-country “Palestine”. That, in itself, shows exactly what this was to be – a propaganda event.

Seriously? You guys are making ad hominin attacks on a 90-year-old woman? I thought ad hominin was what liberals did, not conservatives. And finally, who cares what a 90-year-old says anyway? She’s Palestinian so what do you expect?

The acorn does not fall from the tree with this one.

Golda Meier was right: Peace will come when the Arabs will love their children more than they hate us.

And they have not stopped hating even a little bit. Instead, they infest the US with their hatred, perhaps their only viable export. Cheers –

What she actually said was, “May Allah ruin him.”

There’s a difference. Reuters knows it. That’s why they consistently misquote.

Hey…
Anyone else think her 90-year-old grandma looks a lot like a 60-year-old uncle?
Are we being played in more ways than one here?