But . . . “Walsh’s program will have to be removed as soon as he becomes a viable and legal candidate for President” 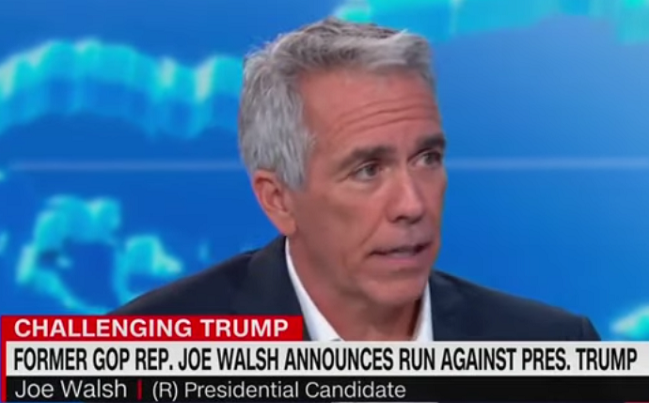 On Sunday, we noted that “One-term Rep. and Radio Host Joe Walsh Announces Primary Challenge to Trump.” It seems that Walsh may soon be a “former” radio host.

In an interview with CNN on Monday, Walsh stated he lost his radio show. He also implied it happened as a result of his #NeverTrump primary challenge to President Trump, who is very popular with Walsh’s radio listeners.

Walsh has now said that he lost his nationally syndicated radio show during a CNN interview after he revealed that the majority of his listeners are pro-Trump.

“I just found out that I lost my national radio show. So that’s gone, but I figure that might happen, John,” Walsh told CNN on Monday.

Walsh said that he found out he had lost the radio show moments before he went on air with CNN.

However, his explanation does not match the one given by the Salem Radio Network.  Salem based its cancellation of Walsh’s radio show’s national distribution on him becoming a “viable and legal” presidential candidate.

The conservative had broadcast his show through Salem Radio Network. He also has a podcast connected to “AM560 The Answer” in Chicago. Salem told CBS in a statement on Tuesday that affiliates can continue to receive Walsh’s program from a different syndicator “to be selected by Joe Walsh” after 30 days.

“This announcement does not affect Joe Walsh’s local program airing on AM 560 The Answer in Chicago, however Walsh’s program will have to be removed as soon as he becomes a viable and legal candidate for President,” Salem added.

In other words, the decision appears to have nothing to do with his audience or him running as a #NeverTrumper.  The result would be the same if he chose to run as a Democrat or Independent, etc.

Given that he has little to no chance of winning the GOP nomination, this wouldn’t be a problem for a #NeverTrump Republican because they tend to land cushy gigs at CNN or MSNBC. But Walsh may find his history of inflammatory statements makes him unemployable by even these fringe leftstream media outlets.

Losing a show by not appealing to your audience? I am shocked, shocked.

The Cop Rock of candidates.

Thanks for the memories!

I’m in the very tiny minority who thought Cop Rock was fantastic, and I’d forgotten about that show until now. I wonder if anyone kept a copy of the last episode, where the proverbial Fat Woman swung down from the ceiling, singing her heart out: after all, it ain’t over till the Fat Woman Sings!

Walsh is clearly a glutton for punishment, setting himself up for another loss.

When Trump announced for President, he had a very strong show “The Apprentice”, He dropped that because of his run.

Did Walsh think anything different would apply to him.

A clear career limiting move. All he had to do was get on the Trump train. As the song said you don’t need a weatherman to know which way the wind is blowing.

Meanwhile, Trump sucks all of the air out of the room, again.

Axios (whatever that is) sat back and said GEEEEE, let’s see, what can we make up today to embarrass the President? Then they said, “why don’t we say he wants to bomb a hurricane, that should do it!” The media in our Country is totally out of control!

The man is the consummate handler of hecklers.

Anyone who thinks Joe Walsh has even a particle of a chance should watch this video which analyzes Joe’s meltdown, during his single term as a Congressman, while he was at a Townhall meeting with his constituents; he abuses them, yells at them, threatens to kick them out of the public place they’re in- it’s quite a performance!

The only Joe Walsh, with a (ham) radio, that ever mattered to me was with The James Gang and, reportedly, The Eagles.

What Walsh does not understand is that Trump is NOT a Republican or a conservative. He prevented Hillary. That is the STANDARD for comparison.

Otherwise, I have never heard of this guy, before.

“Cap’n Bill Kristol said I could be on the bridge”

This guy is almost as bad a loser as Jebbie Bushite

Walsh’s show is still on the air in Chicago with a guest host…”Sean from Elmwood Park,” a frequent caller to The program. I guess that says it all. You too, can be a radio talk show host.

if you lose your show because you turned off your audience isn’t that the way its suppose to work?

With his racist comments, he could work for the New York Times.

OK. Step back. In all likelihood he was already informed his contract would no be renewed. He was pulling in way less than some smaller radio talkers that were not serving his stations. Way less. The audience was losing interest in his pugnacious shtick.
He is running because he was getting cancelled and now is trying to use that to propel him to another gig.
As Laura Ingraham said tonite re other Never Trumpers, they are Dead Enders.

I thought that also. Thing is, I don’t think he’s going to find another gig, especially after this stunt. As far as his public life, he’s finished.

#NeverTrump: “I’d rather have a mad socialist witch as U.S. President than Trump. Because, I don’t like that man.

Perhaps there’s some logic to conservative #NeverTrump, but it sure is hard to find. You have a visceral dislike to Trump, therefore you’d prefer to give the Supreme Court and much of the federal judiciary to, umm, Bernie Sanders’ choices? You don’t like trump, and you’d accept nationalized health care as an acceptable price for that?

Well, yes, I don’t think I’d much care to have Trump as a friend, let alone try to do business with him. But, that’s not what I’m voting for. Is #NeverTrump just a temper tantrum, or, given the actually-existing alternatives, is there actually some rational argument for it? Or is it just #1984 unbellyfeel?

That’s true of people like Jonah Goldberg. Others, like Bill Kristol and Max Boot are liberals regarding social issues and are upset because Trump doesn’t pursue their goal of never-ending war.

Joe Walsh is proving he’s not only a nevertrumper, but dumb as a box of rocks. It is very common for people who announce for office to lose their radio/tv gigs. It’s done to protect the networks from being sued for equal time by opponents.

The never Trumpers think that if they attack the progressive fascists will give them some crumbs.

Well, we don’t need the ladies crying because the story’s sad.

It was only a matter of time before this show was cancelled–his ratings were terrible. I’m sure he just jumped on the NeverTrump band wagon to get another show. Perhaps he can join Andrew McCabe at CNN–I understand they’re always looking for “interesting” hosts and commentators.

Life’s been good to him so far.