US and China are now sparring, as ‘thuggish regime’ comment follows Chinese doxxing of American diplomat who met with protesters. 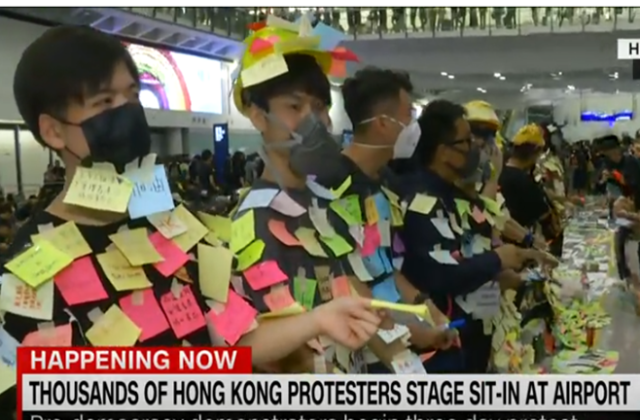 The pro-democracy movement in Hong Kong continues for the 10th week, this weekend’s event featuring a peaceful sit-in at the city’s international airport.

Hundreds of people have joined a mass sit-in at Hong Kong International Airport on Friday in a fresh round of anti-government protests designed to secure international backing for the movement.

Organisers were expecting thousands to show up, and hoped police would respect what they said would be a peaceful protest that was initially billed to last until Sunday.

Ahead of the demonstration, the airport had increased security that led to passengers experiencing delays in reaching departure gates, as airlines warned travellers to arrive early for their flights.

The protest is occurring mainly in the airport’s arrivals hall.

“You’ve arrived in a broken, torn-apart city, not the one you have once pictured,” read a pamphlet that protesters offered to arriving travelers. “Yet for this Hong Kong, we fight. We shall never surrender.”

“Revive Hong Kong, revolution of our times” — a slogan which immensely angered Beijing officials is now proudly displayed by protestors on a flag at the Hong Kong airport. #HongKongprotest #HongKong #hongkongairport pic.twitter.com/b9KtJWef85

The demonstrators are focused on obtaining 5 specific concessions from China.

The US and China are now sparring over Hong Kong.

China and the U.S. traded barbs with one another Friday as demonstrators in Hong Kong began a three-day protest at the city’s airport.

The State Department slammed the Chinese government Thursday, accusing it behaving like a “thuggish regime” after a state newspaper published personal information of an American diplomat in Hong Kong who reportedly spoke with supposed “Hong Kong independence” activists.

“I don’t think that leaking an American diplomat’s private information, pictures, names of their children – I don’t think that is a formal protest, that is what a thuggish regime would do,” State Department spokeswoman Morgan Ortagus said at a news briefing in Washington on Thursday.

Meanwhile, China has ordered the Hong Kong-based airline Cathay Pacific to suspend any staff who supports the pro-democracy protests.

Beijing’s demand coincided with a peaceful rally at Hong Kong’s airport, where thousands occupied a terminal.

A pilot and ground staff have already been suspended as a result of this move.

I’m praying for the people in Hong Kong.