Director-General Pierre Krähenbühl and other senior officials were involved in “sexual misconduct, nepotism, retaliation, discrimination and other abuses of authority, for personal gain, to suppress legitimate dissent, and to otherwise achieve their personal objectives.” 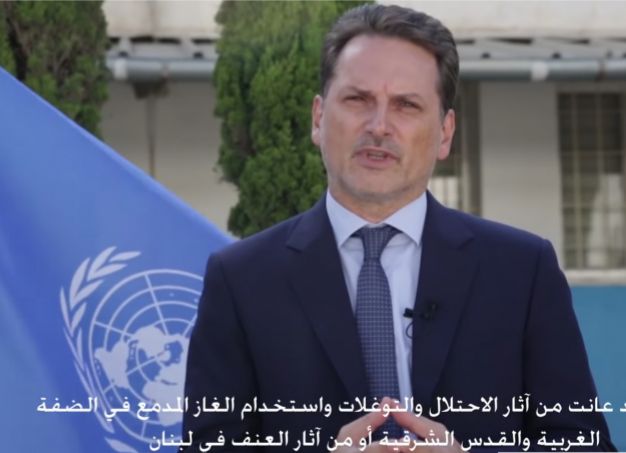 The Netherlands and Belgium have joined Switzerland in freezing funds to the United Nations Relief and Works Agency for Palestine Refugees (UNRWA) amid reports of a major corruption and sexual misconduct scandal surrounding the organization.

The report included names of top UNRWA officials, such as Director-General Pierre Krähenbühl.

Krähenbühl and other senior officials were involved in “sexual misconduct, nepotism, retaliation, discrimination and other abuses of authority, for personal gain, to suppress legitimate dissent, and to otherwise achieve their personal objectives,” a leaked internal report disclosed earlier Tuesday.

Amid mounting evidence “[t]op officials are now resigning from UNRWA, the UN relief agency for Palestinians, or being forced out,” the independent watchdog group UN Watch confirmed on Twitter. The agency’s “chief Kraehenbuehl will soon be fired for sexual misconduct and nepotism,” Hillel Neuer, head of the UN Watch, predicted.

The mainstream media attacked Trump when he chose to stop payments to the UN agency. The president’s decision “singles out Palestinian refugees and holds them, hostage,” the Washington Post commented. The New York Times called it a “vengeful and short-sighted act.” Another Times columnist wondered: “Does Trump Knows what UNRWA Does?”

As it turns out, President Trump understood the scam the UN ran under the name of ‘Palestinian relief agency,’ better than those sitting in the NYT or WaPo editorial boards.

Switzerland and the Netherlands announced they were suspending funding to the UN agency for Palestinian refugees after an ethics report obtained by international media revealed alleged abuse of authority and sexual misconduct at the agency’s highest levels.

The internal report by UNRWA’s own ethics department, a copy of which has been seen by AFP, includes allegations of mismanagement, nepotism and discrimination.

The Swiss foreign ministry told AFP in an email that it had already made its annual contribution of 22.3 million Swiss francs ($22.5 million, 20.2 million euros) to the United Nations Relief and Works Agency (UNRWA).

But Bern said it was “suspending any additional contributions” to UNRWA — already in crisis due to US funding cuts — pending the findings of United Nations investigators who are examining the ethics report.

UNRWA, led by Swiss national Pierre Krahenbuhl, has declined to comment in detail on the internal report while the UN probe is ongoing.

Belgium suspended financial payments to UNRWA after revelations of corruption and abuse of power “at the highest level of this body,” Belgian weekly Le Vif reported, quoting country’s Ministry for Development Cooperation.

Legal Insurrection has repeatedly exposed how the UNRWA was being used to promote Antisemitism and terrorism against Israel. As Professor Miriam Elman reported in November 2017, the Palestinian Authority’s textbooks, being used by all UNRWA schools, were teaching “martyrdom as a life goal.”

In an August 2018 report, Professor William A. Jacobson showed how the UN agency was “a force for anti-Semitism and anti-Israel incitement.” UNRWA “defines Palestinian refugees not only as those who fled during the Arab attempt to extinguish Israel’s 1948 birth, but also subsequent generations. This has created the political and legal myth that several million descendants of several hundred thousand refugees having a “right of return” to Israel,” he explained. [Read the full post detailing UNRWA’s track record as an antisemitic and anti-Israel organization]

While Belgium, the Netherlands, and Switzerland have frozen UNRWA funding, agency’s biggest backers, France and Germany, are yet to respond. French President Emmanuel Macron and German Chancellor Angela Merkel had scrambled to bridge the financial shortfall of roughly $360 million created by President Trump’s decision to sever ties with the agency.

notamemberofanyorganizedpolicital in reply to legacyrepublican. | August 1, 2019 at 7:13 pm

Will that Freeze stop sex trafficking?

legacyrepublican in reply to notamemberofanyorganizedpolicital. | August 1, 2019 at 10:06 pm

Great question. With the MSM not even acknowledging human trafficking as being a crisis at our border, I don’t see them ever admitting white slavery exists or that sex trafficking is a real terror in the world.

Which brings up another good question. What has the Squad done for the 300 Christian girls of Chibok who were kidnapped in 2014?

I remembered how pissed they all were, the Palestinians and the MSM were actually saying that they had a right to the money that Trump withdrew. Everybody seems to have a right to the American taxpayer’s paycheck these days.

This fund cutoff will only last until somebody points out that UNWRA is a major force fighting Israel. Once that sinks in, all is forgiven.

The most pathetic thing about that is that while the UNWRA talked a lot about fighting Israel, in reality they were always too busy raping Palestinian women to get around to doing much else.

In this case, I prefer their rapes to their fighting Israel. Those are my biases.

I’m shocked! Shocked that…oh, heck, not shocke at all.

In layman’s terms, the tin horns got caught with their hands in the cookie jar and face has to be saved.

You mean there is a UNRWA scandal involving “sexual misconduct, nepotism, retaliation, discrimination and other abuses of authority, for personal gain, to suppress legitimate dissent, and to otherwise achieve their personal objectives,” and not the blatant bias towards ‘Palestinians’ in their war against Israel??

pending the findings of United Nations investigators who are examining the ethics report.

Oh, no need for concern—those UN types are pros. They’ll have no trouble whitewashing the agency.

He described the entire UN.