Former staffer: “She comes across as an opportunist to the public. I think that’s the biggest problem” 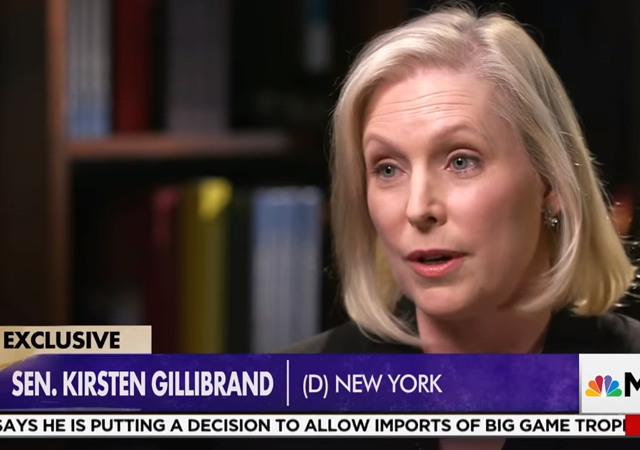 Reports are circulating that former staffers of and a fundraiser for Kirsten Gillibrand (D-NY) are urging her to drop out of the 2020 Democrat presidential primary race.  Stating that she comes across as an “opportunist” and that her debate presence is “performative and obnoxious,” the former staffers contend that she should drop out “graciously.”

It’s time for Sen. Kirsten Gillibrand’s sputtering presidential campaign to call it quits, a friend of hers and two former aides told The Post.

“It would be best if she decided that this was not her time,” said one longtime Gillibrand fundraiser, who claimed the Democratic contender’s well-heeled supporters want her to remain in the US Senate.

“Most people that I talk to are very happy with her as their senator and don’t want her to give up her Senate seat and don’t see any realistic traction for her.”

. . . .  “I don’t know that anyone even wants to see her on the debate stage. Everyone I have talked to finds her performative and obnoxious,” said a former senior staffer in Gillibrand’s Senate office.

“She comes across as an opportunist to the public. I think that’s the biggest problem,” said the staffer, who criticized the candidate’s flip-flopping on guns and immigration. “I think she’ll have to seriously evaluate her campaign and her candidacy if she doesn’t make this debate.”

“She’s not going to make it,” said another longtime friend and supporter. “What is Kirsten’s reason to stay in? She should find some gracious way that enhances her . . . as she gracefully exits and throws her conditional support to whoever does get [the nomination].”

Gillibrand has struggled to meet the debate thresholds, including for the upcoming debate.  The New York Post notes that she “has resorted to hawking T-shirts to anyone willing to chip in $1 to get her on the debate stage.”

Her role in the #MeToo takedown of Sen. Al Franken (D-MN) came under scrutiny as the movement begins to reassess its destructive, often undiscerning fervor.  Gillibrand has since tried to straddle the fence on this by claiming that maybe Franken can find a “path to redemption,” after all. Or something.

Her recent call to purge the Democratic Party of pro-life Democrats was a gamble that doesn’t seem to have paid off for her.  Likewise, her laughable plan to give voters some of their own tax money back in the form of “Democracy dollars” flagged specifically for federal political donations fell flat.

Gillibrand also has to overcome, as noted by the NY Post, the left’s disdain for her flip flop on gun rights.

.@SenGillibrand will do anything to get ahead.

In 2008, she wrote the @NRA a love letter (https://t.co/hzGNdAsJdK) and then flip-flopped when it was advantageous for her political career. @NRA members will ensure her weak campaign fails miserably. pic.twitter.com/BdI1tQnQaC

Things don’t look good for the 2020 Gillibrand presidential campaign, but according to her Twitter feed, she appears to still be all-in (as of this writing).

"Kirsten is tough. She’s a fighter through and through and she gets results… She has the strength of character to do the right thing, even if it’s hard and even if it means standing alone because that’s who she is and that’s what she’s always done." https://t.co/WUY7OAqTix

Women are half the population.

And our rights are nonnegotiable.

This #WomensEqualityDay, let’s decide that we value women. And it’s about time. pic.twitter.com/7Un7RmIn5T

Note to Gillibrand: while half the population is women, about half of them reject your stance that government should “take care” of us. This pandering nonsense will not help.

Former staffer: “She comes across as an opportunist to the public. I think that’s the biggest problem”

Com’n, that can be said of every one of the Ds. To them, “public service” means the public serves them.

Watching the video of her serving drinks, I did get the feeling she was a good time girl. You could Party with Kirsten.

NO NO NO! Absolutely not! She needs to spend every waking moment spending money and staying away from the Senate. Every moment that she is away from the center of Power is good for the rest of us. I suggest she take a chuck wagon tour of Iowa with about 200 “media representatives” and visit every town, village and neighborhood in Iowa. And keep that money flowing! The more liberal fools give to her, the less they have to give to the other socialists.

You’re absolutely right! In fact all the Democrats running should keep running right up until the last primary election is done. The more money and effort they spend on the primaries the better off Trump and the rest of the country will be.

JMO but I think “opportunistic” describes most politicians – left and right. Note I said “most”. However the appellation “lying scumbag” seems to fit most Dems better. Again – most.

But then I’m an Independent and I don’t “like” most, again – most, politicians.

opportunist, born under a lucky star I don’t care how you phrase it. She’s the very model of a privileged, white, guilty, liberal.

another white hating conservative racist. the democrats have been using racism against white people for the last 50 to 60 years. now the conservatives are going to do it too. I guess if you get non-white votes its alright.

I think you are wrong about her feeling guilty. She doesn’t care about anything but getting power.

The author of the article seems to be in search of the right word. I’m going to suggest “phony”:

notamemberofanyorganizedpolicital in reply to Grant. | August 26, 2019 at 5:01 pm

Fraud works for the descriptor for me.

But then it fits all the Dem runners.

If Gillibrand were to speak freely and openly I bet that she is pissed off that one of the leading Dems is way phonier than she is yet may be closing in on the position of “odds on favorite” to win the nomination. I am talking about The Phony Native American.

Think about the scale of Warren’s fraud relative to Gillibrand. Pretended to be Native American to advance her career… it can’t get much worse than that. Talk about cultural appropriation!

On top of that she claims to be “fighting for the little guy” yet in the past she has:

– represented big insurance and big chemicals AGAINST the little guy

Warren is the ultimate phony but with only Senile Joe and Angry Bernie in her way Warren is looking like she will be the one to challenge Trump and it is killing the likes of Gillibrand.

The Democrat potus pony will be whoever Xi of China annoints.

notamemberofanyorganizedpolicital in reply to locomotivebreath1901. | August 26, 2019 at 5:02 pm

“She comes across as an opportunist to the public. I think that’s the biggest problem”

Gracious and Gillibrand have absolutely nothing to do with each other.

Gillibrand was a congresswoman in the now New York 20th Congressional District, a once conservative district where she was a “Blue Dog” democrat extracted from conservative positions. She once voted against amnesty for illegal immigrants and voted against the Emergency Economic Stabilization Act of 2008 on the grounds of its insufficient oversight and excessive earmarks. Gillibrand’s politics are a fluid as the current NY-20, which in recent history has been re-districted from NY-18, 19, 21, and 22. This district shifts with the wind more than any other in upstate New York and so has she. Political convenience, not statesmanship is her tactic. Gillibrand, with due respect as a Senator, you’re no Daniel Patrick Moynihan or Al D’Amato. The political machine, not any native political intelligence, has pushed her along. In my opinion, politically, she is a phony and an opportunist and is one symptom of the Empire State’s slow death. It is most probable that NY will lose ANOTHER congressional seat as a result of the 2020 census. Where is the Senator’s energy and commitment to save her own State from being ranked 50th in economic freedom, rational and responsible taxes, and infrastructure, and first in residents moving to other states? She can’t save her own state, how can she lead a nation?

Hasn’t talked with me or anybody I know. Not one of us are happy with her. She represents her district, not “women”. She’s not exactly doing much for her actual upstate constituents.

When you talk to the bubble sheep, of course they are happy, they follow leftists where ever they take them.

Forevermore the word a “Gillibrand” should describe “shameless opportunist with no integrity”.

notamemberofanyorganizedpolicital in reply to dystopia. | August 26, 2019 at 5:03 pm

But it will be confusing calling all those Dem runners Gillibrand……

… a friend of hers and two former aides told The Post.

… said the staffer, who criticized the candidate’s …

…. said another longtime friend and supporter. …

In a local news story, those quotes would be associated with the names of real people, because this kind of reporting is considered unethical.

Why should national news have lower ethical standards than local news?

Don’t expect CNN, the NY Times, the WaPo or the “Alphabet Networks” to cover this.

this is the democrat senator, lawyer that said during the Cavanaugh hearings that you do not have a presumption of innocence along with five other democrat senators and for that she gets to run for president. what a freedom loving people higher education has produced.

If every self-important, grandstanding, opportunist, narcissist candidate dropped out of the presidential race…

Who in heck would we have left?

Kirsten the Barmaid may be even more vapid than Skateboard Beto (if that’s possible).

She was first appointed to fill a vacancy by a governor who was blind and senile and who himself had been lieutenant governor who ascended after the then governor was forced to resign because (if I remember correctly) dalliance witn prostitutes). Her father had been one of Albany’s top lobbyists. In short, she is a typical scumbag New York Democratic politician.Just as Nadler has been a nearly unknown hack for years until now he gets headlines as chair of the House Judiciary Committee. The once Empre State has become more and more a standing joke for the quality of its political leadership–its only rival as the country’s most corrupt state is Illinois.

The race to the White House is a chance for some more Dems to get rich just like the Obamas and the Clintons. Why would they not want to grab for the Gold Ring. Power and money – the goal of most politicians.

“She comes across as an opportunist to the public. I think that’s the biggest problem.”

Ya gotta love politics — where the “biggest problem” isn’t that your candidate is a political wh*e, it’s that the voting public is aware of it.

How are such jerks becoming elected official in this country???