Though she lags behind badly in presidential polling, Sen. Kirsten Gillibrand is the clear front-runner in the race to out-extreme other Democratic presidential candidates on the issue of abortion. 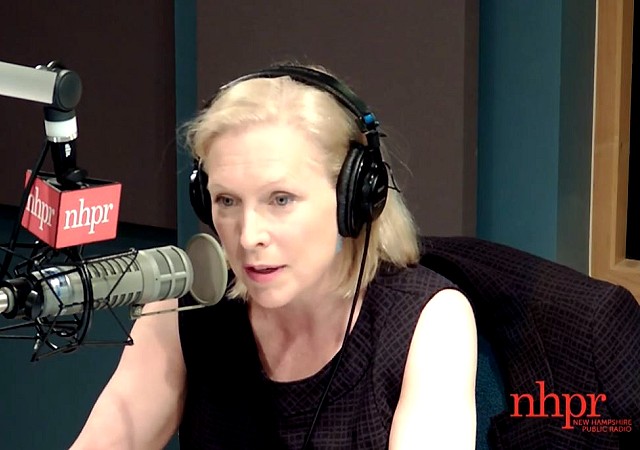 When it comes to abortion rights, Sen. Kirsten Gillibrand (D-NY) seems hell-bent on establishing herself as the Democratic party’s most unconditional supporter of a woman’s “right to choose.” She’s made a number of alarming statements in recent weeks to prove it.

In the immediate aftermath of the fetal heartbeat bills that were signed into law in Georgia and Alabama in May, the 2020 presidential candidate told the Washington Post that being pro-abortion should be a “non-negotiable” position in the Democratic party:

“As a party, we should be 100 percent pro-choice, and it should be nonnegotiable,” Gillibrand said in our interview. “We should not settle for less, and if our party cannot support women’s basic human rights, their fundamental freedoms to make decisions about their bodies and their futures, then we are not the party of women. … I will not compromise on women’s reproductive freedom.”

During a press conference around that same time, Gillibrand invoked her Christian faith in an attempt to shame Christian voters who are pro-life:

She also said in an interview with MSNBC that “action” must be taken against Trump-nominated Supreme Court Justices Brett Kavanaugh and Neil Gorsuch if they don’t uphold Roe v. Wade:

“That is the law of the land, and I think both Gorsuch and Kavanaugh lied to the Judiciary Committee when they said they would uphold precedent. And if they then go back on this — this statement they made during their confirmation hearings — I think we should look towards what we will do to address it, because we need far more oversight and accountability over these Supreme Court Justices, and if they lied in their hearings, then we should take action.”

Gillibrand, who is also on board with the movement to purge pro-lifers from her party, did not specify the type of “action” she believed should be taken, but presumably she was talking about impeachment.

During a campaign swing through Iowa earlier this month, Gillibrand sat down for an interview with the Des Moines Register and went on an extreme rant, equating appointing pro-life judges to appointing judges who were racist, homophobic, or anti-Semitic:

“I think there’s some issues that have such moral clarity that we have as a society decided that the other side is not acceptable,” Gillibrand said during an interview with the Des Moines Register on Tuesday

“Imagine saying that it’s OK to appoint a judge who’s racist, or anti-Semitic, or homophobic,” she continued. “Asking someone to appoint someone who takes away basic human rights of any group of people in America … I don’t think those are political issues anymore.”

She then tried to turn her argument into one that revolved around “the separation of church and state”:

“All these efforts by President Trump, and other ultra-radical conservative judges and justices to impose their faith on Americans is contrary to our Constitution, and that’s what this is,” Gillibrand said.

Because only people of faith can be opposed to abortion on demand? That’s a ridiculous argument, and she should know better.

Her comments on disqualifying pro-lifers from being judges, and equating being anti-abortion to being a racist, homophobe, or anti-Semite sparked outrage among conservatives and others who are pro-life. Gillibrand was asked last week on New Hampshire Public Radio if she stood by her remarks:

“You’ve seemed to suggest recently that appointing a judge who opposes abortion rights is akin to supporting judicial nominees who hold racist views. Suggesting that there is no moral other side to the abortion debate. Is that what you believe?” Biello asked.

“So the point I was making is that we believe in settled precedent in this country,” Gillibrand responded. “And we have settled precedent to make sure we value everyone and don’t discriminate on race, gender or religious backgrounds.”

Gillibrand added how it was important for judges and judicial nominees to respect precedent including recent precedent on marriage equality for the LGBT community.

When Biello pressed her on the comparison, Gillibrand stated that her comments had “nothing to do with personal views,” and instead was about “settled precedent.”

“I don’t think it’s legitimate to appoint a judge who doesn’t believe in women’s equality. I don’t because it’s settled precedent,” Gillibrand said.

Because her polling numbers have been in the cellar, Gillibrand has been desperate to gain traction over the last couple of months. Clearly she views going the far left route when it comes to abortion as a way to move the needle.

In some ways she’s become the Alyssa Milano of presidential candidates, where there is no line she will not cross to justify her ghoulish absolutist position on the right to terminate an unborn life.

So far, it hasn’t helped her polling numbers. But though she badly lags behind in presidential polling, Sen. Gillibrand is the clear front-runner in the race to out-extreme other Democratic presidential candidates on the issue of abortion.

A true unprincipled reprobate. She once represented big tabacco. She even stabbed the Clinton’s in the back.

Jerry Solomon must be flipping in his grave. I miss him.

I know her when she was an upstate politician. She was a conservative. She changes all the time.

This creepy dumbass should not be a United States Senator.

We can ask how our country became such a circus, but all one needs to do is look at how we surrendered our educational system to dumbasses like Gillibrand.

Bohner/McCain/GOPe Insurance Company: we insure(d) your freedom. Not very well, and admittedly you paid high premiums, but were dumb enough to trust us.

I’ve said it before, I’ll say it again. There are no moderate Democrats in the race. Even the most moderate of them, the most squishy squish, will mindlessly toe the Narrative line: Tax the rich-middleclass-moneyed into slavery, give free stuff to get votes, open the border to everybody, regulate all economic activity into the ground in order to make an undetectable change in world CO2 levels (and a huge increase in special interest bank accounts), and abortion on demand until delivery.

Every one of them. Every. Darned. One.

Abortion is the Slavery of our time. It makes sense that the Party of Slavery would be the Party of Killing Babies.

A human life from conception. A human life with a presumptive consciousness from around the fifth week. Pro-Choice/selective-child is two, perhaps three choices, too late. The wicked solution requires a summary judgment, cruel and unusual punishment, and age discrimination.

Meanwhile… A cocktail, an overpriced cocktail, the fleecing of vulnerable women (and taxpayers). Part of a sacrificial rite.

I agree. Stop trying to impose your secular leftism on other people, Kirsten.

If opposing baby killing is imposing your religious beliefs on others, so is opposing murder, infanticide, elder abuse, rape, incest, torture, etc.

But, even most atheists oppose those things, so “imposing religious beliefs” is a bogus argument against abortion!

Judging from who they send to congress, California and New York residents shouldn’t get to vote.

She replaced one of the most conservative rep’s by being pro-gun and to the right of many democrats. As a senator she is a chameleon, with one reptilian claw in the air, as everyone can now see. I pray she is voted out next election and replaced by someone not bat shit crazy.

Any states that let CRIMINAL ILLEGALS get Drivers license SHOULD be disallowed voting rights and their votes VOIDED!

“One of the tenants of our democracy…”

Tenets, not tenants. Was this a transcription or a written statement?

The 1st and 2nd Amendments are the law of the land too you freaking hypocrite but that doesnt stop you from trying to disarm law abiding Americans. It clearly says “not to be infringed upon”. You “infringe” on Americans everyday!

We should cal gun grabbers “infringers”!

“All these efforts by President Trump, and other ultra-radical conservative judges and justices to impose their faith on Americans is contrary to our Constitution, and that’s what this is,” Gillibrand said.
———————–
Want to bet on whether she could pass a test on the Constitution?
And since when is abortion a “reproductive right”? Heartbeat, two sets of arms, legs and two DNA’s seem to ruin the “my body my choice” bs.
I’ve also noticed the left is starting to pretend to be against their self fascist interests by trying to call conservatives fascists. Well, **** you democrat fascists.

Slavery was once considered settled law to Senator.

Liberal Progressives are always pushing two things; the desirability of destroying the unborn [abortion] and destroying the elderly and those who simply wish to die [euthanasia]. However, they work overtime to stop the destruction of those convicted of a dangerous, heinous crime [capital punishment]. Killing the innocent harmless and the infirm is not only acceptable but preferred. Killing dangerously violent people, who were convicted of committing heinous, violent crimes is not acceptable to them. Talk about an insane position.

The potent odor of abject desperation.

If you are a person of the Christian faith, one of the tenants of our faith is free will.

I don’t put a lot of weight on Scripture myself, but I seem to recall a prohibition on murder as part of the canon.

Speaking of Scripture, I heard Rabbi Friedman of Minneapolis explain that the reason the Angel told Sara that she would have a child in 1 year rather than 9 months was because it takes time to prepare the soul of the yet to be conceived child. That is a huge blow against the ‘just a bunch of cells’ arguement.

MORONIC IDIOTS should not be Senators, But here is one at a MIC spouting all kinds of TRIPE!

Kirsten and Beto are in an all-out race to be crowned the most shallow of all Democrats – a real accomplishment.

They are the most dangerous of the Democratic candidates because both are absolutely clueless.

I really wish idiot democrats would stop framing abortion as a religious debate. It Is Not. It’s actually quite insulting and troubling to suggest the only way you can oppose abortion is via a religious argument. I know atheists and agnostics who oppose abortion and Christians who are pro-choice. It all boils down to the value of an individual human life.

She talks about free will as though it is consistent with not allowing dissent in her party. SOunds like looney tunes to me!