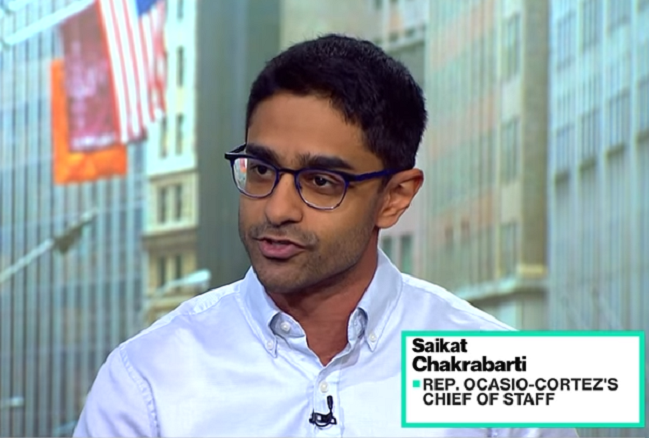 Rep. Alexandria Ocasio-Cortez (D-NY) was plucked from bartending obscurity and launched into the House of Representatives by the Justice Democrats.

One of the group’s co-founders, Saikat Chakrabart, became her chief of staff . . . and proceeded to toss one fire bomb after another among his charge’s new colleagues on the hill.  And now he’s out as of Friday.

Another of Ocasio-Cortez’s top staffers is also leaving her office, but Corbin Trent, her current communications director, is simply moving back over to her reelection campaign.

Saikat Chakrabarti, her chief of staff, and Corbin Trent, her director of communications — who, through their work with Justice Democrats, have been alongside Ocasio-Cortez since her primary run — will leave the lawmaker’s office. Chakrabarti will go to New Consensus, a nonprofit focused on climate issues and promoting the Green New Deal. Trent will direct communications on Ocasio-Cortez’s 2020 campaign, the same role he played during her first congressional run.

. . . . Chakrabarti’s last day is Friday, August 2, and Trent’s transition timeline is still unclear, Ocasio-Cortez told The Intercept. Trent told The Intercept he expects to continue serving as spokesperson through the end of August. Trent, who has been directing communications for the Ocasio-Cortez campaign part time since 2018, will now do so full time. Ariel Eckblad, Ocasio-Cortez’s legislative director, will take over as chief of staff.

Chakrabarti’s tenure with Ocasio-Cortez has been fraught with scandal and numerous unforced errors, including admitting that the Green New Deal is not about climate change at all.

Representative Alexandria Ocasio-Cortez’s chief of staff Saikat Chakrabarti admitted recently that the true motivation behind introducing the Green New Deal is to overhaul the “entire economy.”

Chakrabarti said that addressing climate change was not Ocasio-Cortez’s top priority in proposing the Green New Deal during a meeting with Washington governor Jay Inslee.

“The interesting thing about the Green New Deal, is it wasn’t originally a climate thing at all,” Chakrabarti said to Inslee’s climate director, Sam Ricketts, according to a Washington Post reporter who attended the meeting for a profile published Wednesday.

This plan to destroy our economy was played out in the loony Green New Deal cartoon video that Ocasio-Cortez released earlier this year and that features as Chakrabarti’s pinned tweet as of this writing.

I do everything I do to try to make this future a reality.pic.twitter.com/Yn3IyM6dxZ

Chakrabarti and Trent’s aggressive tactics often made life harder for Ocasio-Cortez in Washington.

Chakrabarti helped spark the rift between Ocasio-Cortez and House Speaker Nancy Pelosi and others when he likened moderate Democrats to “new southern Democrats” in a tweet — in effect calling them racists.

He particularly targeted moderate Rep. Sharice Davids, a Democrat from a formerly red Kansas district who is one of the two Native American women serving in Congress.

Chakrabarti said Davids voted in a way that helped “enable a racist system” when she voted in favor of a bill that would provide southern border relief.

The tweet was deleted but the damage was done.

. . . . Chakrabarti also regularly tweeted criticism of Pelosi, who sat down with Ocasio-Cortez last Friday to clear the air. In a closed-door caucus meeting, the speaker had urged the socially savvy freshman to stop tweeting about other House Dems.

While little is likely to change in Ocasio-Cortez’s own bomb-throwing approach to politics, it’s hard not wonder how much House Speaker Nancy Pelosi (D-CA) had to do with this sudden move.

After a pay-off of some kind by pelosi – and pelosi being bound by these people in some way – this malignant lunatic and his coterie will move onto the next congressional district in an attempt to elect clones of cortez.

We need to take back our schools from the leftists who have poisoned the minds of our young. A guy like Pompeo needs to become Sec of Education.

Here’s who they’re pushing for next election:
https://ballotpedia.org/Justice_Democrats

“We need to take back our schools”

They are not “our schools”. They are a government monopoly bureaucracy.

We need to stop giving them our children.

Gibbie is right. Calling them “public” schools is good marketing for THEM. We should be calling them “government schools” in our ordinary conversation. It’s a total attitude-reversal. Just saying it makes your skin chill.

Thank you, “Close The Fed”!

People complain about the government monopoly “public” schools, but they continue to send their children to them – waiting for “the government” to fix them. This is what I did, and it led to broken hearts.

Stop waiting! “Get Out Now” (the name of a recent book).

We eventually moved our family to a different state with better education options. It took time, money, and effort. It was worth it.

notamemberofanyorganizedpolicital in reply to TheFineReport.com. | August 5, 2019 at 5:30 pm

If you search a bit in news articles about this, you soon find that this is all kabuki theater by Pelosi and her Squid.

Both of Sandy Cortez’s minders are still in her orgs working for and with her.

Social justice anywhere is injustice… Yeah, that would do it.

Bad news for AOC. She just lost her brain.

It seems that a Democratic primary challenge in her district might succeed. She’s never in her district. Many there are unhappy about her scaring off Amazon, and doing nothing for them.

She has a bunch of Republican opponents who have announced, but that’s ridiculous, you have to be a Dem to be elected in that district.

Makes you wonder who is bankrolling the Justice Democrats.

We don’t need to wonder anymore.

He’s a son of his a billionaire

Gonzo – do you have more info on said billionaire?

Funny thing, the anti-wealth campaigner’s being a spoiled rich child bankrolled by a billionaire family gets zero coverage. Even the ‘conservative’ media (mostly clickbait, excepting small sites like this) ignores this as well.

He is probably still pulling her strings.

This announcement is purely for public consumption.

I’m of the opinion there was an unreported follow up showdown off the record between Establishment Democrat heavies and Ocasio and we are seeing the results of it with AOC being strangely quiet and her top two people resigning on the same day.

One could only imagine what was used on Ocasio… a deal that can not be refused?

The lack of party support for her re-election campaign and getting assigned to even more ‘crap committees’ that do all the hard work, but have limited media exposure, can have a startling effect on a politician who has come to like their celebrity status and that cushy seat on the .gov gravy train.

The other a**hole is just going to her re election campaign.
Some (I think she was formerly) pregnant black, female, lawyer sjw is taking over Crapperrabarti place so I doubt you’ll see any good tidings of change from the fascist.

This simply means that this vile, America-hating Marxist scumbag is moving on to his next puppet. It’s his stated strategy to pick off vulnerable moderate Dims and primary them with virulent Marxist idiots.

More and more I begin to think the right is going to need to adopt the prog tactic of active harassment, to force these cretins off the public square.

How much is too much?

The next ‘moderate’ will not be as easy to pick off as Crowley was.
The example of what happened to his by his sitting back and basically ‘phoning in’ his campaign as he had done for so long is THE exemplar of failure.

I can guarantee with near metaphysical certitude that it’s not going to be repeated by any of the rest of the NYFC congressional establishment, or any other demoncrap representative of a ‘safe’ district ever again.

Who is more dangerous: Cenk Uygur or George Soros? This Chakrabarti guy is a catalyst for sure but it’s the people who are behind him that pose the greatest threat. I had no idea these folks – the Justice Democrats – were more than just a bunch of millennial losers.

Cenk is another foreigner, like Nikki Haley, born ELSEWHERE, that’s been forced down our throats. He’s from Turkey.

As far as who’s pulling her strings. I had read there was a money man above Chakrabarti in the organization, but I forget his name

So, did Pelosi have her fill of AOC and lean hard on her in that meeting before the recess? E.g., “We’ll insulate you from campaign finance and residence violations (prosecution) IF you fire your chief and comms people? Otherwise, you’re on your own.”

Next up, Omar and Tliab …

I recall Chakrabarti was in the process of throwing the Justice Democrat new congresswomen under the bus, before Trump brought race back to the table. Chakrabarti was helping Pelosi take back control and bury the JD’s, but Trump was having none of that.

Here again Chakrabarti is throwing AOC under the bus. They’re trying to shed that whole thing and get back to realism.

Interesting video by the way about GND. White Americans are erased!