“Undocumented workers broke our immigration laws, and I believe that they must be held accountable, especially those who may be dangerous.” 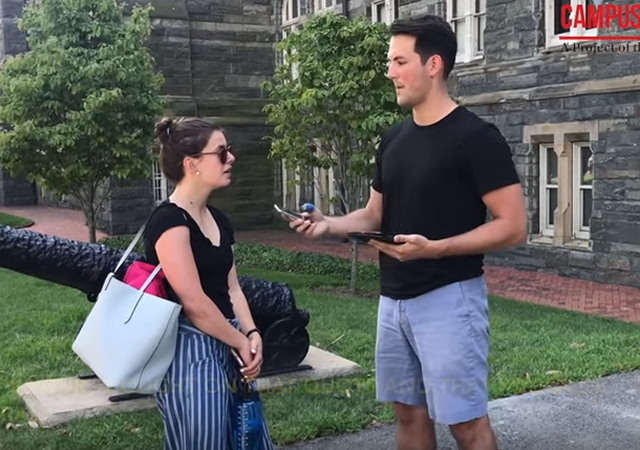 Cabot Phillips of Campus Reform recently visited the campus of Georgetown University where he spoke to several students. He shared a quote about immigration with them which they found repugnant, until they learned the quote was from Obama, not Trump.

President Donald Trump announced that he would use ICE to track down and deport illegal aliens who have been convicted of a crime.

The move prompted outrage from many on the Left who accused the practice of being anti-immigrant and unprecedented.

Proponents of the move pointed out this week that President Barack Obama gave his support to the same policy when he was in office and bragged of deportations of criminals having increased 80 percent during his tenure.

In 2014, Obama gave an immigration address from the White House, in which he said:

We are a nation of laws. Undocumented workers broke our immigration laws, and I believe that they must be held accountable, especially those who may be dangerous. That’s why over the past six years deportations of criminals are up 80 percent, and that’s why we’re going to keep focusing on threats to our security.

Here’s a sample of the reactions:

“I think that policy comes from a place of white American nationalism,” one said, before another added, “Donald Trump has embraced this rhetoric of racism and xenophobia that’s not beneficial to our country at all.”

“I don’t think that quote stands true,” another stated.

Cabot Phillips later appeared on FOX and Friends and said, “I think you could attribute a Mother Teresa quote to Donald Trump and many students would blindly say, ‘well that’s evil, that’s coming from a place of hatred.'”

LOL … that white female with the zebra stripe pants is about as bright as a 1/4-watt light bulb [and I’m being generous about that …].

After learning they are ignorant fools: “But it is the context……..”

gee, it’s almost like the rule is “Anything that Obama says is Not Racist by definition, and anything Trump says IS racist. Even if they say the exact same thing.”

Our colleges are congested with students who should never ever be in a college — and professors who would make Lenin proud.

Totally disagree. I think they should be in college so the other true workers can do their job without interference. Problem is that government funding should be pulled from it so we don’t have a bunch of over paid admin and professors on tax payer dollars. Lets eliminate education welfare.

“Fundamental Transformation if America” in all its glory.

No hope at all for strip pants

Send them all to trade schools.

Are you crazy! No I don’t want these idiots fixing my car, plumbing, building houses or doing electrical work. Are you serious? They are the reason why a ladder has so many safety stickers on them. Maybe as hair dresser, but….

We need a repeat similar to Jimmy Kimmel and Adam Carrola setting up a table at some street fair with a petition to repeal “Woman’s Suffrage.” Possibly one of the most brilliant sketches anywhere.

How Jimmy Kimmel has changed, sadly. He’s now been emasculated & NPC’d, but once upon a time he was actually funny! I wouldn’t have believed it if I hadn’t seen it!

And they want us to pay for their college ‘education’? Think again, snowflakes.

I liked stripe pants girl, after being presented with the fact that Obama had made the comments, said “What’s your question?” She couldn’t think of anything else to say, apparently.

And pink topped girl towards the end: “Well, I don’t know much about Obama’s deportation policies but I imagine he was a lot more humane than the ones going on.” I guess Obama putting children in cages with alfoil blankets washed right over her, and left no impression at all!