Planned Parenthood will be kept comfortable as its future direction is discussed. 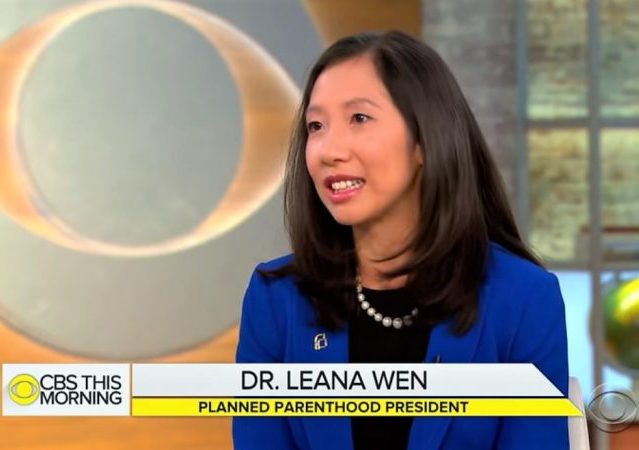 Seems like only yesterday that Dr. Leana Wen was named Planned Parenthood’s new president, and it kind of was. Just under 44 weeks ago, to be precise.

Wen assumed the roll of president on September 12, 2018. Today she tweeted that she had been fired.

I just learned that the @PPFA Board ended my employment at a secret meeting. We were engaged in good faith negotiations about my departure based on philosophical differences over the direction and future of Planned Parenthood. My statement to come shortly.

She later released the following statement:

My statement stepping down as President/CEO of @PPFA and President of @PPAct. pic.twitter.com/WJ3EBgJIAy

A person familiar with the situation told HuffPost that the real issue was that, under Wen, morale was low and “the organization was bleeding staff.”

“This had everything to do with her management style and challenges with her leadership,” the source said, requesting anonymity to speak freely. “Everything from creating a culture of mistrust among staff, having a very insular communication style. Only wanting to talk and communicate with a small number of people she brought in. Not wanting to work with existing experts.”

The source added that Planned Parenthood connected her with a leadership coach to work on her skills, but the board unanimously decided to let her go after the issues could not be resolved.

In February, BuzzFeed reported that two top employees were leaving Planned Parenthood. And staffers were reportedly taken aback by a 182-page handbook that Wen’s team brought to the organization about how to staff the new president. The “Special Assistant Guide” from the Baltimore City Health Department had tips for office demeanor (“Make sure to frequently look up [from Twitter] and make eye contact with Dr. Wen to see if she is trying to communicate urgent information”) and language use (“Dr. Wen ‘learns’ not ‘hears’”).

Wen has said some nutty things during her short tenure.

“Crisis Pregnancy Centers” falsely depict themselves as health centers when their only purpose is to misinform, shame, and deter anyone seeking safe, legal abortion care. https://t.co/Xs4nwHx2bY

A few weeks ago, Wen attempted to attack so-called heart beat legislation in Alabama, Missouri, and Georgia by attempting to link pro-life laws to… cervical cancer and syphilis?

Getting rid of one pro-abortion extremist doesn’t mean the pro-life movement can rest on their laurels.

Students for Life of America President Kristan Hawkins said: “The musical chairs at the top of the nation’s number one abortion vendor will not change the pro-life commitment to confronting them in court, in the legislatures and on the campaign trail. Women don’t need what Planned Parenthood is selling. Pregnancy is not a disease cured by abortion, and with federally qualified health centers standing by to offer true, full-service healthcare, women have lots of options that don’t include abortion.”

“For what shall it profit a man [includes women], if he [or she] shall gain the whole world, and lose his [her] own soul?”

In the case of Abortion Inc. execs? A lot. Of money, anyway.

Apparently she wanted to do what they claim they do, instead of doing what brings in the money.

Give her 2 points for sincerity. Then take away 10 for stupidity.

“A few weeks ago, Wen attempted to attack so-called heart beat legislation in Alabama, Missouri, and Georgia by attempting to link pro-life laws to… cervical cancer and syphilis?”

You mean to pap scans? PP has been making that link for how many years now? It’s not new, and long precedes Wens.

She did not come to full term. Partial birth of a presidency.

How about wearing a black hood and facemask? I hear that’s what the people hot to dodge annoying consequences are doing these days.

“morale was low.” Morale should be low if you’re in the business of killing and parting out babies for profit.

“bleeding staff.” Seriously? With no sense of irony, the Huffpo put this in an article about abortion? I guess the obvious response is that “Maybe the staff shouldn’t have had so many abortions.

How else were they going to afford their Lamborghini?

The “I want a Lamborghini” bust:

44 weeks. Just short of her fourth trimester in office. Post birth. Deemed not viable by her board. Oh, the wicked irony.

When, and by whose choice, does a human life acquire and retain the right to life… employment?

If her presidency was really aborted, she would have been dismembered and her body parts sold for research.

There are two Choices. One, selective-child. Two, cannibalized-child. While the two may coincide, they are generally separable. Not all colorful clumps of cells are viable candidates to be recycled for medical progress.

It’s being reported that a major reason for her firing was her refusal to use ‘trans inclusive’ language, and continuing to say ‘women’ instead of ‘people’.

That’s the status of the current lunacy on the left.

The Board has a forward-looking prospectus for Planned Parenthood to progress profitability through breaching a virtually conceived market for guys with dolls.

Not to mention the lucrative secondary market for used dolls (or used doll parts) after they finish “aborting” it.

The child killing and child molester lobbyists must have joined forces to boot her out.

The story doesn’t make a lot of sense.

“Everything from creating a culture of mistrust among staff, having a very insular communication style. Only wanting to talk and communicate with a small number of people she brought in. Not wanting to work with existing experts.”

Why would the board care about trivial crap like that? The board cares about the money. Something is happening to, most likely, PP’s government revenue stream, and the board doesn’t think she’s the one who will be able to do anything about it. They tried the usual “minority woman president” shtick, and it doesn’t seem to have worked. So they’ll try something else. But first, she has to go.

Given her authoritarian leadership style it seems her departure was not a matter of if she would go, but Wen.

The swamp/left/islamic axis will eat their own, until only one group is left controlling the spoils. But then, they have to get past the likes of us. Hence, the violence, and the likes of antifa.

This is the best headline I have seen in weeks.

Then KK double-downed with this: “Planned Parenthood will be kept comfortable as its future direction is discussed.”

This is Trump-style trolling.

I was wondering if this had anything to wwith the change ..
https://www.breitbart.com/politics/2019/07/13/easy-to-do-abortion-demo-uses-watermelon-at-progressive-netroots-nation/amp/

Everything old is new again

She can join the Four Horse-faces of the Apocalypse.

It might have something to do with losing 60 million of government funding as a result of Trump’s action.

Planned parenthood fights to preserve abortion because it is the biggest profit center for the so called “non – Profit organization”
PP is non profit organization only in terms of its status under 501(c)(3) of the internal revenue code.