Democrats even admitted we may not learn new information from Mueller. 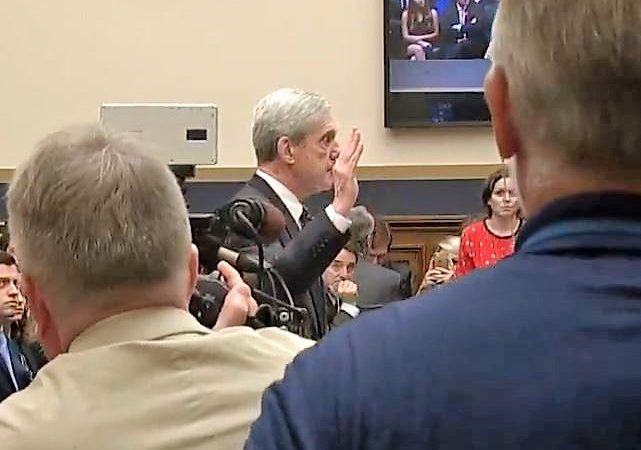 Former Special Counsel Robert Mueller testified in front of the House Judiciary Committee for over three hours this morning mainly over Volume II mainly on obstruction.

Mueller did not provide new answers and told the representatives over 100 to refer to his report.

The Democrats admitted they didn’t expect to hear anything new, but wanted to give the report more attention.

I doubt it worked because Mueller has told Congress over 100 times to refer to his report, he would not speculate, or that he cannot comment due to ongoing investigations.

Mueller said that he did not know about their political beliefs.

The interaction also makes people believe the investigation was staff driven instead of by Mueller. Mueller also said that he did not sit in on many interviews.

Andy McCarthy says the story coming out of this Mueller testimony is that it was a staff driven investigation. I would add those staff were almost to a person highly compromised partisans.

Martha on #FOXNEWS excellent point. This was a STAFF driven investigation. Mueller only did 'very few' interviews out of FIVE HUNDRED. Partisan hacks who hated Trump.

Democratic Rep. Hank Johnson said he does not support to open an impeachment inquiry since he thinks it lacks public support. Democratic Rep. Ted Deutch agreed:

But both men are active participants in the Democratic strategy, which has involved a heavy focus on the summer of 2017, shortly after the first news report surfaced that President Trump was being investigated by Mr. Mueller for possible obstruction of justice.

That article prompted Mr. Trump to call then-White House counsel Don McGahn to “direct him to have the Special Counsel removed,” the Mueller report found.

“You gotta do this. You gotta call Rod,” Mr. Trump said, in a reference to the then deputy attorney general, Rod Rosenstein.

Rep. Jim Sensenbremmer (R) asked Mueller why he did not refer any of his findings to the House for possible impeachment of Trump.

Mueller said it is not his job:

“We have studiously kept in the center of our investigation our mandate. The mandate does not go to other ways of addressing conduct. Our mandate goes to developing the report,” Mr. Mueller said.

As independent counsel, Mr. Starr was operating under a different legal framework than Mr. Mueller, but Mr. Sensenbrenner noted that nothing would have stopped Mr. Mueller from doing the same.

Mueller confirms that no one curtailed, hindered, or stopped his investigation.

Mueller also said that collusion and conspiracy are not essentially synonymous terms.

Rep. Doug Collins (R-GA): "When Mr. Mueller produced his report and AG Barr provided it to every American, we read no American conspired with Russia to interfere in our election, but learned the depths of Russia's malice toward America." https://t.co/EbzpQ0lnrr pic.twitter.com/sQyLqTF1io

Rep. Doug Collins (R-GA): "At any time with the investigation, was your investigation curtailed or stopped or hindered?"
Mueller: "No."
Collins: "Were you or your team provided questions by members of Congress of the majority ahead of the hearing today?"
Mueller: "No.' pic.twitter.com/BLCClGW1Rv

Mueller confirmed to Nadler that his report did not vindicate, exonerate, or exculpate Trump. He also said that the investigators agreed to follow DOJ guidelines that a president cannot be indicted and determined not to make a decision on that.

He also said that he cannot prove Trump didn’t commit a crime.

The second volume of the report detailed episodes of alleged obstruction of justice, but did not reach a conclusion if he committed a crime.

Mueller sworn in. Each member gets 5 minutes to question him.

Mueller said that his team did not investigate collusion because it is not a legal term.

He also reminded the members that he cannot comment on any ongoing investigations. This includes the origins of the probe or the Steele dossier:

Mr. Mueller notes that his team of investigators and prosecutors charged more than 30 defendents with federal crimes, including 12 officers of Russian military. Seven individuals have convicted or pleaded guilty.

Mr. Mueller says he will not be able to answer questions about areas he knows are of public interest, including questions about the opening of the FBI’s Russia ivestigation.

Collins provided his own statement:

Rep. Doug Collins, the ranking Republican on the House Judiciary Committee, says in his opening statement that the president’s attitude toward the Mueller probe was “understandably negative” but says the president “did not shut down the investigation.”

Mr. Collins also said he planned to press Mr. Mueller about the origins of the Mueller probe, which allies of the president say began with an improper reliance on a dossier of salacious and unsubstantiated reports from a former British spy.

He said: “The majority’s dislike of this president and endless hearings into a closed investigation have caused us to accomplish nothing except talk about the problems of our country while our border is on fire and in crisis and everything else is stopped. “

“Responsibility, integrity, and accountability: these are the marks by which we who serve on this Committee will be measured as well,” Mr. Nadler said according to a prepared statement.

After thanking Mr. Mueller for his long career in public service as a combat Marine, Justice Department official and FBI director, Mr. Nadler said: “We will follow your example, Director Mueller. We will act with integrity. We will follow the facts where they lead. We will consider all appropriate remedies. We will make our recommendation to the House when our work concludes.”

Mr. Nadler also highlighted a few incidents in particular from the Mueller report — hinting that the Democrats may make it a focus of the Judiciary Committee hearing.

“Among the most shocking of these incidents, President Trump ordered his White House Counsel to have you fired and then to lie and deny that it ever happened; he ordered his former campaign manager to convince the recused Attorney General to step in and limit your work; and he attempted to prevent witnesses from cooperating with your investigation,” Mr. Nadler said.

“Although Department policy barred you from indicting the President for this conduct, you made clear that he is not exonerated. Any other person who acted this way would have been charged with a crime. And in this nation, not even the President is above the law,” Mr. Nadler said.

Trump tweeted about the hearing this morning: 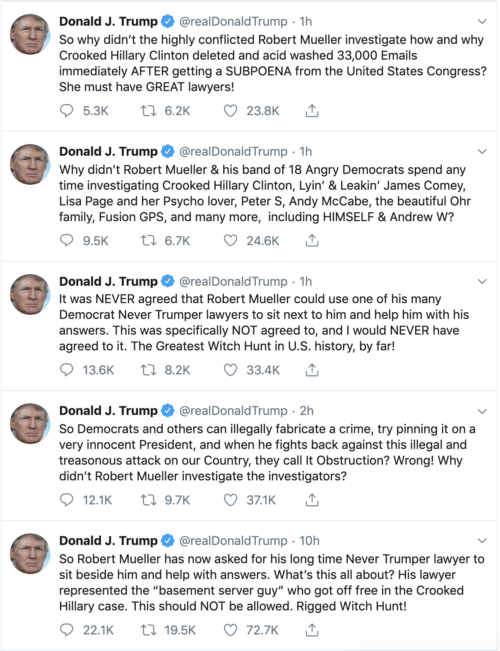 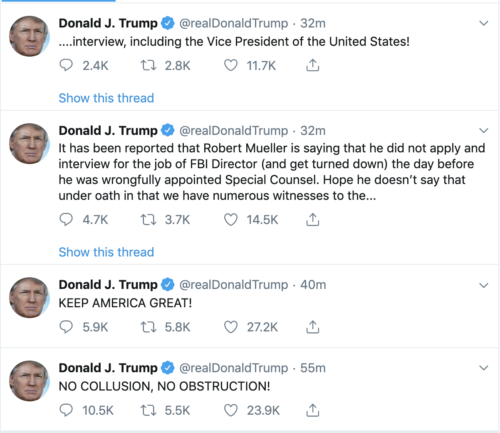 Details About the Hearing

Like I said the hearing will last from 8:30-11:30 in the Rayburn House Office Building.

However, Mueller spokesman Jim Popkin said Mueller will provide a brief opening statement and “not expected to veer from his written conclusions.”

Mueller said in his brief press conference in May that if he testified before Congress he “would not provide information beyond that which is already public.”

Democrats admitted they may not receive new information from Mueller:

“I don’t think he’s going to change the world when he comes in,” said Rep. Karen Bass, who is a member of the Judiciary committee. “But I do think its going to be very important because the Trump administration was so deliberate in dissuading people from the report…hopefully there will be renewed interest in the report after Mueller testified.”

The esoteric deciphering methodologies of the Kabbalah might help them extract hidden meanings from the sacred text. In the best-case scenario the room might even go full Raiders. Maybe Nadler’s face will melt. Looking forward to seeing it on YouTube.

Collusion and conspiracy are synonymous both colloquially in the report but not now with Mueller. Or are they?

“He also said that he cannot prove Trump didn’t commit a crime.”

…and thusly, the justification of the continuing witchhunt is laid out for all to see.

Out here in the real world, however: The abject lack of a prosecutable offense after a competent investigation is defacto proof that a crime has not been committed.

Now we can all see why they hid this guy away and he’s tried to make a hasty exit. Does anyone really believe that this doddering old man was in charge of or led anything at all having to do with this nonsense? He was clearly a figurehead, and doesn’t really appear to even have a working knowledge of the report that was produced under his name. It’s quite cruel of the House Democrats to do this to him, but he agreed to appear, so he gets what he gets. Not a good way to go out. I kind of figured this would be the case from all the breathless recitations of his passed accomplishments we’ve heard over the last couple of years. Sad.

Muller believes he could charge the President with a crime after he is out of office.

Where does this lead?

I like Congresswoman Debbie Lesko (R-AZ). She says to Mueller, something to the effect: It seems to me that the majority of volume two of your report is regurgitation of news media reports that any American with a $50.00 cable TV subscription would have already known.

For fans of “The Leftovers.”