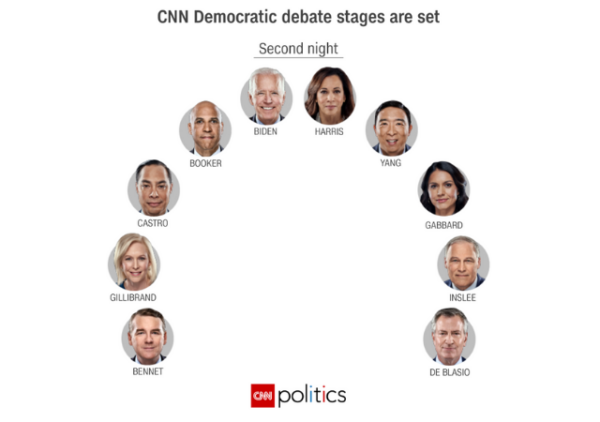 Tonight, the second heat of Democrat presidential contenders squared off in Detroit in a debate hosted by CNN.

This was a live blog. Most recent posts will be up top, just beneath the recorded feed.

Click on the picture to watch the debate at CNN.com

I mean, she’s not wrong

Who is this Bennet character talking sensical talk on the debate stage, doesn’t he know where he is?

Michael Bennet: "This is the fourth debate that we have had and the second time that we have been debating what people did 50 years ago with busing — when our schools are as segregated today as they were 50 years ago" #DemDebate pic.twitter.com/w01eOG38VE

Gillibrand: "I can talk to those white women in the suburbs that voted for Trump and explain to them … that when their son is walking down a street with a bag of M&M's in his pocket wearing a hoodie … his whiteness is what protects him from not being shot" #DemDebate pic.twitter.com/Udg9izUcQx

The pretend debate on immigration

Biden was the only candidate with the stones to talk about illegal border crossing as being… (gasp!) a crime! Naturally, the crowd didn’t respond.

Biden: Immigrants should have to wait in line.

It’s amazing that such a logical statement is fundamentally rejected in today’s Democratic party, which welcomes illegal border crossings.

Reminder- the candidate with the closest immigration position to the median voter is Biden.

Only 35% of adults and just 49% of self-identified Democrats support “decriminalizing” the border. https://t.co/y0XE9HKsav

Are we going to talk about *why* health insurance premiums and deductibles have skyrocketed or just skip over that part? #DemDebate

Harris responds to Biden’s criticisms: “Unfortunately, Vice President Biden, you’re just simply inaccurate in what you’re describing. The reality is that our plan will bring healthcare to all Americans under a Medicare for All system” #DemDebate pic.twitter.com/YNPTiUh7Pu

Joe Biden criticizes Kamala Harris’ health care plan: “This is the single most important issue facing the public. And to be very blunt and to be very straightforward, you can’t beat President Trump with double talk on this plan” #DemDebate pic.twitter.com/IVgkuia3Zn

This is the problem. These candidates keep pretending Americans hate their health insurance to justify plans that will take away that insurance. That just doesn’t match reality. #DemDebate https://t.co/37tvwNJjxZ

This is what people who actually know math would say. Profits aren’t the issue. Prices are. And the most egregious and impactful prices in health care belong to “non-profit” hospitals. https://t.co/xBhEH9OClG

Anyone else having a hard time getting that classic circus tune…played on a calliope…out of their heads when looking at that rogues gallery….

It certainly won’t be as interesting without Marianne.

Quick, follow my practice and open up this site to get your nightly dose of Marianne’s wisdom,

Gads. What a lineup!

For caseoftheblues: Entrance of the Gladiators.

Well, my band wasn’t at the brew hut last night, but over the weekend they won the best new band contest at the RockyGrass Festival outside of Boulder and that means that the days of seeing them for free (I usually drop a tenner in Philip D. Bucket on the way out) in a small 50-60 seat bar are over 🙁

And when dad stops by it really rocks.

My TV doesn’t like the channel, keeps asking “are you sure?”.

Fireworks already, Biden going after Harris on healthcare plan. Harris on the defensive.

Can’t wait for the next topic…

Finish the sentence: When a vintage ‘Wham’ video is more appealing than your CNN prime time line-up…

Did y’all notice? When responding to Mr. Bennett, Mrs Harris’s enunciation of “Medicare for All” degenerated into “Medicare Fr’all”, a Freudian snip so damn close to “Medicare Fraud.”

Stay calm, my ears are long of tooth.

So much is optics, unfortunately. In the end an effective bumbler is preferred to a smooth incompetent.

It’s good to see the gloves off. Booker is the most fake.

The mask slips. The Eric Garner case is over. The courts have spoken. Each Democrat candidate is more than happy to drag the officers back into legal jeopardy and sentence them the way *they* want regardless.

So it doesn’t matter what the courts rule. The mob rules, and they plan on leading said mob to destroy whoever they want.

None of them volunteer to arrest 370 pound criminals with 30 priors and small-time Mafia ties. You can’t sell bootleg ciggies in NYC for long without permission from the nearest LCN branch. EG had been doing it for several years. He also had full disability payments from his previous job, a side benny for being morbidly obese. He was not about to, uh, starve.

This is . . . the second time that we have been debating what people did 50 years ago with busing — when our schools are as segregated today as they were 50 years ago

The word for this statement isn’t “sensical”; it’s “bullshit”.

The debate stage schematic with the candidates’ faces looks like a dental impression!

The National Association of Dumb Blondes sent Gillibrand a box of black hair color because they’re tired of her making them look bad.