“I’m not sure. … The details might not have all matched, but that’s what I remember” 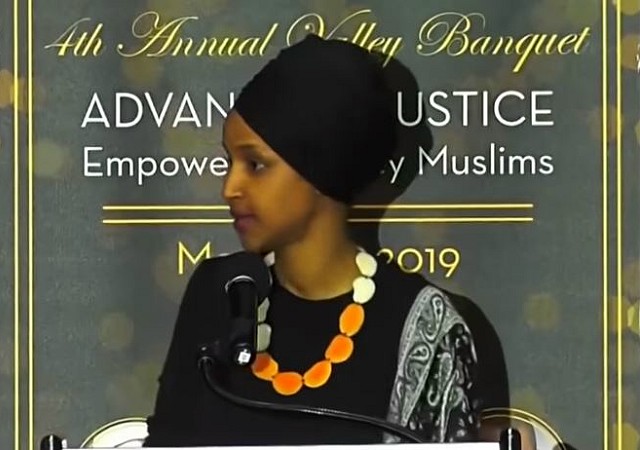 Rep. Ilhan Omar (D-MN) told students at a high school in Minneapolis a tragic story of an African-American woman sentenced to jail time for stealing a loaf of bread to feed her starving granddaughter.

Now she is admitting she may have fabricated some details.

Rep. Ilhan Omar confessed to falsifying a story she shared in front of about 400 students at Richfield High School in Minneapolis.

The anecdote was from Omar’s days of working for a Minneapolis city councilman five years ago.

She described a “sweet, old … African American lady” who got arrested for stealing a $2 loaf of bread to feed her starving 5-year-old granddaughter and spent the weekend in jail.

After the congresswoman’s speech, for which she was 30 minutes late and cost the students their lunch period, the Washington Post investigated the claim.

“I’m not sure. … The details might not have all matched, but that’s what I remember,” the Minnesota Democrat said in an interview. “She might have had a prior [arrest].”

Even the Washington Post story, which is mostly a glowing profile, threw a skeptical eye on her account:

Omar’s story echoed the plot of “Les Miserables.” If true, it is also probably embellished. City officials said that police aren’t allowed to arrest people for shoplifting unless there’s a likelihood of violence or further crime. Typically, shoplifters are sentenced to attend a three-hour class.

Twitchy has collected some responses to the Free Beacon report on this:

Is this an example of being morally right is more important than being factually correct? Freakin’ dingbat.

When you “fudge the facts”, ma’am, you get caught. Please, earn your media the honest way. That’s why in politics the press attention is called “earned media”.

There is a trend in our society where people just make things up to get their point across, or to seem relevant or morally superior. This is bad for society. It is what some people are calling “post-truth” and our elected leaders should not be leading this way.

Ilhan Omar could so quickly tell an amazing pro-American story based on her experience of coming here as a refugee and eventually winning a seat in Congress. Instead, she seems hostile to America, despite everything it has done for her.

That must have been a mighty fine loaf of bread.

The political art of Bread and Circuses is still alive after a couple of centuries.

She and millions of others like her that hate the country that has saved and helped them and respond only with hate and derision and a desire to destroy us are a big part of why more and more people are just getting fed up with immigration in general.

Omar’s legacy will be all lies and deceit.

There is already corruption.

“Omar’s legacy will be all lies and deceit,” following the example of her prophet, Big Mo himself.

Do you know that Big Mo is considered, by Muslims, to be the Perfect Man? Meaning that if you as a Muslim perform any act that he did, then you are truly Islamic?

But when his behavior as the Perfect Man is listed, Muslims seem to get even angrier than usual,

The solution to Big Mo is to use the other Big Mo [which currently remains retired in Pearl Harbor].

Racial injustice is where the idea goes when blacks don’t do as well as whites after decades of affirmative action, if the alternative idea is unacceptable.

Remember that American blacks average IQ is 85, AOC is from Somalia which has an average IQ of 68.

I firmly believe that is why affirmative action has failed, in that the small percentage of blacks who are at an average IQ of 100 or higher are succeeding, and the rest simply cannot hack it.

Rather than accept this, society has systematically dumbed down college curriculum in order to create the impression and to collect big government bucks, that affirmative action works. Many people simply cannot accept that as technology advances that a ever higher percentage of the population will not be smart enough to compete for available jobs.

Affirmative action is focused on that “talented tenth” (WEB Du Bois’ term) the ones who get preferential college admissions and preferential hiring thereafter.

The lower 90% get nothing as far as I can tell. There’s no affirmative action for getting a job at McDonalds or the local carwash. Never heard of it, even though I suppose legally it’s just as consistent with the law. An ordinary black man with an 80 IQ, or 90 that got into college but could not graduate, gets no advantages.

We’d like to lift all boats. But in terms of fairness, the place where affirmative action has created distortions is in the upper middle class.

The public policy response ought to be to teach good character rather than resentment. Good character gets you further in life than IQ. You’re just part of the spread then and fitting in.

Identify as American, not as black.

“To put this in perspective, Ashkenazi Jews are one standard deviation smarter than Caucasians…”

Once again, prove it. Dig up the facts and find that this is nothing more than a falsehood.

“Remember that American blacks average IQ is 85, AOC is from Somalia which has an average IQ of 68.”

Even if this is true, it tells us precisely NOTHING about Ilhan Omar. She could very easily have an IQ above 120. Group differences may be interesting and have relevance for social policy, but they tell us nothing about the individual. Judging people whom we know as individuals by their class, race, or “privilege” group is objectionable and reprehensible whether done by “them” or “us.”

So unless you have information about the actual IQs of individuals being discussed in an article, do us all a favor and stop repeatedly posting this irrelevance.

There’s not much doubt about group averages of IQ varying widely
https://brainstats.com/average-iq-by-country.html
and you’re not going to see extreme IQs in the unfavored direction because the normal distribution falls off so quickly, though there’s a good overlap in the middle regions.

The trouble is that an IQ-unfavored group is easy pickings for activists – you’re being discriminated against and that’s why the other guys have nice jobs and you don’t – not because they’re dumb but because they’re people. Where similar IQ white people would not be vulnerable to that activist because he’s not marked by skin color so he’d just fall where he falls in the talent mass.

That’s a big public policy problem. I suggest teaching good character, which is what gets you a good place in life, overwhelming IQ in its effects. Not good for activists, though.

Who’s going to hold her accountable? She can pretty well say anything thing she wants and because of her intersectionality no one calling her out.

It’s Congress, and she represents a Somali Muslim district. Her seat is safe unless some other Somali runs against her.

I believe she also recalled that the name of the arresting officer was Police Inspector Javert. And grandma’s name was Val Jean.

Oh yay! Now tell the one about the asylum-system-grifter who married her brother in a polygamous marriage, cheated on her taxes and got elected to public office when she wasn’t even eligible to run!

She’s Muslim, of course she’s hostile to America. It’s what Muhammad would demand, since infidel rule must be overthrown.

Her district is Somali Muslim. I remember that neighborhood when they were newer in the country and not militant. They were out of place then but somewhat pitied. Now, she saw a chance to overthrow the white female Democrat who had represented the district for a long time, since the Somali population had exceeded 50%.

This isn’t a racial thing.
Joe Biden used to tell other peoples stories and claim them for himself.
Now it’s become OK so he’s clear to run for the democratic nomination.
I think he’s still a white guy although he may now identify as something else.

Victor Hugo and Jean Valjean were unavailable for comment.

I also thought it sounded a little like she watched Les Misérables over the weekend and got her stories merged.

The facts are not important. It’s the story. Just ask Spartacus.

In this case the story is as always, “Orange Man Bad”.

FACTS are just tools the patriarchy uses to oppress women and POC. Whether the facts are true or not is unimportant. Whet is important is whether the story seems to be true.

And I bet she spent 3 years in solitary confinement, in a dark and damp cell, never seeing the sun or fresh air.

She has been watching too many Kevin Bacon movies

WHY ISN’T SHE IN PRISON YET FOR IMMIGRATION FRAUD.

This isn’t really news. She lies all the time.
Wake me up when you find her telling a verified truth. Now that will be a first.

That’s OK. It was Fake but Accurate!
(I can’t believe I’m the first to say that!)

Rep. @Ilhan Omar …. is ironic given her 2016 letter to a judge asking him to go easy on an ISIS terrorist.