What was really appalling was her snide response and the national media’s indifference to a sitting U.S. Congresswoman dictating the terms of what issues she will and will not discuss. 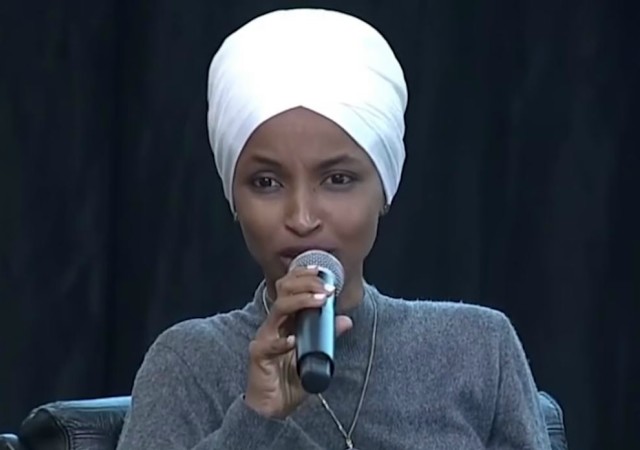 On Tuesday, Rep. Ilhan Omar (D-MN) spoke at the Muslim Caucus Education Collective 2019 Conference in Washington, D.C. about a wide variety of issues relevant to the Muslim community.

During the question and answer part of the conference, Ani Zonneveld, who is the founder of Muslims for Progressive Values, asked Omar about the issue of female genital mutilation. Omar found the question, “appalling.”

Here’s how the exchange went down:

Prior to asking Omar for a statement [against FGM], Zonneveld referenced the case of Dr. Jumana Nagarwala, who was charged in federal court in connection to performing genital mutilation on nine girls in the Upper Midwest, some of which were from Minnesota. The FGM charges were dismissed because the judge ruled that the federal law banning FGM was unconstitutional.

Omar called the activist’s question “appalling,” saying that she’s supported bills against FGM while in the Minnesota Legislature and in Congress, in addition to giving statements about the issue in the past. She said that such questions and calls for comment carry with them the accusation that she and other Muslim lawmakers somehow support FGM.

As part of her response to Zonneveld, Omar joked that she should perhaps make a schedule so she doesn’t forget to condemn FGM, al-Qaida or Hamas on a daily basis. “Does this need to be on repeat every 5 minutes,” she said, adding: “It is a very frustrating question…you can look at my record. I’ve voted for four bills doing what you’re asking me to do.”

The audience responded to the freshman congresswoman’s answer with wild applause and some finger snaps, with a few visibly jumping out of their chairs in excitement.

Omar then turned her attention to Zonneveld. She demanded that the next time an audience (or, presumably, a journalist) ask her or Rep. Rashida Tlaib (R-MI) a question that they ask “the proper questions” they would give non-Muslim lawmakers. They do not want questions specific to the Muslim community because such questions offend her:

I am, I think, quite disgusted, really to be honest, that as Muslim legislators we are constantly being asked to waste our time speaking to issues that other people are not asked to speak to because the assumption exists that we somehow support and are for…Right? There is an assumption. So I want to make sure that the next time someone is in an audience and is looking at me and Rashida and Abdul [El-Sayed] and Sam [Rasoul], that they ask us the proper questions that they will probably ask any member of Congress or any legislator or any politician.

I’ll put in perspective the absurdity of Omar’s response.

This was a Muslim conference where they discussed issues that impact the Muslim community. Most of the audience and all of the panel were Muslims. Someone asked about FGM as it related to a specific case involving the FGM allegedly done to nine young girls, including some from Omar’s home state of Minnesota, by a Muslim doctor.

If someone cannot ask this “appalling” question by a Muslim activist to a Muslim Congresswoman, then where can someone ask about it?

Zonneveld only asked for a simple statement condemning FGM from Omar and Tlaib (who did not attend the conference), because she believed it would send a powerful message of support victims of FGM. There was not a hint of even the slightest insinuation in her question that she thought Omar was in favor of FGM.

Omar suggested her past actions on FGM should have been enough of a statement of their own. She then complained that she and Tlaib shouldn’t be repeatedly asked these questions because non-Muslim lawmakers do not get questioned about FGM. Seriously?

Her rationale for being outraged over being asked the FGM question doesn’t hold water.

If you believe your past body of work should speak for you instead of answering a question, then maybe you shouldn’t hold public office.

Secondly, conservative lawmakers receive a lot of questions if they support or condemn controversial practices like gay conversion therapy and right-wing/Christian extremist acts. They are also asked how they as Christians could support Trump, how they can call themselves Christians and be against Obamacare, etc. etc.

Why should it be any different for Muslim lawmakers to be asked and to have to answer similar questions – especially when those questions come from other Muslims?

Christian conservatives certainly don’t get any special treatment from activists and the mainstream media on any questions. Muslim progressives like Omar and Tlaib shouldn’t be treated with kid gloves, either. If they’re the tough as nails women they paint themselves out to be, Omar and Tlaib should be able to answer these types of questions no matter how often they are asked instead of running for the fainting couches or tiresomely playing the “progressive woman of color“/incitement cards.

I want to add some context to what Omar was asked to emphasize to you just how despicable her treatment of Zonneveld was, and how harmful her answer was to victims of FGM. Maryum Saifee, a Muslim woman who was a victim of FGM, spoke out on Facebook in defense of Zonneveld’s question, and blasted Omar (bolded emphasis added):

1- The federal law on FGM was recently overturned in Detroit. Nine girls were transported from #Minnesota and #Illinois to #Michigan. This isn’t about singling out a Muslim-American representative — it’s about singling out a representative from a state whose constituents (seven year old girls) were brutally cut and have to deal with a highly likely scenario where they will not see justice. This isn’t about identity politics. It’s about standing up for your constituents. Please don’t call yourself an unapologetic social justice warrior when your outrage is selective. You are being asked to weigh in *because* these girls are *your* constituents. So yes, that’s what representatives are supposed to do — they are supposed to advocate and represent their constituents.

To make matters worse, check out below how Ani Zonneveld was characterized by the very few mainstream media outlets that did the bare minimum reporting on this story.

The Hill’s report referred to Zonneveld as an “audience member.” The newspaper did not mention her name in the story, nor was the fact that she is a Muslim human rights activist.

CNN and the Guardian did similarly on YouTube (see below) and their respective websites, which only posted videos of the exchange along with a paragraph describing the incident. They didn’t describe Zonneveld as a progressive Muslim human rights activist; they described her merely as a random “audience member.” Someone seeing the term “audience member” might think “oh it was probably some right-wing nut job gotcha question” from a conservative new media website rather than someone like Zonneveld who has skin in the game.

Now This, a progressive website founded by former senior HuffPo alums, cheered Omar’s “shut down” of a “biased” FGM question from a “moderator:” 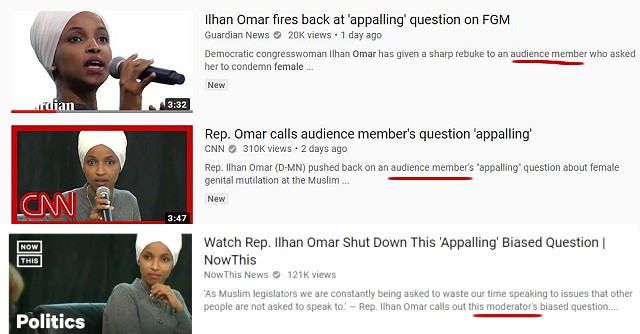 So to Now This, everyone should applaud Omar for “shutting down,” diminishing and belittling the voice of a Muslim advocate for FGM victims. People should approve of Omar telling Zonneveld it was a “waste of time” for her to be asked for a statement of support for alleged victims of FGM. Some of the victims reside in her district.

And to think people thought Omar wanted to go to Washington, D.C to elevate and amplify marginalized Muslim voices.

Let’s talk about what’s “appalling” here. It wasn’t the question. It was Omar’s snide response and the mainstream media’s disgraceful indifference to a sitting U.S. Congresswoman dictating the terms of what issues she will and will not discuss.

The mainstream media’s continued coddling, white-knighting, and selective reporting of Rep. Ilhan Omar in place of engaging in actual journalism will only encourage her to impose further even stricter rules about what types of questions she finds “proper.”

Related: ExMuslims.org executive director and Pakistani-American Sarah Haider made similar points in a Twitter thread about Omar’s answer. Make sure to check it out.

Her Islamic supremacism comes through, loud and clear, to the point that she acts as if she were a queen – complete with Nefertiti-esque crowns in the form of her ever-changing head coverings – deigning to take questions from her subjects, instead of being one of 435 representatives.

She objects to being asked about “radical”(*) Muslim groups. These questions will continue since her Muslim co-religionists will continue to follow their Qur’an – the same Qur’an which Omar reads and follows – and the instructions in it to kill the non-Muslim until the whole world worships their Allah.

In fact, now that we know that this irritates her, more questions about Islam should be directed at her. Lets see her become really unglued, revealing the Muslim beneath.

LOL … your mention of Nefertiti reminds me of the old Steve Martin skits on SNL.

King Tut!
Got a condo made of stona!

We know what the socialists plan for our future.

And we know what the Muslims plan for our future.

Like Adolf in Mein Kampf, they make it clear enough.

She doesn’t like the question because she supports it, female genital mutilation, even if she has said something or voted differently in the past. The past were just the lies to appear to be moderate rather than extreme muslim.

my only question to her would be along the lines of ” On your deportation flight, would you prefer to ride with the baggage or strapped to the wing? “

With the way you’re behaving, I’m not surprised that even your brother divorced you.

We can replace her

We have to get her and AOC out

They are our best chances

For goodness sakes you let barbaric anti Americans in make them paper Americans and are surprised they don’t share your values?

We’re a proposition nation? Maybe we could actually select people who share the proposition? Evict those who don’t?

“If someone cannot ask this “appalling” question by a Muslim activist to a Muslim Congresswoman, then where can someone ask about it?”

Nowhere, exactly as Omar wants it.