Florida Principal Reassigned After Refusing to Say ‘Holocaust is a Factual, Historical Event’

Florida Principal Reassigned After Refusing to Say ‘Holocaust is a Factual, Historical Event’

Then he blamed parents. 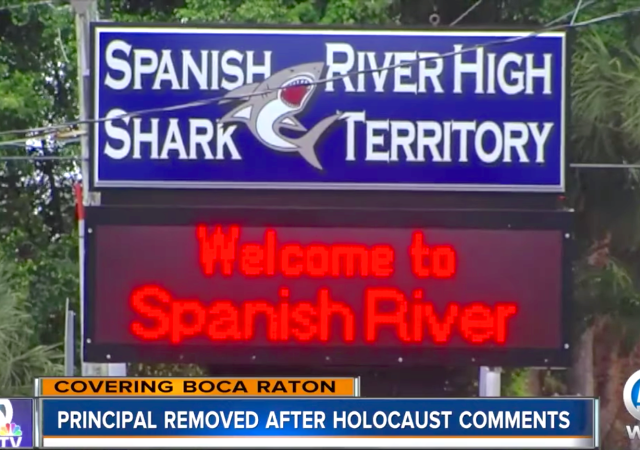 The letter caused outrage, which led the school to reassign Latson to a district position. Instead of taking responsibility, Latson placed the blame on the parent who complained about him.

The email exchange between Latson and the mother, who asked publications not to identify her, took place in April 2018. The school district explained they “privately admonished” Latson after the mother complained, but believed “his actions did not merit disciplinary action or a formal reprimand.”

Since the publication of the emails earlier this week, the story caught international attention and an online petition calling for Latson’s firing gained thousands of signatures.

Thinking Latson simply had expressed himself poorly, she wrote back, asking him to clarify his comments. “The Holocaust is a factual, historical event,” she wrote. “It is not a right or a belief.”

She expected a chastened response. Instead, the veteran principal doubled down.

“Not everyone believes the Holocaust happened,” he wrote, according to email records obtained by The Palm Beach Post through a public records request. “And you have your thoughts, but we are a public school and not all of our parents have the same beliefs.”

He went on to say that as an educator he had “the role to be politically neutral but support all groups in the school.”

“I can’t say the Holocaust is a factual, historical event because I am not in a position to do so as a school district employee,” Latson wrote.

The mother forwarded the email to the school district

Latson told The Palm Beach Post “that he regretted his comments.” He also insisted that his words “did not accurately reflect my professional and personal commitment to educating all students about the atrocities of the Holocaust.”

Latson has caused more controversy by blaming the parent in his outgoing letter:

Principal Willlam Latson’s false claim about the reason for his removal came in a farewell message he sent to his school staff Monday, hours after being reassigned amid a national outcry over his written remarks last year to the parent.

“I have been reassigned to the district office due to a statement that was not accurately relayed to the newspaper by one of our parents,” Latson wrote in the message, a copy of which was obtained by The Palm Beach Post. “It is unfortunate that someone can make a false statement and do so anonymously and it holds credibility but that is the world we live in.”

Contrary to his claim, Latson was not removed from the school because of a parent’s statements but as a result of outcry over his written comments to a parent last year in emails.

Here are the emails.

One thing I noticed quickly in the emails (haven’t read most of them yet) is that Latson doesn’t use correct basic English grammar. That makes me wonder about him in additional ways. I hope the new principal will have a better command him- or herself of the skills that students coming into the high school should know.

I noticed that too. I found thee clear grammatical/spelling errors and many clumsy sentence structures. What ARE they teaching at Spanish River High?

I allow some latitude in judging a person’s writing skills when reading emails. I tend to be sloppy too when writing an email. However, I was immediately struck by Latson’s poor writing. Some of his sentences were barely comprehensible.

I don’t know if he is Holocaust denier or simply from the belief that all truth is subjective.

He is another affirmative graduate and degree. This is a huge problem for business, where they can no longer trust that a degree was actually earned.

And now I noticed my grammatical hiccups in my post. Double sigh.

“Not everyone believes Slavery happened,” he wrote, according to email records obtained (…) “not all of our parents have the same beliefs.”

(…) as an educator he has “the role to be politically neutral but support all groups in the school.”

“I can’t say Slavery is a factual, historical event because I am not in a position to do so ….

There are plenty of people who do not understand how common slavery was throughout history, and they do not understand that slavery is still quite common in Africa, or that American slaves were for the most part enslaved and sold by their fellows.

It is also interesting that the only group, whose ancestors were slaves about eight generations ago, demanding handouts.

Slavery was invented in the Sub-Sahara about 200,000 years ago.

I suspect he thought he was being politically correct where everything is relative to an individuals perceptions and there are no truths.

Problem for him is that he’s part of an educational institution. Facts do matter there even if there’s an inclination to be open to differing opinions.

I think this guy is just stupid and picked the wrong time to be “inclusive”.

I think I’m ready for the Sweet Meteor of Death to come. We had a good run.

Fair enough. I can fight back until the sweet, sweet release of the SMOD.

They don’t teach the constitution, the Revolutionary war, they say the Pilgrims gave thanks to the Indian on Thanksgiving, they don’t cover WW1 and the Treaty of Versailles or even the war between the states.

But Slavery bad. Spend days on Harriet Taubman, Sojouner Truth, and Frederick Douglas, and the evil KKK and slave owners like Washington and Jefferson!

I guarantee they don’t and will never mention the genocide of the Armenians by the Turks or the Holodomor (Will Duranty gets to keep his Pulitzer for the egg breaking omelet denial).

Perhaps they can do some LGBTQ pride day and mention how many Gays and Disabled were killed in Hitler’s death camps and how wrong that was and menton the rest in a footnote to be consistent with he revisionism and low quality.

Do you really want the Holocaust taught when the narrative frames everything as privileged v.s. victims intersectionality? How well are blacks doing v.s. Jews – and measure their Privilege quotient.

I know – Germans are white so are bad, as are Poles, and even Americans like my Father who was combat wounded fighting in WW2 against the Nazis, as is Corrie Ten Boom – most were Christians, maybe Judaeo-! That is what they would learn today.

Or we can go back to what homeschoolers currently teach.

Over the last several years I have substitute taught in several suburban Detroit districts, ranging from sub-mediocre to about as good as you’ll find these days.

One middle school US history textbook was typical–nearly two pages on Harriet Tubman and two paragraphs on Thomas Jefferson, one of which was about how he owned slaves.

High school US history textbook–lots of coverage of the Japanese relocation and the changing role of women and blacks, and a couple of pages on the actual course of the war. Students who read the textbook–I don’t know what, if any, supplemental materials they received–would know about segregation in the armed forces but would never have a clue about the Battle of Midway.

“Reassigned?” What kind of crap is that??

Maybe it has something to do with Gender, maybe surgery. After all, in today’s high school you can identify as whatever and force your parents to give you steroids and surgery.

So, if you identify as an anti-semite you can’t be fired?

She should have been fired.

You can bet he’s been kicked upstairs.

The principal took an ideological and political stance, deciding not to teach the historical fact of NAZI genocide. There are any number of reasons why that may be justified. After all, not every historical event is taught regularly. But, he decides to argue that the historically verified information will not be taught because “some people” refuse to believe that it took place. And, as he refuses to acknowledge that his actions were directly responsible for his reassignment, he is obviously not cut out to be an administrator.

It really is impossible to actually fire a government employee.

The Florida Sun-Sentinel is reporting that the superintendent will recommend to the school board that this guy’s contract not be renewed, essentially he’s being fired.

There’s another way to interpret the principal’s comments and I’d love to know if that is what motivated his statement.

It can be read as stating that irrespective of his own personal beliefs and knowledge, some people are offended by the statement that the Holocaust happened as the historical record lays it out. Those people have their own truths.

If this is the case I’d be curious to know just who is offended by the truth about the Holocaust. My guess is that it’s Ba’hais.

I’m sorry. But of all the religions you could have picked, why would you pick the Baha’i faith?

This is the inevitable result of PC and moral relatavism. Expect more of it.

A bunch of Jew-hating m-fers.