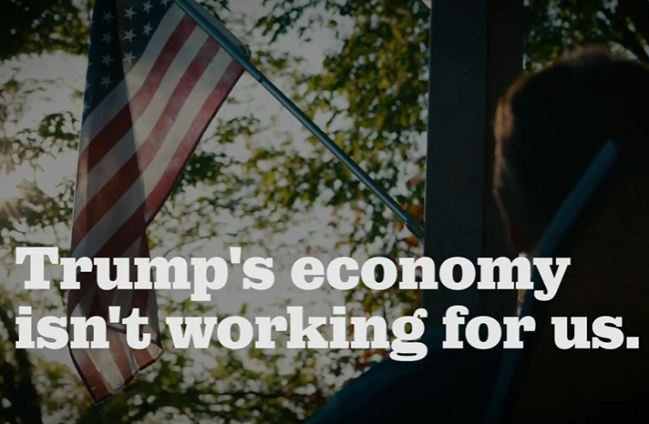 It doesn’t get much more seedy and cynical than this.  The Democrat Super PAC Priorities USA is pouring millions into key battleground states to create political ads that look and sound like local news.

The goal is to convince voters in the selected states—Michigan, Pennsylvania, Florida, and Wisconsin—that the Trump economy is not working for them.  By cleverly focusing on the economy and avoiding the “politics of the aggrieved,” the PAC hopes to make headway in Trump country.

Hoping to sway voters in these key states, Priorities USA is focusing not on issues that drive national Democrats but on the economy.  Apparently, the hope is to convince voters that what they can see and what they know from experience is untrue.  Who are you going to believe?  Priorities USA or your lying eyes?

Get ready for local news — brought to you by the Democrats.

One of the party’s largest Super PACs is finally pulling the trigger on a $100 million plan to help boot Trump from office. But much of the media it’s pumping out won’t look like traditional advertising.

Rather, Priorities USA is planning to flood swing states — many of which have lost their local papers — with stories favorable to the Democratic agenda. Four “news” outlets staffed by Democratic operatives will publish state-specific information across social media in Michigan, Pennsylvania, Florida, and Wisconsin. They’ll also boost content by independent sources.

The idea is to convince voters that Trump’s economy isn’t working for them.

“This should be covered by local news, but local news is dying,” Priorities USA Communication Director Josh Schwerin told VICE News. “Our hope is that we can help fill that hole a bit with paid media while also making it easier for the remaining local outlets to report by providing local angles on national policies with specific facts and people to tell their stories.”

The plan is as devious and dastardly as it is clever, though it should be noted that the “local news” pushed by the PAC will be designated as advertisement in some way that meets legal requirements (but that may not be obvious to viewers who think they are seeing local “news”).

The super PAC will put media staffers on the ground for the first time this cycle. Two-person teams in four key battleground states will “collect and capture stories from real people” in part to produce “original content for social platforms.”

Schwerin disputed that Priorities’ state-specific social accounts are news outlets, adding that any content the group puts money behind will be labeled as an ad. But the upshot of their efforts sound an awful lot like a newsgathering operation in states that happen to have fast-shrinking local media.

Michigan’s population centers of Detroit, Ann Arbor, and Grand Rapids no longer have daily newspapers. In Pennsylvania, the Pittsburgh Post-Gazette just slashed its delivery schedule to three times a week.

Taken together, Priorities staffers say, it means less coverage of how the trade war with China or skyrocketing health care costs affect individual voters. And the group’s messaging for the next 16 months will revolve around such stories rather than criticisms of Trump himself.

By avoiding direct attacks on the president in “Trump country” and by posing as local news, Priorities USA hopes to undermine the president’s 2020 reelection efforts.

“Most of the conversation has been on Mueller, on collusion, over the last week on race, and comments the president has made on four Democratic [House] members,” Guy Cecil, chairman of Priorities USA, said on Tuesday morning. “But it’s not a lot about the economy — and the point we’ve made is that Americans are experiencing Donald Trump’s economy in a way that is fundamentally different from the headlines.”

Priorities USA will also push its message in three parts: it will share news stories online, advertise in search results and push testimonial videos of people talking about their struggles.

“I paid into Medicare my whole life. Trump wants to cut it just to pay for tax breaks for billionaires,” a man says in one ad that will run online as part of the campaign, which will cost Priorities between $250,000 and $450,000 each week.

Uniting under a central message is a key part of the super PAC’s 2020 strategy, Cecil said.

. . . . “Part of the reason why we are in this mess is because we have micro-targeted our way into creating a coalition of the aggrieved, where each person has their own issue,” Cecil said. Democrats need “a message that is consistent and compelling and can reach people.”

Interestingly, the ad described above has been found “mostly false” by none other than PolitiFact, a site often noted for its anti-Trump, pro-progressive bias.

Any large-scale tax cuts reduces revenue and can require cuts elsewhere in the federal budget, where Medicare is a high-cost piece.

But the ad over-reaches in directly linking tax cuts signed into law almost two years ago and Medicare changes that are still in the works.

Referring to the tax cuts simply as “to billionaires” is a stretch as well. The cuts do disproportionately benefit the wealthy, but a very small portion of the money actually goes to billionaires.

We rate this claim Mostly False.

Times must really be tough for the media if they’re gonna start making Democrats _pay_ for their slanted news coverage now.

A buck is a buck.

Australia: Muslim student goes crazy because she does not like man’s shirt. Snowflakes side with crazy lady. Totally intimidated by Muslims. Make the most noise, implicitly threaten violence, and the liberals collapse.
https://redrightvideos.com/muslim-woman-totally-flips-out-verbally-attacks-man-for-shirt-hes-wearing/

Golfing with a couple friends Wednesday. One of them was telling us about a family funeral on his wife’s side.
Said most of her family is Michigan UAW, hard core unionists.
He was reluctant to say anything political. Turns out her family had a lot to say, and it was all dems are bad and they suck and we’re voting for Trump in 2020.

So even more Fake News is coming?

Not to suggest the double-negative makes it a positive, but that it’s fake on several levels.

Trump has already turned this against them. Why are places run by democrats such shitholes?

Not sure how it’s going to differ from regular MSM coverage.

“Real” fake news isn’t working, so now they’re trying fake fake news. This will be the new improved fake news, with twice as much fakeness as the old fake news. Certified 99.4% fake.

Politifact itself is lying. Revenues didn’t go down,

The Fakest of Fake News. Communists interfering with our elections.

Detroit has a daily newspaper it’s just that nobody buys it anymore because it’s a Leftist rag. The Detroit economy is booming. There are help wanted signs in front of almost every business. Buildings are full, more are being built. Housing is going up by the thousands across metro Detroit. Developers inside the D can’t build housing fast enough to keep up with the demand by people who want to live downtown.
.
They can run all the ads that they want but they will only be appealing to those sheep that already want to believe that high GDP and low unemployment are bad. Those sheep are the never Trumpers of course.

And when the Derp State Media get an even worse reputation because of these ads, Democrats and the media (but I repeat myself) will blame Trump.

The economy isn’t working for the Dems… so.. yes…there is truth to the statement… just not their “truth”.

Haha, the people paying for the ad got scammed. I don’t know ANYONE who watches local news anymore No one. A 90 year old grandmother turned it off too, though she still gets the local paper for the crossword. Just bought her a subscription to Epoch times because she was bemoaning that she couldn’t get good content in the local paper.

Know someone who had a family member die in a tragic accident locally. In the not so old days, everyone in town would have heard about it. No one I knew had heard about it, including myself. No one watches it.