“To you, my African American fellow citizen, please accept my apology on this day.” 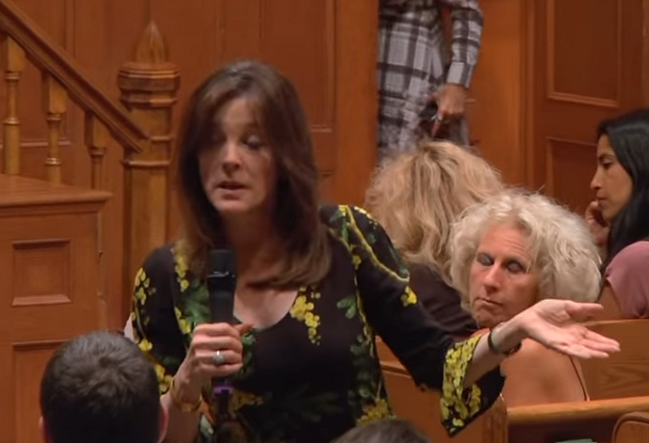 Williamson is also a staunch supporter of and advocate for reparations, and she doesn’t care what it costs.  Unlike some of her Democrat opponents, Williamson has long advocated for reparations as a part of her concept of “racial reconciliation and healing.”

In many ways, America has continued the process of racial reconciliation begun in the 1960’s. Yet in other ways, we have actually slipped backward. Yes, there are no more colored bathrooms and separate drinking fountains. But we now have mass incarceration; racial disparity in criminal sentencing; lost voting rights; outright voter suppression; and police brutality often focused on black populations.

Tepid solutions are not enough for the times in which we live; we need huge, strategized acts of righteousness, now. Just as Germany has paid $89 Billion in reparations to Jewish organizations since WW2, the United States should pay reparations for slavery. A debt unpaid is still a debt unpaid, even if it’s 150 years later. The legacy of that injustice lives on, with racist policies infused into our systems even to this day. From employment and housing discrimination, to equal access to quality education in underserved communities, to police brutality/prejudice, to lack of fair lending practices, to lack of access to quality healthcare, to insecure voting rights, America has not yet completed the task of healing our racial divide.

For that reason, I propose a $200 billion – $500 billion plan of reparations for slavery, the money to be disbursed over a period of twenty years. An esteemed council of African-American leaders would determine the educational and economic projects to which the money would be given.

Williamson feels so strongly about this issue that she leads her followers in a “prayer of apology to African Americans” at many of her speaking engagements.

On behalf of myself, and on behalf of my country, to you and all African Americans, from the beginning of our nation’s history, in honor of your ancestors and for the sake of your children, please hear this from my heart…
I apologize,
please forgive us.

With this prayer I acknowledge the depth of evils that have been perpetrated against black people in America.
From slavery, to lynchings, to white supremacist laws, to the denial of voting rights, to all the ways both large and small, that abuses have occurred — all of them evil, all of them wrong.
For all the oppression and all the injustice…
I apologize,
please forgive us.

When she leads white people in this prayer of apology to black people, she has her acolytes stand and touch the nearest black person (with their permission) and address the words (white congregants are prompted to repeat after her) directly to the black person.

She did the same thing at a 2018 Houston stop on her “Love America” tour, according to the Houston Chronicle.

Twitchy has some reactions:

Absolutely ludicrous. No white person owes me anything

Here’s the full video of the same 2016 event from Williamson’s YouTube channel:

Interestingly, and it may be pure coincidence, a woman begins screaming at about 15:40, just after the following part of Williamson’s prayer:

Williamson stops intoning her prayer at that point, and the woman’s screaming can be heard (though a camera doesn’t pan over to her).  Once she finishes, Williamson picks up her prayer where she left off:

I’m not sure this helps the “authenticity” factor Williamson works so hard to cultivate, but her possible theatrics are far less compelling than her “prayer of apology” and demand for “whatever it costs” reparations.

Speaking of endless, here’s an excerpt of Marianne’s State of the Union (doesn’t matter what year),

What matters is are blacks who came to America better off than here than those who stayed in Africa, if the a deer is yes they should shut up, if the answer is no they should return to Africa.

notamemberofanyorganizedpolicital in reply to JusticeDelivered. | July 23, 2019 at 8:30 pm

Why isn’t anyone addressing how New Age “Cultist” Marianne Williamson was a laughing stock of the nation in the Eighties when she first started her jiving?

No one should ever apologize for the color of skin God gave them!
Furthermore, how far back does this “apologizing” need to go….Egyptians? Vikings? The whole world experienced slavery at some point.
Perhaps she should focus on the areas of the world where slavery still exists- Africa,
islamic countries……..

“how far back does this “apologizing” need to go….”

Cultists can and do vote; amazing…

Slavery was from am economic system that depended on “hit the guy on the head and take his stuff.” A lot of capital was wasted on defense. One of the moves was enslave the conquered enemy rather than killing him, a win-win.

The free market and property rights made that obsolete because a slave would contribute more to society working in his own interest rather than for a master.

So more or less hopeless arguments were invented to retain slavery (“naturally subservient race” etc) to replace obsolete ones based on economics.

So it wasn’t a new and unusual institution aimed at blacks but just economic history. The free market frees the slaves. People acting white freed the slaves, you could say.

The conflict was about finally defeating a ridiculous argument.

Finally, the left has found something for which is is willing to pray.

Williamson’s prayer only serves to drive home the point that Democrats view blacks as pets or mascots put here for their amusement, not human beings.

If Williamson had prayed for forgiveness for her fellow Democrats for promoting slavery, Jim Crow laws, and terrorist groups such as the Black Panthers, BLM and Antifa, then I would have been impressed. But she attempted to demonize the innocent in order to spare the guilty. Imagine later-day Nazis demanding that everyone (including the Jews) apologize for the Holocaust and pay billions in reparations to groups connected to the Nazi Party.

I sometimes think that these people cannot be as stupid as they act. Then I hear them speak in a way no intelligent person could speak if he (or she) tried.

By any means necessary. Always be a victim (unless you are a white male, of course).

I want someone to apologize to me for the Norman Invasion of England back at Hastings.

I want an appology for the atrocities committed against Neanderthals.

Did she smoke to much ditch weed or what her issue? She’s by no means presidential.

But I so totally hope she continues in the primary until the bitter end. Can you imagine? I cannot stop laughing about the optics. I think I will need to donate to her campaign!

Anybody can donate to her campaign. Just one dollar will keep her in the running. And it will definitely be worth it, for how can someone who is that hot be that stupid?

Forget loopy and reassess her. She’s a hard radical leftist. Now I don’t think she’d win, and it could be strategically good to keep her alive — but she’s not that spiritual granola-muncher she portrayed at the debate.

One trillion dollars for descendants of slaves and the Americans who sacrificed blood and treasure to stand, not kneel, against the progress of involuntary exploitation, redistributive change, and diversity.

Exactly! The families of the people who died to set the Democrat’s slaves free deserve reparations from the descendants of those who benefitted; how much is their present-day freedom worth to them?

How much should they pay just because they weren’t sent back to Africa, which could have happened, but were made citizens and allowed to stay?

Some of my ancestors died for that cause, so I’m patiently waiting for the heartfelt apologies & large check that I’m sure is coming! (But I’m not holding my breath.)

Oprah called … she wants you on her show next week … to be joined by Cummings, Waters, and Lee.

~360,000 Americans died fighting to end slavery and the south’s economy was decimated in the process. When is enough?

As long as people neglect to laugh in their faces, they’ll keep it up.

Substitutionary atonement is a Christian concept, however for a religious leader to compel an audience of strangers to apologize is futility … for an apology to be meaningful, it must come from the heart and within ongoing human relationship …

I read something the other day from a person who refused to accept any responsibility for slavery … as I thought about it, the same rationale applies to me … on my grandmother’s side, her parents came from the UK in the 1880’s – to Alaska where grandmother was born. Post-slavery in a state where slavery was never practiced. On grandfather’s side, we came from Germany – Pennsylvania dutch – through Ohio, Indiana, Illinois to Washington state. No slaves in our ancestral records – all north of the Mason Dixon line …

If cultural / family history is a factor in this apology / reparations stuff, then there’s a whole lot of folks ought be exempt from responsibility to pay – and the recipients likewise identified by historical records – not just skin-color.

You’re taking this way too seriously, dude. Of course you’re not responsible, I am not responsible (and will not go into details; my saying it is enough) and potential recipients deserve nothing from it.

I don’t so much take this seriously, as I sometimes fall victim to the fairy-tale belief that liberals can be persuaded by thoughtful and rational discourse.

As a member of the party of slavery, Marianne Williamson probably should feel obliged to apologize.

A leftist nutjob has spoken. Mental illness is apparently more common than I thought.

The loopy stuff was pleasant and people liked it. None of her specific programs got mentioned in that debate. Maybe she was backed by far-leftists hoping to slip a real radical leftist across the finish line.

Now she’s done. Her innocent loopiness is revealed as a fraud.

What would most reasonable people prefer, an apology from Marianne, or a job from Donald?

If it were me, I’d take the money and run right over to the Republican Party, because the Republicans are the only ones listening.

Steve Harvey, about the origin of his Vision Center initiative, and the backlash
https://www.reddit.com/r/The_Donald/comments/cge5qn/steve_harvey_meeting_donald_trump_great_story_if/

HUD has been busy, not that it has gotten much press.
https://www.hud.gov/press/press_releases_media_advisories

As a white male, I’m accepting thanks for helping get you out of Africa. The initial price was high, paid by your ancestors. You, those with ancestors from a depraved continent, are the fortunate ones.

she is mentally ill–since she has no shame, she therefore has no personal honor–what a disgusting example of a human being

My ancestors fought for the Union and freed the slaves.

Many were killed or wounded in the process.