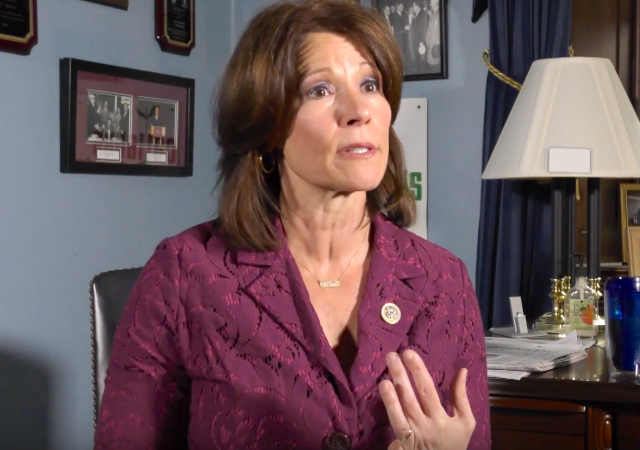 Politico has exposed the chaos within the Democratic Congressional Committee (DCCC) over the lack of diversity within the leadership ranks. Many members from the Congressional Black Caucus and Congressional Hispanic Caucus have expressed frustration with Chairwoman Cheri Bustos.

Now the DCCC, the primary fundraising arm for Democrats in Congress, has lost six of its tops aides.

The situation within the DCCC escalated so much that Busto returned to Washington, DC, this week during the six-week recess.

On Monday morning, Allison Jaslow, DCCC executive director and a close ally of Rep. Cheri Bustos (D-Ill.) — chair of the committee — resigned during a tense meeting at the party’s Capitol Hill headquarters. And in the next 10 hours, much of the senior staff was out: Jared Smith, the communications director and another Bustos ally; Melissa Miller, a top DCCC communications aide; Molly Ritner, political director; Nick Pancrazio, deputy executive director; and Van Ornelas, the DCCC’s director of diversity.

Jacqui Newman, the chief operating officer for the campaign arm, will serve as interim executive director and facilitate the search for a permanent replacement, Bustos said in a statement late Monday.

“Today has been a sobering day filled with tough conversations that too often we avoid,” Bustos said. “But I can say confidently that we are taking the first steps toward putting the DCCC back on path to protect and expand our majority, with a staff that truly reflects the diversity of our Democratic caucus and our party.”

The DCCC held an emotional meeting on Friday. People who attended the meeting told Politico that “Jaslow cried as she assumed blame for the lack of diversity in the DCCC.”

My statement on stepping down from my post at the @dccc today: pic.twitter.com/Fft4rK9DtK

After 4+ years and over 2 cycles, I’m sad to say that I won’t be on the DCCC team after today. We had strategic disagreements, but I wish them the best of luck and know that they will hold onto the House that we fought so hard to win in 2018.

Newman will now “chair an executive council” where she will perform a “national and open search.” The council will include “other top DCCC staffers, including Danny Kazin, the deputy executive director.”

Bustos came back to DC after the committee held a strained conference call on Saturday, the day after the heated meeting. For Bustos, the phone call caused more problems because Democrats said she “only ‘briefly’ apologized for the comments” she made about her family background to prove she does not hold racist views. She reminded the lawmakers and staff that “her husband is of Mexican descent, her children are half Mexican and her son is marrying an African American woman.”

The lack of diversity has led members to believe this problem could cause problems with fundraising. The Republican Party has blown away the Democrats when it comes to fundraising, but Democrats received good news last week:

Key House campaigns reported massive fundraising hauls for this early stage of the campaign cycle, according to federal disclosures filed this past week by congressional campaigns, with all Democratic freshmen but one outraising their declared Republican challengers and several GOP incumbents lapped by Democratic opponents.

All told, Democratic House candidates raised $17.6 million more than Republicans between April and June, according to a Washington Post analysis of quarterly fundraising reports. That gap could close as more GOP challengers announce their campaigns, but it represents a significant head start for Democrats.

The Democrats hope Bustos will act on their demands to perform an “immediate restructuring” to the DCCC leadership to bring back the calm the party desperately needs.

The staffers and sources do not have their hopes up because “it’s unclear what immediate actions, if any, Bustos intends to take.”

This seems to be coming to a head in the very near future.

I expect there will be a faction of the Dems that will be ex-communicated no matter how many times they apologize for being born white. They will have a huge identity crisis and deserve every bit of it.

Guess I missed the correlation between race and fund raising. Glad the DCCC is on the case! This should help immensely!

The Really interesting take on this for me is – White Women are no longer considered diverse.

Intersectionality has decided that White Women are oppressors.

So, Democrats have decided to go into this election with a staff selected by Affirmative Action. Well, good on them for sticking to their convictions.

as far as its effectiveness: “That’s a bold move, Cotton, lets see if it pays off.”

Now can we just stay out of their way as they proceed to self-immolate?

No freekin’ way!! That’s what Hillory & company did in ’16 when the dems were so sure of victory.

I think Trump should tweet support for one side. Doesn’t really matter which side, either.

Alternating sides would be the best.

It seems like, eventually, all leftist revolutions consume their own members. The participants deemed insufficiently “pure” on ideological grounds, or as in this case, racial grounds, are purged from positions of power.
It is an open question at this point whether or not those cast out will meet the same fate as Trotsky, who had an unfortunate encounter with an ice ax, courtesy of Stalin.

It’s like a bunch of cats in a sack.

The good news (well, “progressive” good, anyway) is that it’s a fine opportunity to clear out any men on staff, putting the Women’s Caucus solidly in charge. That’ll put the Patriarchy in its place, all right.

It does seem that “diversity” should include people who aren’t solid creatures of the Feeble Left. The D’s are supposed to be a national party, after all, and a little representation probably wouldn’t hurt.

No matter what this bunch does, I’m looking forward to a seismic-level landslide in 2020.

For the GOP I’m sure it’s good to know the DCCC and the Dems paying attention to them think their only problem in $$$ is lack of diversity in the staff.

So, while deep in debt and failing to raise money, this is what they fixate on?

When your only tool is a hammer, everything looks like a nail. You start seeing nails everywhere and pounding them down becomes an obsession.

Lack of diversity or color judgments (e.g. racism). A positive development that is threatened by [social] progress.

Has anyone informed the DCCC that it is illegal to hire and fire based on skin color, sex, or sexual orientation? Or do they just not care?

They have just opened themselves up to lawsuits.

Don’t tell them. Long about June 2020 let the Federal charges be filed.

Congress probably exempted themselves from that . . .

I hope when it comes to fundraising, if they take in too much money from white males, they stop taking their money to let minorities and trans have equal representation in campaign contributions.

I’m told anything less would be racist, misogynistic, etc

Yes! If the Dems are wholly into this, they would reject corrupt white money. But then again, they could also see it as a form of reparations which the enlightened Dems will use to formulate policy to benefit black people.Just like they’ve been doing for the last 50+ years!

So what I am reading is they were basically force to resign or be fired. So literally they lost their jobs for being white.

What’s “democratic” about the committee?

Why did it take long tense meetings? “I’m sorry, you’re white, we have to let you go.”

Or did they have to fake a bad performance review, based on lots of new diversity categories, and shame these people into quitting as if it’s their fault in some way.

I think it took so long because they couldn’t come right out and say “We’re firing you because you’re white.” I think they had to have a long conversation which led to the white folks “deciding” to leave. That way they can’t sue for discrimination. And you KNOW there are white people who have totally bought into the white-person-bad idea that they would gladly step down.

THEY MUST not have gotten the memo, the DNC was going to stop offering free pizza’s every other Saturday night and start offering Stewed Chitterlings & Cornbread, Menudo & Burrito’s or Chow Mein with Vegtables, depending on the week of the month….all to celebrate diversity and equality.

If democrats ever get the power they want how soon till no whites are allowed to be hired if there are any black or Hispanic or illegals who want the job even if not qualified….

Since they want to have more diversity, I hope they lay it on good & hard!

The chairperson has to be as dark a black woman as they can find, and she (must be a woman, of course) would ideally be LGBTQ+ and um, specially abled. Wouldn’t want any abled sexist cisgender people, now would they! No white women at all. That wouldn’t be diverse!

The illegal aliens, oh sorry I meant “undocumented immigrants,” should be well represented too, of all colors but white, speaking as many different languages as can be mustered (English wouldn’t do, too many Americans speak that language.) They’ll proudly usher in the New Millennium with Congolese, Chinese, and Russian languages among them, and some of the more obscure dialects of South & Central America. Diversity!

The DCCC will also benefit from having many different flags, from a multiplicity of nations, but with the U.N. flag highest among them, and they wouldn’t want the old US flag- that’s only handy for kneeling or burning. More diversity!

Yes, that’s the recipe for success, and this cunning plan will be sure to unseat that usurper to the Hillary throne, Donald J. Trump! It really can’t fail, because DIVERSITY!

Those who can’t pass it in their sleep should be D.Q.’d immediately.

California leftists have even corrupted the Bar exam.

The California Bar lets illegal aliens take the exam, so yeah, they have really corrupted the bar exam.

Smells like reparations to me. LOL, suck it dems.

*Wo*, getting rid of experienced political operators that know how to fundraise and get things done are wacked for “Diversity Hires”…and right before the 2020 elections…..

So the structure known as the Democratic party is burning down. Not only is it being consumed by fire, its structure is rotted, the foundation is crumbling, and the entire structure has been teetering on collapse for over a decade. So what is their solution? It must be the lack of minorities in their leadership, it must not be enough identity politics, it must be too few demands for socialism and sanctions against Israel, and it must be not enough bigotry.
>
Everything is collapsing around them and these Democrats are now doing all they can to double down on that which has destroyed their brand over the last decade.
> Works for me.

Because everyone besides the elite of the Politburo is a xenophobic racist sexist Islamophobic transphobic heteronormative white supremacist that will be done away with.

I want to repeat what JL said that it is against the law to fire people based solely on race.
These people have an excellent basis for a lawsuit

I thought it was only against the law to fire certain protected groups because of race?

Some big donors maybe out to lunch when they call or out of town as they explain that their skin tone is disgusting but they should give big checks out of white guilt that will never be forgiven.