Austin, TX, Will Allow Homeless to Camp on Sidewalks, But Not in Front of City Hall

Austin, TX, Will Allow Homeless to Camp on Sidewalks, But Not in Front of City Hall

“people will be able to sleep, lie and set up tents on city-owned sidewalks, plazas and vacant non-park space” 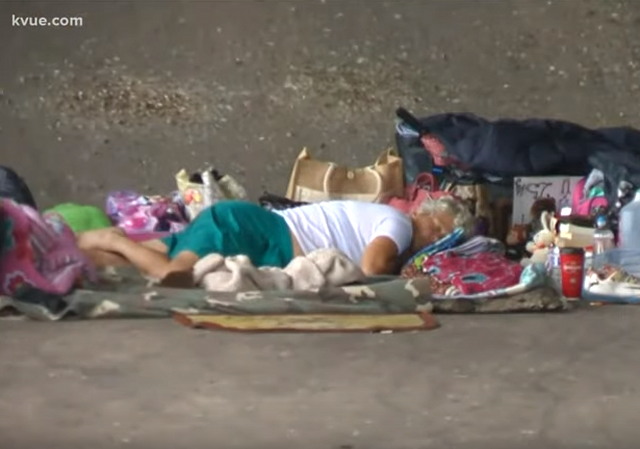 We have pointed to the massive homeless problems in Seattle, Portland, and Los Angeles. Now the city of Austin, Texas, has decided it wants to take a step closer to the same future.

The city council has voted to rescind prohibitions on camping, sleeping, and panhandling on public sidewalks – but not in front of city hall, of course.

Elizabeth Findell reports at The Statesman:

Camping comes to Austin public spaces — but not at City Hall

After emotional testimony last week regarding homelessness in Austin, City Council members rescinded prohibitions on camping on public property. Starting Monday, so long as they are not presenting a hazard or danger, people will be able to sleep, lie and set up tents on city-owned sidewalks, plazas and vacant non-park space.

Except, not in front of City Hall itself.

City Hall building guidelines implemented by former City Manager Marc Ott in 2012 disallow anyone from using the outdoor plaza, covered amphitheater or raised mezzanine from 10 p.m. to 6 a.m. unless a city meeting is going on inside. The rules specifically prohibit sleeping, camping, storing personal property and erecting tents.

City spokespersons confirmed this week that the camping prohibition remains in place. City Manager Spencer Cronk said in a text message that staffers are reviewing the policy, but did not indicate whether he intends to rescind it.

Mayor Steve Adler said Friday that he does not think the City Hall camping ban should be immediately rescinded. He said it should be reviewed as staffers seek to identify, by August, the places where people should and shouldn’t be allowed to camp in Austin. Adler acknowledged that some business owners objected to the ordinance changes out of concern about the impact people camping in front of their businesses could have, but he said they shouldn’t consider the City Hall ban to be hypocritical.

Imagine being a business owner in this city and knowing that the city council will allow people to camp out in front of your office or shop, but not the offices of the people making the rules. Why would anyone put up with this?

Camping was banned at City Hall in 2012 after Occupy Austin protesters refused to leave.

The group was allied with the Occupy Wall Street, a movement against economic inequality.

Many started living on the steps of City Hall. After four months, the group had cost the city almost a million dollars in public safety and cleanup fees.

That’s when Austin started banning people in the city plaza from 10 p.m. to 6 a.m.

Here’s a short video report on the story from KVUE News:

Texas Governor Greg Abbott said on Twitter that the state could override this:

If Austin— or any other Texas city—permits camping on city streets it will be yet another local ordinance the State of Texas will override.

There are far better solutions for the homeless & citizens. https://t.co/xYezoovVCg

Knowing what we know about how this sort of policy has worked out in other cities, Austin’s decision to allow this boggles the mind.

“Camping.” That’s so cute. And “bankruptcy” is probably a “financial lacuna” there, “divorce” a “marriage recalibration,” and “death” a “health malfunction.”

But I suppose anything a bit more honest, like “itinerant slum” or “social death-spiral,” take up too many syllables.

I personally want to see all criminal invaders suffer a health malfunction.

A golden oldie from about 1956, janitor = custodian.

And not in front of the homes or properties of any city officials, I’m sure.

Nor in front of the homes of those who are “important”, ie, wealthy and connected.

They all live in gated communities. No common folk or “campers” allowed.

The mottos not “let’s keep Austin weird ” for no reason

Quickest way to stop this is (and here I channel my inner Saul Alinsky) to transport those homeless folks to the streets and blocks on which the city council, city managers, and mayor live, and bid those homeless to set up their camps. When the police shoo them away, bring them back.

Illegal? Sure it is, but it should be illegal to camp anywhere on a public street. That the city leaders protect themselves but not the public is, ahem, hypocrisy, and Alinsky would be all for demonstrating that.

The unofficial city motto is “Keep Austin Weird”. IIRC there is one City Council member elected at large to represent the homeless population.

Texans snivel and whine about Californians in 5, 4, 3…

I don’t mind Californians, as long as they stay in California. Unfortunately, they’re like stupid fucking cockroaches that keep infesting other parts of the country with their insane politics. Exhibit A: Austin, TX.

The homeless provide a rich diversity to the Austin community (and to any other progressive utopian city or state). As with the undocumented… our next Nobel Prize winner may come from this portion of society.

Yeah. 1 Nobel prize winner and 10,000,000 alcoholic drug addled losers in desperate need of a mandatory county hospital or care facility until they dry out, clean up, and get a job so they can support themselves.

Notice the timing. Perhaps they’d like as many of Texas’s homeless and illegals as possible to come to Austin to be counted in next year’s census…

Nothing new! I spent a year in Austin in 2016, there were homeless people under every overpass – morning, noon, and night.

But, plastic bags were illegal. . .

Aaaand, no smoking! Cigarettes of course, not pot

I live next to Austin. The homelessness and panhandling is in the stratosphere. I use to love Austin. It’s amazing how a once beautiful city could be allowed to self destruct. The money here is ridiculous and middle class America can no longer afford to live in it. It’s the rich and homeless now. What once was a great music town is now a pitiful trash heap of history.
I hope Gov Abbott does do something, someone please stop the insanity

I avoid it at all costs

How about this for a solution? Instead of building a border wall, we build walls around sanctuary cities and those which welcome the homeless. Close the gates when the wall is completed and start moving the illegal alien and homeless populations there. Of course, once the gates are closed, no one may leave the city, for any reason. Anyone attempting to do so will be summarily executed.

This is an example of how the ruling class exempts themselves from what they impose on the serfs.

“Some pigs are more equal than others.” comes to mind for some reason.

Nobody seems to recall exactly why vagrancy laws were enacted. Austin will rue the day.

Austin is the San Fransisco of Texas!

Why don’t the homeless in Austin take a cue from the vagrants in my city? Just hang out in front of the police department, stolen shopping cart and all ~

Even the city council of Eugene, Oregon, aka Austin on the Willamette, isn’t that stupid!

PUT THESE people INSIDE City hall. They would probably be more useful than those THERE????

What is to be expected from a democrap city?