The subtext is clear, America is a racist country occupied by fascists and the only solution to stopping them is violent retribution. 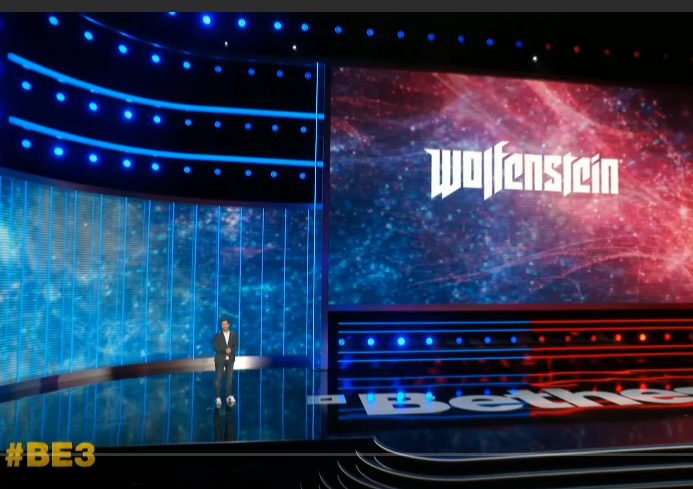 This past week has come and gone with the year’s largest video gaming show. Every June, E3 (Electronic Entertainment Expo) is used as a trade show for the largest video game developers to show off their slate of upcoming games for the next two years. Bethesda Softworks brought back the development team of the newest series of Wolfenstein games to show off footage for their soon to be launched spin-off game Wolfenstein: Young Blood.

The team, mostly based out of the Swedish studio Machine Games, has gained a lot of attention since the 2014 relaunch of the series Wolfenstein: The New Order. The critically acclaimed relaunch of the series that became the first successful first-person-shooter game in the 1990s Return to Castle Wolfenstein was one of the most popular and well-regarded shooter games of this generation.

And then 2016 happened. In the lead up to the game’s immediate sequel Wolfenstein II: The New Colossus, the social media team of the game quickly gained attention for their willingness to pick fights with Alt-Righters and Neo-Nazis on twitter. Granted it probably isn’t fun to have your comments section filled with anti-semites and racists spamming you for anti-Nazi propaganda but the development team seems to have gone hard into embracing the leftist/Antifa notion that the Trump/Brexit victories were the first signs of a resurgence of fascism in the west.

Three years later, the team is still making allusions to fighting the “Nazi Occupation of America” with a smirk that says “yah you know what we meant by that.”

This would all just be tedious pandering and dog whistling to the leftist “Punch a Nazi”/Antifa crowd if it wasn’t already clear that the far-left already regards most of the American Right as fascist. Dan Harmon, famous co-creator of Rick and Morty, famously stated that he thought 29% of Americans were Nazis (a number that roughly correlates with the number of adult Americans who voted for Trump).

The infamous Alt-Right numbers between 2000-75,000 people in total (depending on how you define it). That’s nowhere near enough to sway a country’s election in a nation with over 330 million people. Yet the mainstream media continues to pander to the left, complaining that centrist conservatives like Ben Shapiro and Jordan Peterson are Alt-Right.

Certainly, there’s nothing wrong with an anti-Nazi video game as they’ve literally defined the entire shooter genre with games like Medal of Honor, Brothers in Arms, Battlefield 1942, World of Tanks and the original Call of Duty games. The Nazis make great fodder for a genre the needs hundreds of faceless evil vessels to destroy.

When my liberal friends sitting next to me watching the broadcast joke that Wolfenstein is portraying a semblance of their real life where they’re already surrounded by Nazis, the actual purpose of the game begins to worry me slightly. The first game was fun in 2014 because everyone agreed that the Nazis were bad guys. Now in 2019, half the country thinks the other half of the country are Nazis that deserve to be shot and a major video game series is pandering to that sentiment.

The games themselves have become more and more overtly progressive with the last few entries. In Wolfenstein II: The New Colossus, you fight in a resistance group alongside communist and black panther characters against the Nazis occupying the United States (subtle).

Some of the implied subtext of the game, specifically a subplot involving the main character’s ultra-racist father, suggests that America is a country all too ready for a fascist white-supremacist take over and that it wouldn’t even change all that much about an already racist country.

As if the game wasn’t already on the nose, there’s a line of dialog in the game between two Nazis talk about the fact that violence against people you disagree with isn’t okay. The subtext is clear, America is a racist country occupied by fascists and the only solution to stopping them is violent retribution.

this "so much for the tolerant left" convo between two Nazi guards in Wolfenstein 2 is my favorite video game thing i've seen a long time pic.twitter.com/SUy3WXA5eM

As is clear from the presentation of Wolfenstein: Young Blood, much of the same subtext is going to be implicitly returning with this sequel, albeit with the added caveat that the lead characters are female now (a progressive trope I wouldn’t be surprised if it was done implicitly to annoy the same demographic that already hated the previous game).

Obviously, none of this is new. The left has been wrongly accusing the right of being Nazis since before Gore Vidal accused William F. Buckley of being a crypto-fascist on live TV in 1968. Even so, the cultural embrace of this narrative by the far-left is distressing at a moment when it’s clear that disingenuous members of the media are willing to do anything to knock popular conservatives off of social media. Stories like Wolfenstein II need to be deconstructed and shown as repeating and tired.

There has not been one real innovation in video gaming since the .com bust. The industry flatlined 15 years ago.

The left has a lot invested in a race war. It is the core of the young left’s beliefs, confused by the fact that a substantial number of the white young left see themselves as black or some other meaningless minority that is white in all but imagination (middle eastern is the fad du jour)

I didn’t gripe about the movie Red Dawn. I refuse to be bothered by this. Especially because “in the lead-up to the game’s immediate sequel” the game would have been fundamentally finished already and any perceived anti-Trump spin was just that, spin.

The Left && Feminists have been staging a takeover of the gaming industry, for several years now.

Ever heard of Gamergate?

Old Joke :
If you make a game doing everything the Left / Feminists say NOT to do, you will succeed wildly.

Companies that ‘get woke, go broke’, really do in gaming.

Are you referring to the the cultural revolution’s take down of MSFT a few years ago for having scantily clad go-go dancers?

Internally there was a truck load of finger wagging and self rightious apologies after that. Well now the new campus will have a gender neutral bathroom on every floor. The locker rooms are designed to handle whatever gender you want to be–please no recording. My Xbox One was the biggest waste of money ever. It’s now sitting in a closet waiting to be tossed in the garbage the next time we clean.

They’ve been TRYING to stage a takeover. Thus far all of the virtue signaling has been roundly rejected by actual gamers.

Every company and game that has publicly virtue signaled and kowtowed to the SJW crowd that DOESN’T BUY GAMES, has seen significant backlash and lost sales. It doesn’t seem to stop idiot SJW types high in some organizations – so-called ‘games journalists are particularly bad, but they’re dying because nobody listens to them.

The takeover of the gaming community thus far has absolutely not been successful.

The NAZI Party was a totalitarian, nationalistic socialist group. The Communist Party was a totalitarian, international socialist group. The Fascist party was a totalitarian corporatist movement. However, in all three cases, all three movements were essentially the same, in that they were all totalitarian regimes which were led and controlled by a small oligarchy which maintained power by violently oppressing their political opponents and the majority of the populous. In fact, Benito Mussolini provide this definition of Fascism:
“1.”Everything in the state”. The Government is supreme and the country is all-encompassing, and all within it must conform to the ruling body, often a dictator.
2.”Nothing outside the state”. The country must grow and the implied goal of any fascist nation is to rule the world, and have every human submit to the government.
3.”Nothing against the state”. Any type of questioning the government is not to be tolerated. If you do not see things our way, you are wrong. If you do not agree with the government, you cannot be allowed to live and taint the minds of the rest of the good citizens.” – urbandictionary.com

In none of these political systems was it possible for a populous vote to thwart the will of the oligarchs who controlled the nation.

The US, by contrast, is still a representative democratic republic which is responsive to the will of the people. While it is true that the US government was moving to oligarchical control of the nation, prior to 2016, that changed with the election of Donald Trump. Trump’s agenda, while nationalistic, has been all about reducing governmental control of the citizenry. Trump was the anti-Fascist, anti-Nazi, anti-communist, anti-oligarch President. He is exactly what these liberal, Progressive jerks claim to be supporting. Yet, they seem to embrace totalitarian systems, such as communism. Either they are illiterate, deluded or they are lying.

“Either they are illiterate, deluded or they are lying.” Embrace the power of “and”. They will do or say anything as long as they believe it will increase their power.

Minimization the actual victims is repugnant. They suffer by appropriation. Words are violence, too!

Comments such as this game developer’s are utterly confusing to me, because, with all this unabashed, gleeful and now-mainstream Jew-hatred and Israel-hatred being spewed, daily, by the Dhimmi-crats and their sundry jackbooted, Muslim supremacist allies, it feels as though German National Socialism has been adopted by the Left, at least where Jews are concerned.

Nothing new for the Arabs, they were on board with Adolf and provided troops to aid in the war.

The first Wolfenstein was groundbreaking. The next several sequels were mostly as fun and intriguing. But when the last sequel got all woke, the franchise was doomed.