Winner of #DemDebate Night One: John Delaney, whoever he is

Winner of #DemDebate Night One: John Delaney, whoever he is

Biggest Loser: Elizabeth Warren, who came across as just another politician on stage. 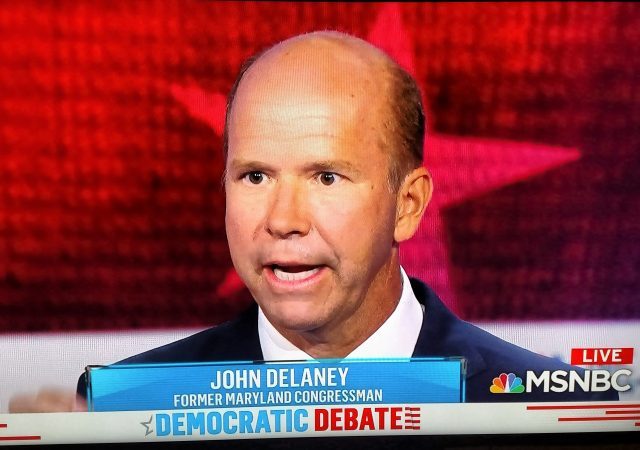 The first night of the Democratic Debate was unimpressive. Most of the candidates were trying to out-liberal the others. It was all so, shall we say, unimpressive.

The moderators clearly favored Elizabeth Warren, repeatedly going back to her for questions, particularly at the beginning.

Let’s focus on the purpose of an early debate — for all but the top few candidates, it’s name recognition and not coming across as a marginal freak. Tulsi Gabbard achieved a little of that, but far and away the voice of sanity was someone I never had heard of.

He spoke about how Medicare for all, which depends on reimbursement rates so low it would bankrupt most hospitals, was not viable. That goes against the grain of the Democratic Party, where most of the leading candidates have jumped on some version of Bernie’s plan.

Delaney began to bring up the point that was being missed by every candidate and the moderators ( why do you want to take private health insurance away from ppl who want to keep it?) and the mods cut him off. #DemDebate

When I heard this person speak, my first reaction was, who is this guy.

Turns out it’s John Delaney, a former Congressman from Maryland.

And who is John Delaney?

Being the “not completely crazy” Democrat could get Delaney media attention.

John Delaney is kind of, you know, impressive and seems to know stuff.

If so, Dan Bongino says watch out.

What was interesting is that after Delaney had some good moments, the moderators pretty much ignored him.

John Delaney has to be the most frustrated #DemDebate participant tonight. https://t.co/MzgJJmBc2T

Poor Delaney is dousing himself on gasoline and juggling torches to get the attention of the moderators.

Elizabeth Warren was the biggest loser. She already has name recognition, so her task was to establish herself as the only real contender on stage. And she didn’t do that. Warren came across as just another politician on stage. 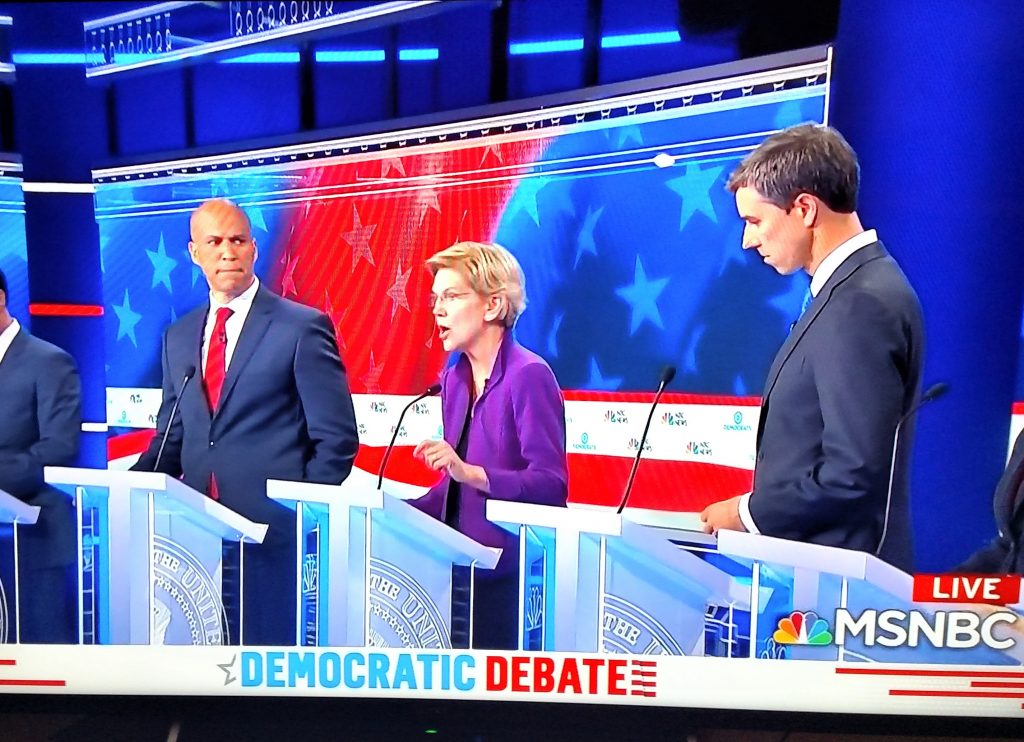 She stuck to her tired stump speech on how the system is only working for the rich and powerful, but that was in response to a question pointing out that a large majority of Americans feel the economy is good.

Warren was asked if she had a plan to deal with Mitch McConnell. She babbled on about keeping up the fight, but the bottom line was she doesn’t have a plan. She appeared weak.

Spoiler alert. Elizabeth Warren does not have a plan for Cocaine Mitch. pic.twitter.com/PwmgAROmSc

Warren’s unimpressive performance should not be a surprise to anyone familiar with her 2012 debate performances against Scott Brown. She didn’t do well at all, despite her much-ballyhooed high school debating history. She’s wooden on stage because she sticks too heavily to a script. Warren emerged as just another politician on stage.

John Delaney emerged from the complete wilderness to someone about whom people are asking, ‘who is this guy?’ For someone with almost zero name recognition, mission accomplished.

thanks for watching this is I do not have to

Sorry you are totally wrong. I can’t believe that most of the country is thinking.
The biggest winner of todays debate is Donald Trump.

Exactly! Such an unimpressive group!

So Beto broke into a little of that Spanish lingo. And Spartacus asked for dos tacos y un cerveza–just to keep up with Beto.

Both of these clowns should ask themselves, “How did that Spanish language thing work for Jeb! in 2016?” Not so well. And Jeb speaks excellent Spanish–which is what happens when you sleep with your Spanish teacher who’s also your wife.

I’m pretty sure this steaming pile of San Francisco street feces will not resonate with middle class American voters.

Delaney is from Maryland.

Delaney caught my ear since I wasn’t actually watching it and for a moment I thought someone had hacked the debate. He will not get very far because he is reasonable on the one issue that I heard him discuss which is private health care. The bit about hospitals going broke would not even slow down the average Dem. Sanders would demand that they stay open and take huge pay cuts. Same for doctors. If the next group is as lame as this group, Trump is a sure bet.

Delaney and Tulsi for sure. Normal stands out.

He spoke about how Medicare for all, which depends on reimbursement rates so low it would bankrupt most hospitals, was not viable.

Yes, excellent point, and I’m surprised more of these mighty healthcare champions don’t address it. [What am I saying? I’m not surprised at all.] Medicare pays miserably, so miserably that many providers stay as far away from Medicare patients as they can. Busy practices with plenty of patients who have other and more munificent insurance plans can afford to take substantial numbers of Medicare patients, which is the only reason the whole precarious system doesn’t collapse into insolvency.

Medicare for all means—eventually, after the smoke clears—no health care for any.

I condemn myself for thinking of Kaw-Liga.

notamemberofanyorganizedpolicital in reply to malclave. | June 27, 2019 at 9:16 pm

John Delaney was my congressman for a couple of terms but quit 3 years ago to run for President. He was the first declared candidate. He won our district from Roscoe Bartlett after the MD legislature Gerrymandered our district so it would go to a democrat. He owes his seat to the corrupt House speaker and Senate leader who picked him to run. He’s a multi-millionaire. He never answered a single letter I sent to him.
He’s all about himself.

Sure he’s not a nice guy, one can assume anyone who climbs the greasy pole that far is not. But he has a brain and business sense, which exists in only one other candidate, and that’s the current president.

The ads write themselves

Missed it. Did anyone ask a tough question?

“In a Democratic field that includes dingbat socialist Bernie Sanders, callow ward heeler Corey Booker, and eternal sophomore-class president Kirsten Gillibrand, it was perhaps inevitable that Elizabeth Warren would come to be known as the smart one. And yet, that reputation turns out to be unearned. She may walk tall with the dwarves, but in the great sprawling zany Disney World of American politics, she still isn’t tall enough to ride Space Mountain…”
https://www.nationalreview.com/2019/06/elizabeth-warren-plan-economic-patriotism/?utm_source=Sailthru&utm_medium=email&utm_campaign=WIR%20-%20Sunday%202019-06-09&utm_term=WIR-Smart

The best part is the propaganda machine didn’t get the winner right. They claimed yesterday Fauxcahontas the winner before the debate even happened. According to this Delany, outdid her and an online poll says Gabbard won.

Gabbard is the tallest woman, as tall as some of the men, and some people have called her attractive. She I guess successfully explained away some negative comments about LGBTQ she had made in her past, and I guess it was forgiven.

I didn’t hear her say anything interesting about policy.

I started about 45 mins in and turned it off after about 10 minutes. There was no debate. Just Socialist talking points, each candidate taking their turn at regurgitating them. So boring. Beto and the moderator having a dialogue in Spanish was a huge turnoff as well. Should be for all Americans.

tonto, sorry beto is auditioning for the new Hispanic party that will start after the dems get amnesty through

Warren didn’t do great on stage for debate, but that’s not her strength. Its the general media coverage of her pandering to voters that want something for nothing. She sounds “reasonable” to those wanting something for nothing and to people that are having a hard time. Age old give away to get votes and she’s great at it.

I’m reminded of the old Firesign Theater routine about a candidate whose slogan was “Not Insane!”

Maybe so, but as far as I can see, ALL the DemoncRat candidates can’t use that sign unless they’re lying. Which I have no doubt ALL of them are – about everything.

If one of those clowns told me the sun rises in the east, I’d get up early to double-check for myself. (Apologies for insulting normal clowns everywhere.)

Watched it all the way through. I’m a registered, very disillusioned, old school Dem. Delaney was a shock, if normal can be shocking. It’s early, but based on this debate, I would vote for him he’s an option in the primary. If he remains normal, and makes it to the general, maybe the party isn’t all insane. But no way, no how, am I voting for any of the others.

Ms Warren (and Mr Sanders), why do you want to put most of America’s hospitals, and many of America’s physicians, out of business?

Probably because with so many people getting useless degrees they want to make trans doctors of them. What’s that got to do with putting hospitals and docs out of business? Nothing, but since when does the left care about consequences?

Anyone to the right of Stalin would seem to be a centrist in the clown car of democrats.