Meanwhile, 350 migrants from Ebola-hit Congo have made their way into Texas. 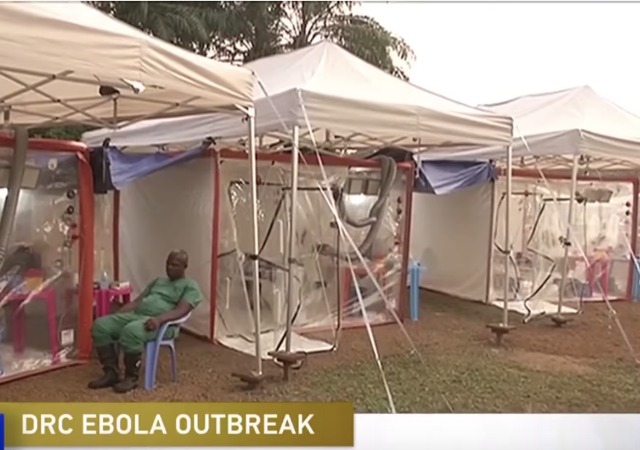 We have followed the outbreak of Ebola in the Democratic Republic of the Congo for over six months.

Officials have reported nearly 3,000 cases of the hemorrhagic disease. However, the actual number of infected Congolese may be a third higher than figures show, experts have warned.

A World Health Organization director of health emergencies said aid workers may be missing up to a quarter of cases because people are refusing treatment.

The outbreak has now been going on for around 10 months and is getting worse – week-by-week infection rates are far higher than at any time before March.

‘We may be missing up to a quarter of cases.’

Public health officials have also indicated this particular outbreak could last as long as two years.

“This outbreak is not under control at this time,” Centers for Disease Control and Prevention director Robert Redfield told the House Foreign Affairs Committee this week. He said the virus could rage in Congo for as long as two years.

Speaking to reporters Thursday in Geneva, Michael Ryan, overseeing the response for the World Health Organization (WHO), agreed.

“In a worse case scenario, I can definitely develop a scenario where this is going to take another year or two years,” Ryan said. “At this point, the outcome is effort-related. Are we prepared to make the immediate, sustained, comprehensive effort to bring this disease under control?”

The situation is such that the World Health Organization (WHO) warns our world is entering “a new phase,” where large outbreaks of deadly diseases like Ebola are a “new normal.” Furthermore, the deadly virus isn’t the only biological hazard facing us either.

“We are entering a very new phase of high impact epidemics and this isn’t just Ebola,” Dr Michael Ryan, the executive director of the WHO’s health emergencies programme told me.

He said the world is “seeing a very worrying convergence of risks” that are increasing the dangers of diseases including Ebola, cholera and yellow fever.

“I don’t think we’ve ever had a situation where we’re responding to so many emergencies at one time. This is a new normal, I don’t expect the frequency of these events to reduce.”.

Meanwhile, Texas officials scrambled this week to find French-speaking volunteers to help with 350 Congolese migrants arriving in the state.

“We didn’t get a heads up,” Interim Assistant City Manager Dr. Collen Bridger told KEN 5 after a group of 350 Congolese migrants arrived in the city unexpectedly. “When we called Border Patrol to confirm, they said, ‘yea another 200 to 300 from the Congo and Angola will be coming to San Antonio.’”

…In a press call on Wednesday afternoon, Brian Hastings, U.S. Border Patrol Chief of Law Enforcement Operations, told reporters this was the first large group “ever recorded in Border Patrol history solely from Central and South Africa. We’ve never seen that demographic in a large group of that size before.”

Given the continuing Ebola crisis in Central Africa, it might be useful to either seal the border or prepare for even larger groups fleeing Ebola and civil war.

And you know not a single one was screened for anything

When I was growing up, in school they tought us that one of the major reasons for immigration control was to prevent the spread of diseases from other countrys. Now we have people from Africa and China (and who knows where else) crossing our southern border. When the next national pandemic hits who will the MSM blame.

Well, you can’t expect people to give up their Constitutional right to come to America just because they are highly contagious with a deadly disease, can you?

well, that video is a joy filled view of the future. Thanks Dems.

Meanwhile, 350 migrants from Ebola-hit Congo have made their way into Texas.

So, obviously, we need more.

I’m sure government is working on it right now.

biological threats on the level of the ebola virus are indifferent to politics–isn’t one of the fundamental responsibilities of the national government safeguarding the public health?–how on earth could ANY sane person advocate the admittance of immigrants from a known infection locale without taking even the MINIMAL steps to protect the host population?–public health, especially regarding as lethal a threat as ebola, is not an area where we can afford even a “minor” mistake

The Democratic Republic of Congo has war zones, and also people who are willing to murder strangers, including medical people. They will be visited by the 4 Horsemen of the Apocalypse, one of which is Disease, or Pestilence.

The disease cycle cannot be stopped in such a region.

Round them all up and send them over to camp out near “The Great Wall of Obama” in Washington, “District of Corruption”; maybe we’ll get lucky while they wait for their Asylum Court Date. The Halfrican didn’t have a problem sending our military over there to get infected and didn’t have a problem bringing back infected persons for treatment, so it must not be as dangerous, right?