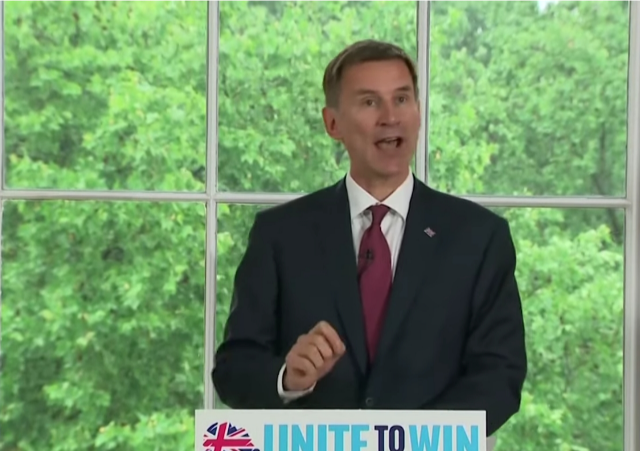 British Foreign Secretary Jeremy Hunt has sided with U.S. President Donald Trump in his ongoing Twitter spat with London Mayor Sadiq Khan. Hunt said he “150 per cent” agreed with the U.S. President’s comments on Khan. Present Trump had shared a tweet by the conservative British columnist Katie Hopkins highlighting rampant knife crime in London. “London needs a new mayor ASAP. Khan is a disaster — will only get worse!” he commented on the tweet.

“But the sentiment is enormous disappointment that we have a Mayor of London who has completely failed to tackle knife crime and has spent more time on politics than the actual business of making Londoners safer,” Hunt said. “In that I 150 per cent agree with the President.”

The war of words began last month, when Mayor Khan attacked the U.S. President, likening him to a ’20th-century fascist’ ahead of his first state visit to the UK. Trump fired back questioning Khan’s track record on crime and calling him a ‘stone cold loser.’

Jeremy Hunt has vigorously defended Donald Trump for quoting the far-right commentator Katie Hopkins in an attack on the London mayor, Sadiq Khan, as Downing Street initially declined to condemn the US president’s words.

The foreign secretary said he would not have used the same words as Trump but he would “150% agree” with the overall sentiment.

The Hopkins post referred to the capital as “Khan’s Londonistan” and “stab-city”, after the deaths of three men in separate attacks on Friday and Saturday.

Trump then sent a tweet of his own a few hours later saying Khan was “a national disgrace who is destroying the City of London”.

LONDON needs a new mayor ASAP. Khan is a disaster – will only get worse! https://t.co/n7qKI3BbD2

Khan, who lobbied the government to open the UK to refugees in wake of the 2015 migrant crisis, has presided over a worsening law and order situation in London ever since. “Knife crime has increased by 52 per cent, burglary by 17 per cent and robbery by 59 per cent. Last year there were 135 homicides – a 24 per cent increase since 2016 and the highest number for more than a decade,” The Sun reported last month.

The irresponsible immigration policies advocated by Khan and his allies in the Labour Party are largely responsible for spike in number of Islamists in the country. The UK is home to some 35,000 Muslim ‘fanatics’, the official estimates claim. The ‘homegrown’ jihadists are today the ‘biggest threat’ to the country,’ the head of the UK intelligence service MI5 confirmed recently. The country has the third-largest Muslim population in Europe, after France and Germany.

Foreign Secretary Hunt’s comments come as he is in the midst of a fierce contest for the leadership of the Conservative Party and the British premiership. The move could be seen as an attempt to shore up support among the traditional right-leaning base of the party. Last month, Trump hinted his support for the former UK Foreign Secretary Boris Johnson. In a newspaper interview, Trump called the pro-Brexit contender Johnson an “excellent” choice to succeed Prime Minister Theresa May. Unlike May, both Johnson and Hunt have openly backed a no-deal Brexit if Brussels fails to give the UK a better deal.

Trump on London mayor Khan: “He has been a not very good mayor, he has done a poor job”

England, especially Londonistan, is a toilet.

Especially with the London Major CON in charge of the invasion forces.

When are we going to get rid of our similar incompetent political hacks?

The wobbly Oxfordians at the Guardian and mayor Khan would have us believe murder and mayhem committed by knife-machete-hatchet wielding immigrant is an improvement in English lifestyle.

Another improvement being lorries piloted by nondescript ‘people of color’ plunging wildly into crowds of infidels at Parliament and farmers markets and Christmas faires – whilst screaming allah akbar, and other, mostly peaceful slogans.

Things are looking up, mate.

“Far right” Katie Hopkins. They just throw names around like bratty children in a school yard.

London is no longer English.

How on earth did Britons elect this vile turd Kahn as the Mayor of their capital city? He is bad news.

notamemberofanyorganizedpolicital in reply to MAJack. | June 18, 2019 at 3:31 pm

Election Fraud – It’s not just for Democrat Party any more.

He was elected by the same means the Democrats intend to stay in power in America: Labour so mangled immigration that the ethnic and cultural make up of the city is no longer English, but a mix of ethno-centric, non-Christians, welfare recipients, housing assisted, and/or socialists that will vote with Labour to make even further changes they approve of and to keep the welfare and social privileges going.

My daughter has lived in London for the last 15 years (married a Londoner born and bred, and the two of them have two children).

London’s choices in mayors have been, shall we say “eccentric”. Khan was preceded by “Red Ken” Livingston–who makes Bernie Sanders look like a President of the Tea Party. I think bicycle riding Boris Johnson was Mayor at one time as well.

He has a point. Sadiq Khan is not your friend.