Trump: Former UK Foreign Secretary an “excellent” choice to succeed PM May who steps down June 7 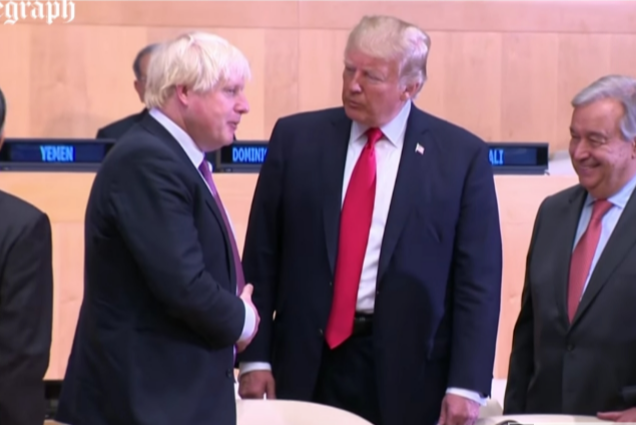 Days ahead of his first official state visit to the United Kingdom, President Donald Trump has spoken in favor of the pro-Brexit contender Boris Johnson as possible successor to Prime Minister Theresa May. The former British Foreign Secretary, Johnson, is an “excellent” choice to succeed May who is set to set down on June 7.

“I have actually studied it very hard. I know the different players,” he told the British newspaper The Sun. “But I think Boris would do a good job.”

On Monday, President Trump starts off his three-day visit of the UK which coincides with the 75th anniversary of the D-Day.

The US President spoke glowingly of the ex-Foreign Secretary in a world exclusive interview with The Sun ahead of his three-day state visit to London, starting on Monday. (…)

While stopping short of offering his full endorsement, Mr Trump told The Sun: “It’s something that I find very interesting.

“I actually have studied it very hard. I know the different players.

“But I think Boris would do a very good job. I think he would be excellent.”

The President added: “I like him. I have always liked him. I don’t know that he is going to be chosen, but I think he is a very good guy, a very talented person.

He has been very positive about me and our country.”

Though there are eleven candidates in the fray to replace Prime Minister May as the leader of the Conservative party, Johnson is widely regarded as the frontrunner.

The former UK Environment Minister and the prominent pro-Brexit campaigner, Michael Gove, is seen as his main rival for the post. The serving Foreign Secretary, Jeremy Hunt, and UK’s top Brexit negotiator with Brussels, Dominic Raab, are also regarded by pundits as potential replacements.

In a separate interview, Trump called on the UK to leave the European Union with or without a deal and told the  British government to send the Brexit party leader Nigel Farage to negotiate. “Don’t pay Brexit bill unless EU backs down,” London’s Sunday Times quoted him saying.

Farage’s Brexit party won the recent EU parliament election in the UK, comfortably beating May’s Conservatives and the Jeremy Corbyn-led Labour party. The newspaper reported the excerpts of the interview:

Donald Trump today calls on Britain to send Nigel Farage to negotiate with Brussels and pursue a no-deal Brexit if the EU refuses to give Britain what it wants.

In an interview with The Sunday Times ahead of his state visit to the UK this week, the American president said the next prime minister should refuse to pay the £39bn Brexit divorce bill and “walk away” if Brussels does not bow to Britain’s demands.

Trump said that it was not too late for Britain to follow his advice and “sue” the EU to give Britain greater “ammunition” in the talks.

Miserably failing at delivering the verdict of the June 2016 Brexit referendum, there are little signs that the May’s government will heed Trump’s advice.

“Isn’t it absolutely bizarre? Doesn’t it sum up why British politics needs to change? The small-minded pettiness,” Farage told the Daily Express. “I supported him publicly, I speak to him occasionally on the phone, but I was told it was not to happen,” he added.

Day’s ahead of the state visit, the Mayor of London, Sadiq Khan, attacked the U.S. President likening him to ‘a 20th-century fascist.’

President Donald Trump is just one of the most egregious examples of a growing global threat,” Khan wrote in the weekly The Observer. “The far right is on the rise around the world, threatening our hard-won rights and freedoms and the values that have defined our liberal, democratic societies for more than 70 years.”

Khan, who lobbied the government to open the UK borders to the refugees in 2015, has presided over a worsening crime situation in London eversince. “Knife crime has increased by 52 per cent, burglary by 17 per cent and robbery by 59 per cent. Last year there were 135 homicides – a 24 per cent increase since 2016 and the highest number for more than a decade,” The Sun reported earlier this week.

The Labour party leader Corbyn was boycotting the banquet at the Buckingham Palace in honour of President Trump.

Some MPs of his party were expected to “join protests against ‘racist and sexist’ US president,” The Indepedent reported. “Thousands of protesters are expected to throng the streets of the capital to voice their opposition to Trump, with a massive rally planned for Trafalgar Square on Tuesday,” the British newspaper added.

President Trumps remarks are a stinging blow to the UK political establishment still refusing to come to terms with the outcome of the EU election that saw an exodus of voters leaving the Britian’s main Conservative and Labour base in favor of Farage’s Brexit party. Unlike May, who openly campaigned for the UK to remain in the EU ahead of the 2016 referendum, Johnson, one of the lead campaigner for Britain leaving the bloc, has a much credible record when it comes to negotiating a Brexit deal with Brussels.

Khan is what you get when London is turned into Londonistan. He’s full of camel dung.

And I see that The Donald is continuing the glorious Obama tradition of interfering in another country’s elections. The nerve of that guy! Well in this case I say “You go guy!” London will occasionally elect some pretty silly mayors. Khan was preceded by Red Ken.

I forgot…. how many kilometers does one need to drive outside London to find England? It seems like a longer trip every time.

Watch it. John Cleese just got in big trouble for saying that London is no longer an English city.

and teh Baby Trump will make an appearance showing how intelligent, serious, and mature the anti-Trump protesters are
*SNORT*

Wow. DJT and Boris would establish an Axis of Inexplicable Hair which should leave Brussels, Paris, Berlin and all the other traditional centers of fashionable totalitarianism feeling pretty helpless.

Sadiq Khan is another example of why western countries should not allow Muslims to come to their countries.

May he be on the same plane crash as tlaib and omar – with the obamas piloting, and hillary clinton being the stewardess, and nancy pelosi flying in coach.

Sine say the other side of the M25 others say the North Circular.

London is a curious place. I’ve never lived somewhere were I’ve shouted at so many people in such a short amount of time AND also loved living in such a place because there is so much to do for young families 🙂

Watching the news here in NZ and it was refreshing listening to them tearing in to little Khan “what did you expect when you poke the bear” hahaha. Totally nit what I thought the media here in NZ would have said! Nice surprise.