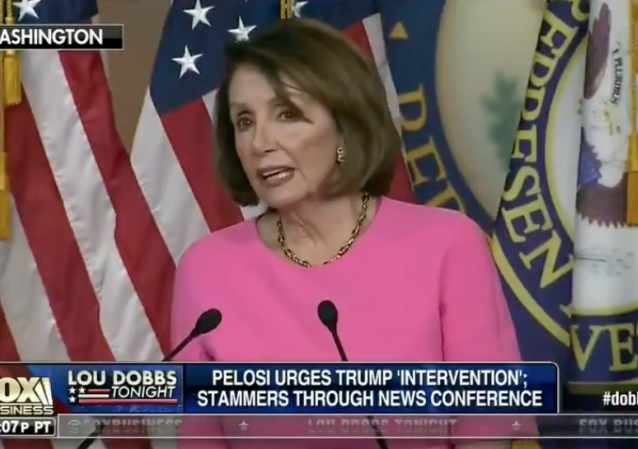 Remember when the media was supposed to function as the fourth estate, protecting the people from the government? It was great while it lasted. Now media, in this case The Daily Beast, is thrilled to announce they sought out a private citizen who posted a viral video portraying Speaker Nancy Pelosi in a not so flattering light.

The video, which is clearly doctored, slowed down Pelosi’s speech, making it sound as though she’s drunker than a skunk. And it’s funny. At least it is to those of us who’ve miraculously maintained a sense of humor in the Age of Outrage ALL the Things.

But why? How does it advance the story, what purpose does it serve to out someone with a decent sense of humor poking fun at our totally ridiculous mockworthy political state? It doesn’t. Yet here we are.

Facebook refused to remove the video, so good on them… kind of. Because according to The Daily Beast, Facebook is the one that confirmed which individual posted the video:

xxxx claims that his “drunk” commentary on an unaltered Pelosi video had no connection to the now-infamous fake clip that premiered less than 15 minutes later. “I wasn’t the individual who created that Pelosi video,” he insisted in a telephone interview.

It’s conceivable that someone else actually edited the clip. But a Facebook official, confirming a Daily Beast investigation, said the video was first posted on Politics WatchDog directly from xxxx’s personal Facebook account.

“Posted,” is important here. Per TDB report, Facebook confirmed the man guilty of posting a funny video did just that — posted it, or that the post originated from his personal user account. He claims he did not create it and also that he did not personally post the video, but that another page admin, a female, had done so. GREAT GET, GUYS.

Unfortunately for the doxxed dude, he is a “wrong thinker”:

A review of Brooks’ personal fan page reveals him as an avowed conservative and a proud member of Trump’s razor-thin African-American support base. A couple of Brooks’ Instagram posts feature misogyny.

The Daily Beast may have gone the extra mile to “expose” the man who created the video, but get a load of networks covered the issue. This is just one example, but they’re all the same.

This isn’t the first time TDB has done this. Anyone remember this gem?

Great work. You guys went and doxxed an African American blue collar worker and posted his picture on your website because he made an internet video you didn’t like. Way to lean into that whole enemy label https://t.co/ZPDBNh148a

I love the “Russian troll” cover here. “Hey we thought it was a Russian troll” literally no one thought that. Media using their bylines to go after and intimidate private citizens for internet videos they don’t like is literally enemy of the people shit.

So much for ‘speak truth to power’ I guess, that’s so passe. Nowadays, it’s protect Democrats and the status quo.

Or power against the people

Mr Poulsen’s address and phone number (and those of his editor) need to be immediately published.

Are you listening, 4chan?

My understanding is that Brooks is now sueing the daily beast.

Is there any doubt that the left is at war with their enemies?
Sociopaths destroy when they fail to control.

notamemberofanyorganizedpolicital in reply to TX-rifraph. | June 4, 2019 at 4:02 pm

Actually the Leftists and their “nations” have been at War with U.S. in World War 3 for several years now.

Well .. Main stream media is being run by the Deep State!

My God — just when you thought that the Leftist jackboots couldn’t stoop any lower with their infantile, sanctimonious totalitarianism.

Of course, the “Enemy of the State,” here, committed the additional act of “treason” inasmuch as he is a black Trump supporter. This, in addition to mocking Her Imperial Majesty, Queen Pelosi.

I forgot to add “vindictive” to my characterization of contemporary Leftists’ brand of totalitarianism.

Claude Taylor is a “liberal provocateur” and the genius behind the MadDog PAC, which raises money to put up anti-Trump billboards in the middle of nowhere. And on Monday, as President Trump was arriving for his state visit to England, he shared this video of Trump’s arrival with the audio swapped out:

It doesn’t protect them from libel, though, and a couple of their claims about him seem to be actionable libel if he can show they aren’t true and tdb failed to do their due diligence.

If they lied, then yes. But the post doesn’t say anything about that, it just says they doxxed him, and that is perfectly legal.

Practice your goose-stepping, you little brownshirt. You suck at it.

There was never such a time. We don’t have estates in America. And not one in twenty reporters who arrogantly call themselves a fourth estate, can name the first three.

It’s the same arrogance that leads them to claim the first amendment’s reference to “the freedom of speech and of the press” refers to them, and gives them some sort of special status or constitutional role. It doesn’t.

Reporting has always been a disreputable trade, and nothing has changed.

The petty left strikes again… video is no different than the trump ballon in england, in todays media driven political scene, a video meme is par for the course

These are the same journalists who’d rather go to prison than expose a democrat spy.