The reason she has been singled out is that she works at a Trump property, reflecting a media eagerness to take down anyone associated, even remotely, with Trump. 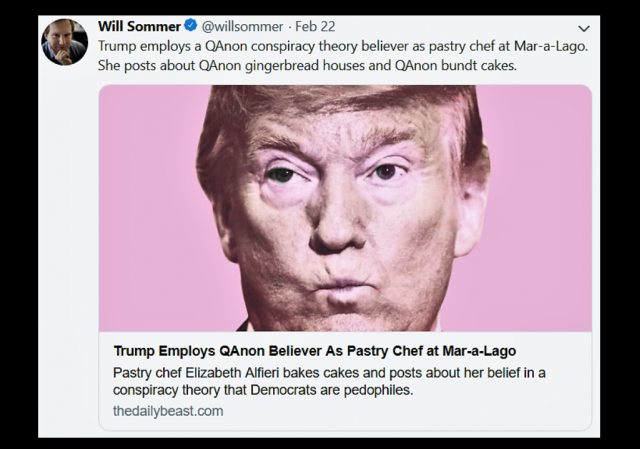 The Daily Beast is the 342nd most trafficked website in the U.S., out of tens of thousands, according to Alexa.com.

Under Editor-in-Chief Noah Shachtman, The Daily Beast has aggressively joined the anti-Trump “Scoop” wars, sometimes with actual reporting, other times in Gawker-style clickbait, leading Recode to ask last November, Is the Daily Beast the new Gawker?

If Gawker-style is The Daily Beast’s goal, they certainly accomplished it with an article about a pastry chef at Mar-a-Lago who posted QAnon theories on her personal social media. QAnon is a crazy conspiracy theory that has made its way around social media.

The pastry chef story started at a newsletter published by someone whose livelihood is monitoring Trump’s Washington, D.C. hotel. Had the story just been in the newsletter, it would not have spread very far. But The Daily Beast author Will Sommer decided to promote it to The Daily Beast’s large platform.

The original headline didn’t contain the pastry chef’s name, but it was updated to add her name: 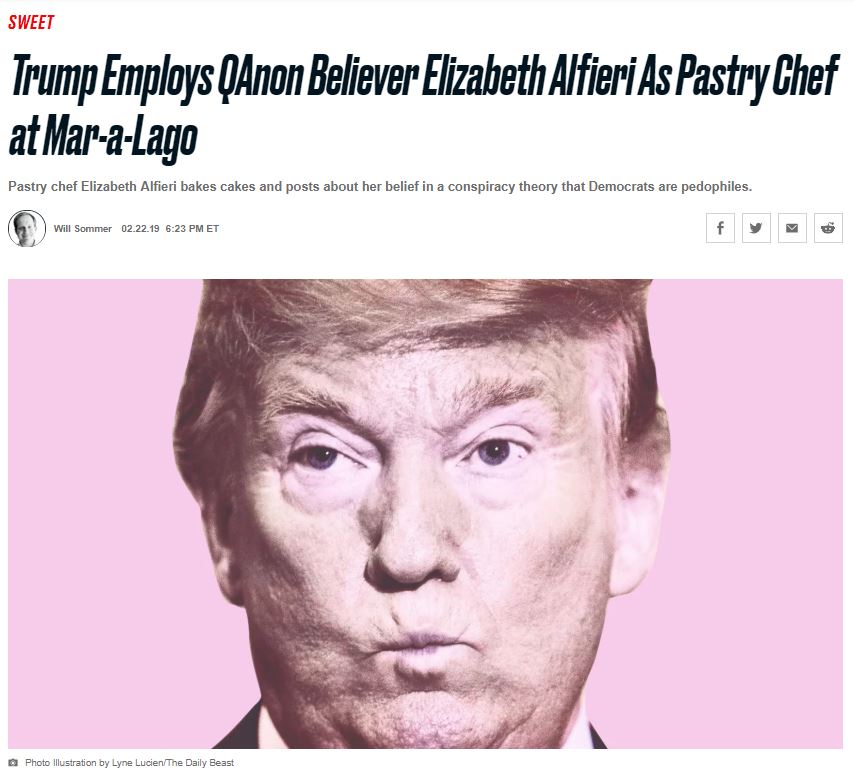 The article was promoted by Shachtman and author Will Sommer on Twitter, exposing the pastry chef’s name to people who might not otherwise go to The Daily Beast website. 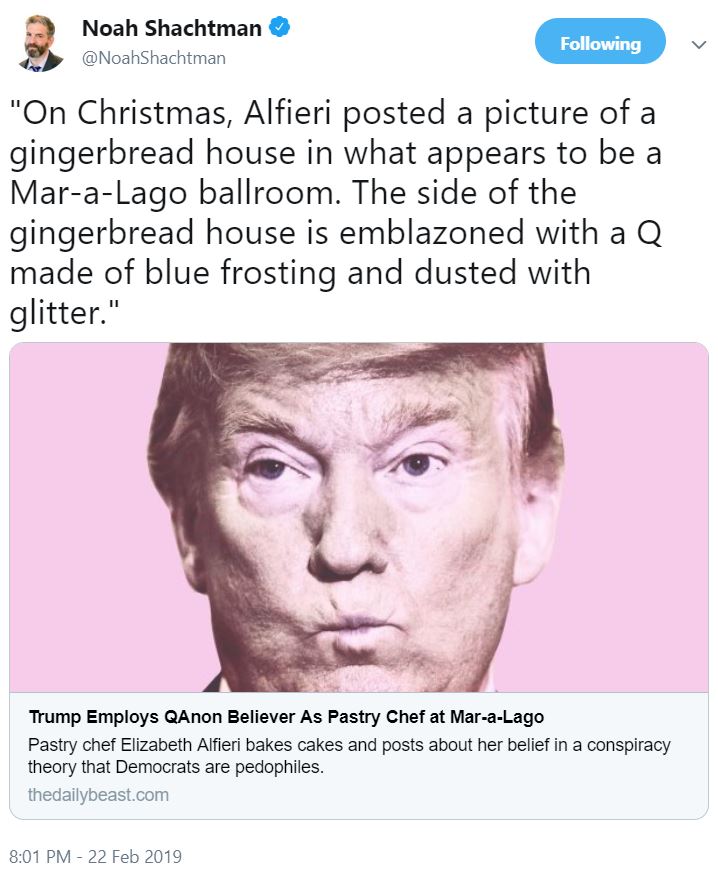 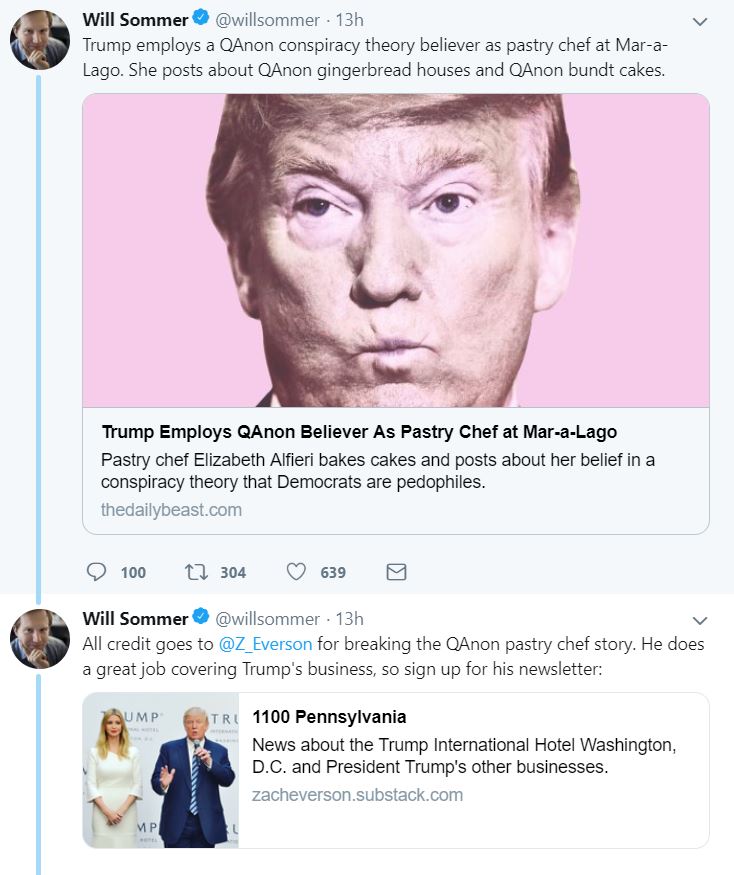 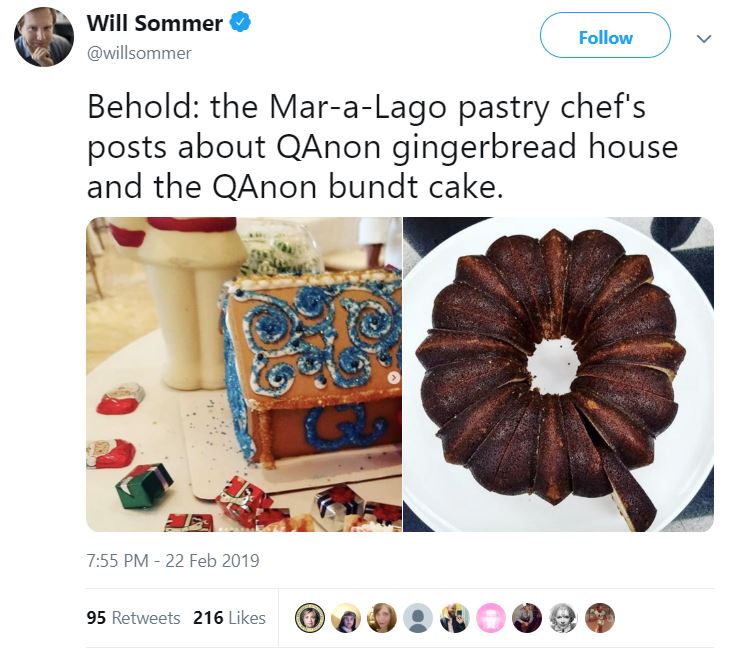 The story now has been picked up by Rolling Stone and shared by an MSNBC producer with half a million followers.

Nothing in the story indicates she used her politics to harass or intimidate co-workers or subordinates. She simply posted her political conspiracy theories on her personal social media accounts, which is a lot less than hundreds of blue-check-mark journalists  and anti-Trump nutters do every day on Twitter with their Russia collusion conspiracy theories.

The ONLY reason she has been singled out by The Daily Beast is that she works at a Trump property. That’s it. It’s not about the pastry chef, it’s about media hate of Trump and an eagerness to take down anyone associated, even remotely, with Trump.

Yet that pastry chef’s name, image and work details now are exposed to millions of readers of The Daily Beast for one reason only — she works at a Trump property.

What’s next for The Daily Beast? A deep dive into the personal political views of Mar-a-Lago groundskeepers, bellhops and janitors?

How about we leave low-level employees, who have not joined the political battle, alone?

The reaction to The Daily Beast has been harsh. You could say conservatives “pounced” and seized. Look at the “ratio” and scroll through the tweet replies: 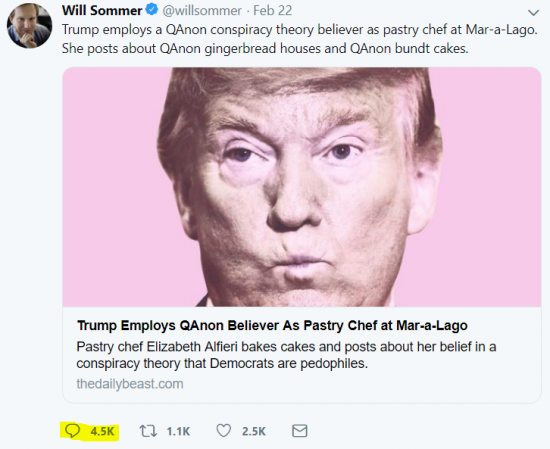 Here are some reactions, including ours:

What an abuse by a large media organization, going after a pastry chef with some wacky ideas just because the person works at a Trump property @NoahShachtman https://t.co/ED5eo5gBVB

For its next groundbreaking SCOOP, @thedailybeast @willsommer @NoahShachtman are going to expose the politics of Mar-a-Lago groundskeepers, bellhops, and janitors

This is why people hate the press.

She's a freaking pastry chef that happens to work at a Trump property. How is it remotely alright for a major publication to go after her because she believes some dumb conspiracy? https://t.co/ZE87koiztR

A whole media-created mob to try to get a freaking pastry chef fired.

The pathetic thing is that most mainstream journalists know this is wrong, but refuse to call out their colleagues. pic.twitter.com/k9mlkgVTEH

Seriously?
We are attacking pastry chef as if a pastry chef's political stuff is newsworthy?
Y'all have lost your damn minds https://t.co/q1kYnWyDm9

This woman is a pastry chef. She has zero power and zero impact on public policy. But because she’s eccentric and believes some wild conspiracy theories, Will Sommer decided to ruin her life and throw her to the mob. And they wonder why we hate them. https://t.co/wvcLcqXesA

Stop trying to act like you're defending her honor. People are pointing out that she's a pastry chef not to mock or demean her, but to mock *you* for acting like you did some major, important exposé on someone who has no policy-making role or power within the government.

How many public school teachers believe Bush had a role in causing 9/11? Should we name and shame them? No, of course not — but there’s a better case there than a pastry chef. https://t.co/abyKWhTkCB

It’s called a scoop because that’s what you use to get rid of it.

daily beast been fixated on this qanon for long time
https://www.thedailybeast.com/what-is-qanon-the-craziest-theory-of-the-trump-era-explained
one example

At least I’ve fulfilled my desire to learn one new thing every day. Never heard of QAnon before this. Now I can promptly forget about it until it comes to my attention again.

Wow! This is the first you’ve heard of Qanon? Supposedly an insider in the Trump administration. Makes cryptic Nostradamus like posts, and the 4chans or 8chans or whatever go about interpreting them for us. Pretty fascinating stuff. Or entertaining. Or both….

I’m not convinced Qanon is a real person (or group of people), nor am I convinced he’s a Larper. If he is for real, a pastry chef at Mar-a-Lago likely know him (or them). Without knowing it.

Sounds like a “wake-up call”—maybe he should hire more.

I looked it up… It sounded familiar and Wiki helped me out. From the opening sentence: QAnon “…is a far-right conspiracy theory detailing a supposed secret plot by an alleged “deep state” against U.S. President Donald Trump and his supporters.”

OK. It claims it started in 2017. As I recall, there has been a lot of info discovered, and admitted to, and supported by evidence that there are people deep in Justice, FBI, among others who work diligently to derail anything done by the Administration deemed positive. Well its not so “secret” today, and the idea of “supposedly” appears out-of-place in the description. Most people who pay attention to any information source beyond the MSM know this “deep state” is there, but maybe did not that they were part of a group. 🙂

So there, I saved some of you some Google time. Its my Good Deed for today.

So where’s the conspiracy theory?

On Wikipedia, everthing to the right of Karl Marx is “far right,” and using Google is also a good way to be misinformed. Just sayin’!

“most mainstream journalists know this is wrong”

I would dispute this assertion.

Thanks to the Daily Beast in having the Streisand Effect promote the conspiracy theory they hate.

What is a QAnon?

Did they even taste the bundt cake before writing this?

“QAnon is a crazy conspiracy theory that has made its way around social media.”

Tye writer is parroting DailyBeastjunk himself.

Because everyone knows there are no, nor have there ever been, true conspiracies in the real world. Anyone who speaks of conspiracy is a nut. BTW, crime doesn’t pay either.

No one has yet mentioned where to find the cryptic posts
https://www.qanonposts.io/

Have fun diving into the deep end.

And here’s ONE of the many people interpreting the posts for us:
https://threadreaderapp.com/user/prayingmedic

Oh, and threadreaderapp, which links twitter feeds, is a good place to follow some people if you’re not actually on twitter. Also a good way to see what the crazies are thinking if you once in a while glance at the main page and randomly pick some of the featured feeds. I do look at least one liberal feed daily, and some of these people aren’t living in the same dimension as normal people. For example: https://threadreaderapp.com/thread/1099416222154801152.html

Although some of the regular commenters here may totally agree with this thread- and you know who they are.

Next week: all your base are belong to us. The real story.

Perhaps it is just the LBTQ???? people who are mad that an unknown has culturally appropriated their beloved “Q.”

I think the left just hates pastry chefs in general because they are the reason so many on the left are overweight.

How many public school teachers believe Bush had a role in causing 9/11? Should we name and shame them? No, of course not

Yes, we should. But not lunch ladies, bus drivers, or secretaries.

Death squads are next. You’ll see.

The lunatics in the msm have been so far out of this world with their lies it’s not surprising that folks believe in QAnon or any other conspiracy theory.
No one in their right mind would have ever put down a nickel bet on 2016 presidential race being between PDJT and the evil witch (being nice for a change when referring to her) and that the result would be a President Trump.

I see a promotion to Executive Pastry Chef or even a share in a restaurant in someone’s future. Trump had better give her a raise if he wants to keep her, and she earned it.