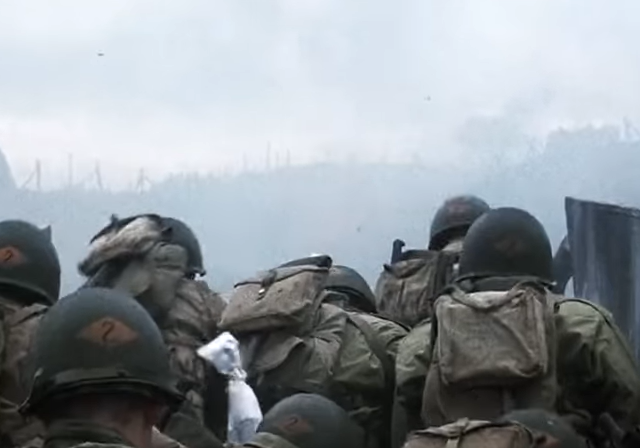 Clouds hung low over the cold summer beaches of Normandy on the morning of June 6th, 1944. The French countryside had been subjected to a night of heavy bombing by the Army Airforce and the US Navy but the vital bunkers and artillery emplacements protecting the beaches had hardly been scratched. The clouds had protected them. This would become quite unfortunate for the first waves of soldiers who would find themselves walking right into them.

What followed was the largest invasion in human history as over 100,000 Americans, British, Canadian, Polish and French troops stormed five beaches in a first desperate attempt to build a beachhead for the Allied invasion of Nazi Occupied Europe. Over the course of that day, 9000 young men would be fed into a wall of machine gun fire that they would never return from.

Many drowned before they even reached the beaches, sinking under the ocean under the weight of their gear. Most died in those first waves on Omaha beach where the flak become so heavy that the supporting naval ships were forced to near beach themselves and fire point-blank at the German encampments to break the stalemate. By the end of the day, the beaches were lined with the bodies of the dead but the allies had triumphed.

Today, June 6th, 2019 marks the 75th anniversary of the invasion. There are very few veteran survivors of the second world war living today as those that do survive today are in their 90s. To the men who served during the invasion and subsequently conquered Europe, we owe them a debt of gratitude that cannot be repaid. It was with their honor, blood, and precious life that the threat of totalitarianism was broken in Europe.

As my father once said to me, all good war stories are anti-war stories. In that sense, Saving Private Ryan is the quintessential great war story and a great film to revisit on the anniversary of D-Day. If Saving Private Ryan is about anything it’s about the utter cost of war. The film’s central story of a squad of Rangers going on a special mission to rescue a lone paratrooper so that he can be sent home only for the entire squad to get wiped out during the mission is a bleak story.

The movie portrays the utter moral chaos of war in all of its horrific glory. Heroes are punished for their good actions. Characters celebrate minor victories seconds before their deaths. In the end, in the words of the film, everyone is just left to burn. Even the movie’s moral equation places the burden of survival on the survivors. By the end of the movie, nearly everyone introduced in the film has died just to keep one soldier alive long enough to get him home. It’s a depressing loss that leaves Private Ryan to question the value of his life over all those who died for him.

Tom Hank’s leading role as Jon Miller calls back to John Wayne’s famous performance in Sands of Iwo Jima as the stern patriarchal sergeant leading his grumpy soldiers heroically into battle. Hanks subverts that archetype by subtly implying just how shaken and disturbed he is by the events surrounding him. He’s literally so shaken by what he sees that his hand starts shaking uncontrollably at odd times. It’s a sign that the facade is breaking underneath. Even the most iron-willed and strong men are broken by war.

Just the opening sequence alone on Omaha beach is near sacrosanct as a visualization of the utter horror of war. The images and sounds of men being chewed by machine gun fire, crying for their mothers is painful stuff even two decades after the film’s premiere.

There are more than a few excellent films about World War II. Of all of them though, none put the actual life experience of being a soldier so front and center as this film did. It’s a reminder that war comes at a cost paid in life and blood that we subject our youngest, most impressionable members of society to in the name of freedom. As the saying goes, freedom isn’t free. Saving Private Ryan is merely reminding us what that cost is.

“Back then the NAZIs were real, and heroism wasn’t called ‘toxic masculinity'”.

…illustrating why my liberal friends hate that cartoon strip.

Another recommended film about D-Day is the Longest Day. While if does not show the blood and gore of Private Ryan, it does show a fairly excellent representation of the command dscisions of both sides. It also shows the dedication of the individual solider to get the thing over with.

My favorite from that movie is watching a German pillbox commander do a final scan of the horizon. As a fog lifts he sees a wall-of-steel coming at him, “The invasion!”

I don’t know if it qualifies as a “film” or not, but the series “Band of Brothers” is quite good. Documenting a specific company of a Parachute Infantry Regiment, it brings out a lot of emotions mentioned here.

The scenes of the loading of the planes for the D-Day jump and the flight over was very emotional. In one of the interviews with a surviving veteran, the question was put to him about how can you just do that (jump into combat) and his response was along the lines of “we figured we were dead men and were just waiting on how it would happen…” Greatest Generation for sure.

My father was there on the beach and my father in law was a Ranger, he climbed that wall with the first group, only 90 made it , nearly 300 started

We will never see men like that, in the numbers, 37 million went to volunteer the day after Pearl Harbor

Yes we have brave men and women who, IMHO have been misused in most part sincle 9/11, but as a nation, I don’t think our millennials and illegals are up to it

They were are Greatest Generation, they and the soldiers of our Civil War

My uncle, at the time a naive and unworldly country lad, and with only minimal infantry training stateside, landed among the first waves. He never spoke about that day. Getting wounded and shipped home just prior to the breakout at Ardennes probably saved his live. Awarded two bronze stars. He lived a long and satisfying life.

My pop would’ve likely been drafted for service in the Pacific if Truman hadn’t dropped the bomb.

“…if Truman hadn’t dropped the bomb.”

One of the best decisions a president has ever made.