The first key hires for our research, investigative and education team. 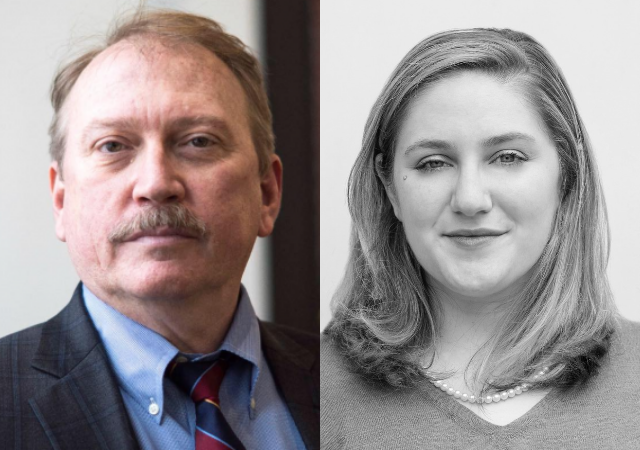 It has been a busy few months here since launching the Legal Insurrection Foundation in early March 2019.

We have continued to put the systems in place to effectuate our mission to put together a small but effective research, investigative and educational team. We have a special focus on intersectionality and the red-green alliance, the cross-over of anti-capitalism, anti-Americanism and anti-Zionism that motivates so much of the activism ripping at the fabric of our freedoms.

Our first major project has been the Gibson’s Bakery versus Oberlin College dispute and trial, where we were the only national news organization with a reporter in the courtroom every single day of trial. This case contained many of the elements on which we focus, so it was a good fit for our mission. Our extensive coverage and announcement of the verdict has swept much of the internet (more on that later).

I’m happy to announce our first new hires at the Foundation, Prof. Gabriel Noah Brahm and Samantha Mandeles. More on them below. While you will see them from time to time on this website, they will devote substantial time to the background research and investigation that doesn’t follow the news cycle, but hopefully will make a difference.

I’ve known of Gabe for a long time. He’s one of the major scholars in the field of countering the anti-Israel, anti-Semitic, and intersectional ideologies sweeping college campuses and now infiltrating corporations and politics. He has edited and authored many of the seminal volumes on these issues.

I first learned of Samantha when she was still a student at Hampshire College, and an almost solo pro-Israel voice standing up against the earliest manifestations of student government BDS resolutions. I then met her when she worked at CAMERA, and we appeared on a panel together regarding BDS. She has a deep understanding of the red-green alliance and the influence of Islamist groups.

I’m excited to have them join us. Here are Gabe and Samantha’s formal bios and titles.

Professor Gabriel Noah Brahm, Ph.D., is the Legal Insurrection Foundation’s Senior Research Scholar. He helped found and currently serves as Director of the Center for Academic and Intellectual Freedom at Northern Michigan University, where he teaches courses in world literature and philosophical anthropology, and Senior Research Fellow at University of Haifa’s Herzl Institute for the Study of Zionism. He has been a visiting professor at the Hebrew University of Jerusalem, a visiting researcher at Tel Aviv’s Institute for National Security Studies, and a visiting scholar at the United States Holocaust Memorial Museum’s Center for Advanced Holocaust Studies, where he helped draft the 2010 white paper, “Antisemitism in Higher Education.” His recent published works include The Case Against Academic Boycotts of Israel (coedited with Cary Nelson)(2014) and “Intersectionality,” Israel Studies, 24.2:157-170 (Summer 2019). A more complete listing of Prof. Brahm’s background is available at his faculty page.

Samantha Rose Mandeles joined Legal Insurrection Foundation after serving as an analyst and coordinator for the Middle East Forum, where she focused on researching Islamist networks in the United States. Prior to that, she was a senior campus coordinator for the Committee for Accuracy in Middle East Reporting in America, and Editor-in-Chief of its CAMERA-on-Campus website. She earned her M.A in Counter-terrorism and Homeland Security from the Interdisciplinary Center in Herzliya, Israel, and her B.A. from Hampshire College. Her writings have been published in PJ Media, Daily Wire, Daily Caller, Algemeiner, JNS, American Spectator, among others, and she is an experienced public speaker on issues relating to Israel, Islamism, and antisemitism.

Legal Insurrection Foundation is an IRS-approved 501(c)(3) tax-exempt organization, Donations are tax deductible to the full extent the law permits. You can donate HERE or through the link below.

Wonderful. It’s important that there will be voices, on this cluster of topics, that aren’t with the crazies.

Congrats, Prof.
Thank you for the site and all your crew.

Wonderful. You might want to have some contributing members. I suggest Clarice Feldman (American Thinker) and John Soloman (The Hill).

That is great and I have great respect for Professor Jacobson and the yeoman’s work that he is doing.

I am, however, curious why my computer freezes up so often while I am on this site.

If there is no explanation I’m willing to believe that it is just a coincidence.

“We have continued to put the systems in place to effectuate our mission to put together a small but effective research, investigative and educational team. We have a special focus on intersectionality and the red-green alliance, the cross-over of anti-capitalism, anti-Americanism and anti-Zionism that motivates so much of the activism ripping at the fabric of our freedoms”

I sincerely hope this paragraph was a send up of the SWJs and was not meant seriously.

I am so tired of hearing loudly what I should think presented as news.

I have come to Professor Jacobson for some time now to find out what is happening to the Law that governs me in the United States.

I most sincerely look forward to the fine Professor’s vision growing in the future.

You will know you have arrived when you trigger Zachriel or Rags.

Zachriel is the better behaved (it’s a they)

Kudos, thank you, and best of luck in this project! Your work is very much appreciated!

Since your Oberlin commentary, my top 3 sites on the internet has now become my top 4. Well done!

I started following this blog during the Trayvon Martin trial. I have found it to be my top choice since then.

Even handed, good attribution of source material, and (while there are typos) the arguments are well-constructed.

Welcome to the good fight, Warriors.

The Warriors win in the end.

Welcome to the new additions to the LI team!

I very much look forward to reading their insights and commentary. Sorely-needed, in this dark time of virulent, ignorant and self-congratulatory Jew-hatred, presented under the fig leaf of anti-Israel venom and slander.

The contemptible moral bankruptcy and stupidity that single out the world’s only Jewish state for the most vile slander, for Jews having the temerity to resist Islamic supremacism, totalitarianism, belligerence, and genocidal aspirations, must be confronted, condemned and called out, wherever it occurs.

So, too, must the utterly contrived mythology of Muslim/Arab “Palestinian” victimhood and attendant narratives be rejected, wholesale.

There goes the neighborhood…