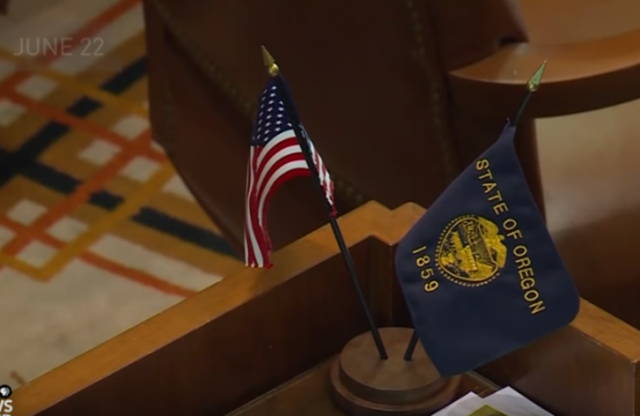 Legal Insurrection readers will note that in my coverage of California, virtue-signaling urban priorities routinely triumph over sensible and important rural ones.

The same is true in Oregon. However, the difference is that 11 of the Republican state senators representing the redder areas of that state are taking a stand.

There are still 11 Oregon Republican state senators missing, having fled Salem in protest of a greenhouse gas emissions cap-and-trade bill. The legislators say such a bill would harm Oregonians, especially those in industries such as logging.

Gov. Kate Brown has authorized the Oregon State Police, whose jurisdiction ends at the state border, to locate the absent senators and return them to the Capitol building.

It’s believed that most of the 11 Republicans have fled the state, possibly to Idaho.

Oregon Senate minority leader Herman Baertschiger sounds as if his caucus is prepared to outlast the progressives’ outrageous outrage at their protest.

Another great example of the Democrats complete lack of understanding of rural Oregonians. My caucus and I will stay out of Oregon as long as it takes to represent our constituents. #CapKillsJobs #hb2020 #Oregon11 https://t.co/3GDCJlENxn

The Democrat governor of Oregon ordered state troopers to find the 11 runaway senators and haul them back to the capitol.

Gov. Kate Brown authorized the state police to search for the senators and to bring them back. In a statement Thursday, she said that the missing Senators had decided to “abandon their duty.”

“It is absolutely unacceptable that the senate Republicans would turn their back on their constituents who they are honor-bound to represent here in this building,” Brown said. “They need to return and do the jobs they were elected to do.”

The state police said in a statement that Brown’s order was “consistent with the provisions in the Oregon constitution,” and that the police are “fully committed to executing” her order.

In a fascinating review of Brown’s political history, it turns out that she supported a walkout by Oregon Democrats in 2001.

In 2001, Gov. Kate Brown, then OR’s Senate Democratic Leader, said she supported House Democrats in not showing up to floor sessions to oppose a measure Republicans, the majority at the time, backed. AP article cited by state Sen. Brian Boquist: https://t.co/lsdzfaucMB #LiveOnK2 pic.twitter.com/k1LiNgwbtM

At the time, Democrats in the state House staged a walkout to protest efforts by the then-majority House Republicans to redraw Oregon’s legislative districts.

A copy of the article provided by Boquist quotes then-Senate Democratic Leader Kate Brown calling the actions of House Democrats “very appropriate under the circumstances.”

Baertschiger and his caucus are right in their worries about Cap and Trade if the California version is any indication. Monies from the Golden State’s program, which are supposed to be used to prevent “global warming,” are now being diverted to other projects.

The Oregon Senate Minority Leader indicated that their action was the last resort to get the Democrats to compromise on the green justice measure.

“We can re-educate them. They can get new green jobs,” was the response from his Democratic colleagues to concerns workers may lose their jobs, according to Baertschiger.

“You’re not going to take a logger or a rancher and say well you no longer can do your occupation anymore and give them a green new job,” Baertschiger said. “That’s not going to fly.”

Baertschiger said he was not proud his caucus had to resort to fleeing the capitol to stop the bill, but he and the 11 other senators viewed it as the “nuclear option” after the governor and their Democratic colleagues proved unwilling to reform the legislation.

Because of the move by the Republicans, the state party’s leader has been receiving death threats.

The Benton County Sheriff is investigating threats made against Oregon Republican Party chairman Bill Currier, adding to the tension surrounding the standoff between the Democratic governor and runaway Republicans in the state Senate.

Mr. Currier and Becky Currier, his wife, received a total of three messages Sunday morning on their cellphones from what sounded like the same unidentified man threatening their family, according to audio recordings provided to The Washington Times.

Another message said: “F– you. What if something happens to your family? What if somebody gets hurt? What are you going to do then?”

The Oregon Republicans would prefer that Cap and Trade rules be put in front of the state’s citizens in a vote, instead of thrust upon them by legislative action. If the 11 Republicans remain missing through the end of the week, it is likely a special summer session will be called to deal with the matter.

While I support the CAUSE they are fighting for, this is idiotic.

It was idiotic when the Democrats tried to do it to Walker in Wisconsin, and its still idiotic when Republicans do it.

Suck it up and accept that they’re giving voters what they THINK they want and stop trying to save them from themselves.

Let them feel the pain and then maybe repeal it if you can actually reach them to regain control.

The people likely to feel the most pain are not likely to be the ones supporting this. An excellent example of the tyranny of the majority.

I think that cap and trade will lead to a massive outflow of capital from developed countries to 3rd world countries. If we are going to have cap and trade, any country selling their carbon credits should have any aid reduced by twice the value of any revenue they receive.

notamemberofanyorganizedpolicital in reply to Olinser. | June 28, 2019 at 2:29 pm

They’re not the only ones fleeing that insane, un-scientific fairy tale,

“French President Emmanuel Macron arrived in Japan for the G-20 summit with a threat; include a reference to the 2015 Paris Climate Accord in the group’s final communique, or France won’t sign anything, according to Bloomberg.

“If we are not able to get around a table and defend the climate, then France won’t go along with it,” he said. “It’s that simple.”

Then, his aides began to backpedal – with one suggesting that it was impossible to discuss hypotheticals, and another saying it wasn’t a threat – rather, Macron was simply indicating France’s priorities.”

Once either party pulls off a bit of chicanery, it becomes part of the general bag of tricks of American politics. If one party can get away with it, it’s hard to rationalize a prohibition on the other party doing it as well.

Methinks you missed the point: the constituents of the Republican voters do NOT want cap and trade, and giving the Communist supermajority in Oregon leeway to do that would have been irresponsible and likely irreversible.

One of the GOP complaints is they put some kind of “emergency” provision preventing voters from a referendum in 2020.

That is why we are headed to a civil war. We try democracy, but if the vote turns out “wrong” (CA voted to ban aid to illegals, and to ban gay marriage), a Judge overturns it, but if they vote “right”, sometimes after several attempts, often with manipulation like special elections in vacation season, it is “the will of the people” and they will never be allowed to vote again.

What are the loggers and farmers afraid of….learning to Code? {sarcasm intended}

who they are honor-bound to represent here in this building

Some I doubt that “in this building” is part of their oath of office.

There was some kind of prevision put in PREVENTING it from going on the 2020 ballot where it might have been repealed.

It also happened in Wisconsin when Scott Walker wanted to weaken the power of Unions. The GOP has realized they have to adopt the tactics of their enemies.

Beyond that, the problem is the geographically small blue urbaan areas writing laws on the “environment”, guns, etc. that are tyrannical to the (now) minority who live in rural areas. This is a form of “Jim Crow”. Too much Democracy, and the 51% becomes slave masters of the 49%.

Precisely. After Governor Brown’s ‘give driver’s licenses to illegal aliens’ bill got overturned by the voters, she went ballistic. Started using the State of Emergency waiver to avoid having her precious socjus engineering bills face the electorate.

Can’t say I’m ENTIRELY pleased with how this has turned out, but it amuses me greatly to watch the Dems try to figure out how to handle this.

Cities are classic “behavior sinks” according to Thomas Jefferson.

“When we get piled upon one another in large cities, as in Europe, we shall become as corrupt as Europe.” – Thomas Jefferson

Here is how this works.

The majority in the Legislature is poised to pass a bill which will catastrophically effect a significant portion the citizenry of the state. Unable to get the majority to compromise, the minority members leave, denying the body a quorum. Now, it is not against the law to refuse to attend any vote of the legislature. It is possible that this type of behavior constitutes nonfeasence in office. For a LE office to forcibly take a legislature into custody, transport them to the state capitol and force them into the chamber, they have to have a court order. The other alternative is to impeach the missing members, for nonfeasence, and replace them with other members. The state has NO power or authority to FORCE Legislators to attend any vote.

I lived in Oregon for 17 years and was involved in grass roots efforts the last 6 years. My sources there say that the Republican senators will come back in dems would remove the emergency provision. When declared an emergency, it prohibits the public referendum on the matter. This is no emergency! This is a democrat trick NO DIFFERENT than the republicans leaving the state. But like always, media focuses on the republicans…

I have no confidence that the Dems will remove the emergency provision, only to slap it back in at the last second before the bill comes to a vote. The Dems have proven they will not negotiate in good faith, and (censoring) over the Republicans in that fashion will please their raving loony base to no end.

Another great example of the Democrats complete lack of understanding of rural Oregonians.
— Herman Baertschiger (@SenBaertschiger) June 25, 2019
————————————–
Pretty lightweight of saying the dems hate rural America and the true values they have of being an American. They understand, they also want them on their knees voting for the fascism of the left.
Beware of liberals posing as Americans. It can be harmful to your health.

By any means necessary – avoiding tyranny.

Oregon is preview of coming attractions to other far left wacko states, and at least partial federal.

Best to divorce the union now before the shooting starts, which it will.