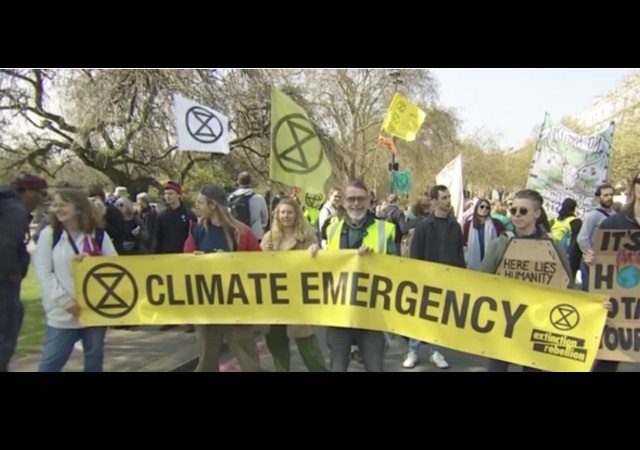 CNN published a story on Sunday about BirthStrikers, people who have chosen not to reproduce because of climate change. One woman justified her decision because of a future “ecological nightmare.”

BirthStrikers have chosen not to bring children into the world out of fear their children might inherit “a world worse than ours.”

After all, the UN International Panel on Climate Change warned the world “only has 11 years to prevent catastrophic climate change.”

The BirthStrikers have decided they can’t bring children into a world where scientists predict climate change will bring bigger wildfires, more droughts, and food shortages for millions of people. https://t.co/Rm5UTsYhsJ

I feel the same way about going to Home and Garden Expos. I will not attend another one while I know that there will be booths with knives and massage chairs being sold.

Glad they are helping. If enough of you do this my taxes won’t need to be raided.

Leftists causing leftists to be extinct.

Well, there’s a self eradicating problem if I ever saw one.

Leftisits take the losing side of natural selection once again. Shocking.

Now if they would also stop voting as well…..

voting and campaigning use fossil fuels!

Illegals and Muslims will be happy to replace them and greatly lower the average IQ of humanity.

Many of them don’t. They turn their ballots over to the local Soviet (D’Rat operatives) to have them take care of that pesky voting stuff. That’s how it works in California.

Wasn’t this going to be the end result of the sex strike anyway?

Over the centuries, there have been a lot of people who have decided never to have children for any number of reasons.

All of us reading this are descended from the people who thought they were full of crap.

Good. These are the last people who should be around children.

“The future belongs to those who show up for it.”
— Mark Steyn

This is the result of Malthusian overpopulation propaganda in our high schools, plus a fat dose of selfishness.

There has been a deliberate effort to push the birth rate down in civilized countries, by teaching the kids we are on the brink of ecological disaster, and also, the world is a rotten place, anyway.

The next step was to demand the importation of millions of military-age men to replace the missing children who would have been young adults, by now.

Think of it as evolution in action.
— Niven

That has been one of my favoriate quotes for decades.

They should avoid sex, which carries the risk of child conception.

This is why I am torn on making abortion illegal. On one hand I strongly oppose abortion, but on the other hand if far more Liberals than Conservatives have abortions, then Darwin wins.

Darwin is proved a genius yet again.

These are very sick people who need lots of mental help. So it is just as well they have chosen not to reproduce.