Now, a new set of experts are reporting that the climate change apocalypse will start by 2050! 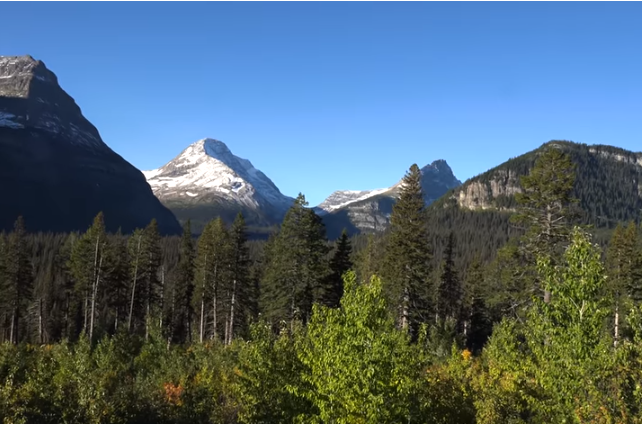 Back at the height of the global warming craze in 2009, before leftists rebranded it “climate change,” supposed experts predicted all the glaciers in Montana would disappear by 2020.

Daniel Fagre, a U.S. Geological Survey ecologist, warns that glaciers may be melting at an even faster rate than originally predicted, according to National Geographic. Fagre has been conducting research in the national park since the early 1980s.

In 2003, USGS garnered headlines by projecting a disappearance date of 2030 for the Montana glaciers. That was based on studies using 1992 temperature predictions from the U.N.’s Intergovernmental Panel on Climate Change.

Fagre’s current research reveals that temperatures in Glacier National Park have risen higher than was predicted in 1992. The Montana glaciers are now expected to be gone by 2020. And that will dramatically impact the park’s rare and sensitive plants and animals.

The brochures, dioramas, and signage in the parks showcased the dire predictions of glacial extinction by 2020. Now, ten years after the doom-and-gloom prediction came out to the public, the change order appears to have been given.

Officials at Glacier National Park (GNP) have begun quietly removing and altering signs and government literature which told visitors that the Park’s glaciers were all expected to disappear by either 2020 or 2030.

In recent years the National Park Service prominently featured brochures, signs and films which boldly proclaimed that all glaciers at GNP were melting away rapidly. But now officials at GNP seem to be scrambling to hide or replace their previous hysterical claims while avoiding any notice to the public that the claims were inaccurate. Teams from Lysander Spooner University visiting the Park each September have noted that GNP’s most famous glaciers such as the Grinnell Glacier and the Jackson Glacier appear to have been growing—not shrinking—since about 2010. (The Jackson Glacier—easily seen from the Going-To-The-Sun Highway—may have grown as much as 25% or more over the past decade.)

…Last year the Park Service quietly removed its two large steel trash cans at the Many Glacier Hotel which depicted “before and after” engravings of the Grinnell Glacier in 1910 and 2009. The steel carvings indicated that the Glacier had shrunk significantly between the two dates.

Interestingly, it appears that the new consensus by climate “experts” is that the grand global apocalypse will happen in 2050.

A chilling Australian policy paper outlining a doomsday scenario for humans if we don’t start dealing with climate change suggests that by 2050, we could see irreversible damage to global climate systems resulting in a world of chaos where political panic is the norm and we are on a path facing the end of civilization.

The worst thing about it, experts say, is that it’s actually a fairly calm and rational look at just how bad things could get — and how quickly — if humans don’t stop emitting greenhouse gases into the environment.

The scenarios “don’t seem that far-fetched to me. I don’t think there’s anything too crazy about them,” said Adam Sobel, a professor of applied physics and mathematics at Columbia University in New York City who studies atmospheric and climate dynamics.

The paper was written by an independent think tank in Australia called Breakthrough National Centre for Climate Restoration. It offers a scenario for 2050 in a world where humans didn’t lower carbon emissions enough to keep the global temperature from rising.

Expect the breathless coverage of the impending “climate disaster” from the media and politicians soon. Meanwhile, remember all the glaciers should have been the size of ice cubes this year…according to the “experts.”

Damn! 2050? I better get back up there and eat all the thimbleberries I can before they are gone.

Whew! Dodged that bullet. AT my age, I doubt I will be around in 2050 to enjoy the Apocalypse.

Of course, it is remotely possible that I will be around in 2050 to hear the Apology and that the Apocalypse has been rescheduled to 2080 thus causing my demise from laughing too hard.

AOC and all the current envirofundies preaching “12 Years!!” have ignored the lessons learned by all of the previous doomsayers who’s short term predictions have gone badly – ALWAYS set the date of Disaster just outside of the expected lifespan of yourself, and most of your audience. That way you can never be proven wrong, at least not while you’re around to hear about it.

Hey, why should this be different from the Great Disappointment, which keeps getting rescheduled every few decades?

Again the Chicken Littles have to revise their line of BS. Hate it when that happens. Now they willl have to scurry around and pick another disaster to harp on. Like when the due date for the Yellowstone eruption is supposed to occur.

How long has that been going on? Forever? Does it ever work? The only difference is that this time, the religion is “scientism” where anything so-called scientists say has to be true. Because it’s the science. “Most scientists agree” is all it takes.

You have that exactly right! I have fun getting banned from enviro blogs simply by telling them that the modern Green movement is simply a Hellfire and Brimstone religion for people who think they’re too sophisticated to fall for a hellfire and brimstone religion. “REPENT YE, O REPENT YE, WICKED ONES, OR YE SHALL ALL PERISH IN FLAME!!! AND YE MUST GIVE TO US, THE KEEPERS OF THE HOLY WORDS, ALL OF YOUR EARTHLY GOODS, TO PROVE THAT YE ARE WORTHY OF SALVATION, O YE EVILDOERS!!! REPENT YE, O REPENT YE!!!”

At JPL, you cannot even hope to get hired if you don’t sign off on AGW. Same goes with scientists applying for grants. How then is this not a government sanctioned religion?

Independent scientific inquiry is no longer the basis of science. You are forced to buy into a predetermined outcome or you have no career. When an issue is put up to a vote to validate that outcome with a headline screaming “All scientists agree with xxxxx”, your name better be on that list. Scientism is cheaper and more efficient than science. No need for computers other than those that produce hockey stick graphs.

These people should be fired. This is nothing short of gross incompetence.

It reminds me of the sign in the bar that reads ‘Free Beer Tomorrow’. Tomorrow never comes.

As the sun burns out in the future if will expand and incinerate earth…so yes…someday everything will melt. That’s global warming you can count on. Till then…chill out Dems.

“Might…” “Perhaps…” “Could possibly…” “Estimates project…” “Some experts think…”

All weasel words from a bunch of weasels.

When the climate models start tracking with the actual climate conditions…well, then we’ll talk.

Here is the problem with the Global Warming/Climate Change theory, it is all THEORETICAL. And, it can not be proven, to be accurate until it occurs. There has always been a “Humanity I s Evil And Will Destroy the World” cult out these. And, the detonation of the first atomic bomb jump started the activities of that cult. In 1945, theories of man-made climate change began to go mainstream. Nuclear winter, nuclear summer, wide spread mutation, all were going to destroy mankind. Human development was going to destroy the world by causing mass extinctions which deplete the biosphere until the Earth was uninhabitable. Aerosols were going to destroy the ozone layer. All of it pure science fiction. But, useful science fiction.

All of these doomsday predictions were laid at the foot of the industrialized nations, of which the United States was the greatest and most powerful, of that time. It was the world leader, as well. And every single proposed fix for the coming apocalypse involved actions which would harm the US or reduce its power. US manufacturing was supposed to shut down to save the planet, while giving billions to “emerging nations” which were spewing as much or more pollution into the atmosphere and hydrosphere. In order to remain economically competitive, US manufacturers moved to other countries which had far less stringent environmental regulations. And, still it was not enough. The self loathing anti-humanists kept right on pushing. and, the anti-American forces in the world kept right on funding them.

The New Green Deal in only the latest arrow in the kill America quiver. It will do nothing to improve conditions on the planet, because like every other world saving climate initiative, it will not be applicable to the nations which produce the lion’s share of the pollution in the planet. All it will do is to further destroy the United States.

Climate change theories are “believed” by the mentally ill, the stupid and those with a personal agenda such as destroying the US and the West or enriching themselves at the expense of others.

Geologically speaking, we are between ice ages anyway…so the earth is supposed to be warming – right up to the point that it starts cooling again. But nobody wants to talk about that. Climates change because that is what happens in nature – and contrary to what the politicians want us to believe, there isn’t much humanity can do about it except figure out how to adapt.

Time to demand these “scientists” provide detailed statement of what the climate will be for the next 20 years. The science is supposed to be settled so they should be able to provide it. Then as their predictions are proven wrong they will be disproving their theory.

Laughable that they think they can get away with the “independent” baloney (I really mean a different word beginning with B but baloney is nicer for our audience). Especially when they call themselves Climate Restoration.

The paper was written by an independent think tank in Australia called
Breakthrough National Centre for Climate Restoration.

Global Warming is proceeding at a glacial pace. (Ahaha…haha…ha.)