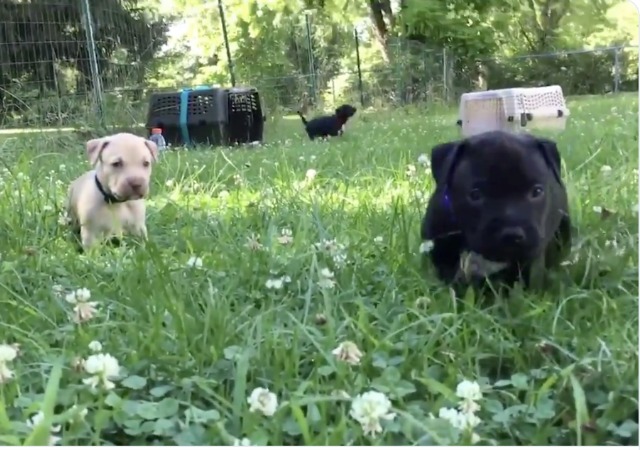 The one area everyone on the political spectrum agrees on? Civil asset forfeiture sucks.

On Tuesday, the FBI tweeted out a video of adorable puppies, but it used those puppies to justify civil asset forfeiture laws.

Civil forfeiture laws are helping the FBI and its partners get dogs rescued from dogfighting rings positioned to be treated, rehabilitated, and moved into better situations. pic.twitter.com/snqrEKsmCz

Give me a break. You mean the FBI has no other resources or ways to rescue and rehabilitate these poor dogs?

Civil forfeiture remains a controversial issue in America since it’s “a process by which the government can take and sell your property without ever convicting, or even charging, you with a crime.” The procedures are civil, which means defendants do not receive the same protections given to criminal defendants.

Even if you’re found not guilty of a crime, it does not mean the government will give you back your property.

Back in 2017, the Department of Justice under Jeff Sessions expanded its civil asset forfeiture program even in states that banned the practice. Like the FBI, Sessions stressed that these funds that allegedly “were once used to take lives are now being used to save lives.”

Sessions allowed local authorities to bypass state laws by using a practice called “adoption,” which means those authorities can give “seized assets to the federal government instead of returning them to their owners.”

States and cities have not given in as many still ban the practice or make major reforms. In September 2018, Philadelphia reformed its atrocious civil asset forfeiture laws, which led to legalized theft of belongings to 23,000 citizens. It came after the city settled a lawsuit by a family after authorities seized their home because their son tried to sell $40 worth of drugs to a cop. The lawsuit led the city to pay back $3 million to its victims.

A couple in Alabama saw their lives turned upside down due to civil asset forfeiture over $50 of weed:

As Reason reported last week, the Almonds filed a federal civil rights lawsuit earlier this year against the Randolph County Sheriff’s Department, alleging that in January of 2018, the sheriff’s narcotics unit busted down their door, threw a flashbang grenade at Greg Almond’s feet, detained the couple at gunpoint, and ransacked their house.

The search only turned up $50 or less of marijuana, which the Almonds’ adult son tried in vain to claim as his, and a single sleeping pill outside of a prescription bottle with Greg’s name on it. The Almonds were arrested and charged with misdemeanor drug possession for personal use. However, deputies also seized roughly $8,000 in cash, along with dozens of firearms and other valuables, using civil asset forfeiture, a practice that allows police to seize property suspected of being connected to criminal activity.

A year later, in April 2019, a judge dismissed the misdemeanor drug charges against them. The judge also ordered the government to give the couple back their home.

Reason‘s C.J. Ciaramella covers asset forfeiture. Earlier this month he wrote about a study that proved funds from asset forfeiture does not have much of an impact on solving crimes (emphasis mine):

The Institute for Justice, a libertarian-leaning public interest law firm that has challenged asset forfeiture laws in several states, released the study today. It examined a decade’s worth of asset forfeiture data from the Justice Department’s equitable sharing program, which distributes hundreds of millions of dollars in forfeiture revenues to state and local police agencies, and found that more forfeiture proceeds did not result in more solved crimes or less drug use.

The study also found that asset forfeiture activity increased in times of local economic stress. For example, the study reported that a 1 percent increase in local unemployment “was associated with a statistically significant 9 percentage point increase in seizures of property for forfeiture.”

“These results add to a growing body of evidence suggesting that forfeiture’s value in crime fighting is exaggerated and that police do use forfeiture to raise revenue,” Kelly said in a press release. “Given this evidence and the serious civil liberties concerns raised by forfeiture, forfeiture proponents should bear the burden of proof when opposing reforms that would keep police focused on fighting crime, not raising revenue.”

Another survey conducted in four Texas counties “found that half of the cash seizures were for less than $3,000, and 20 percent of the cases were not accompanied by criminal charges.”

Civil asset forfeiture is legalized theft. The FBI should find another way to raise funds to help out the puppies.

That photo is not very good advertising for a dog-fighting ring.

You mean if we had officially labeled Hilary and Obama as dogs that the Department of FIB would have done their assigned jobs (per their job descriptions)??????

I kept reporting Hillary as a bítch to the FBI but Comey and his pals let her off the hook.

The FBI should be obeying laws about asset forfeiture, not advocating for or against.

I know a guy that lost a house and 20 acres over this. He was never convicted but the property was gone without compensation just the same.

How is dog fighting a federal issue/crime? The FBI should have nothing to do with it.

Maybe we can link this with the Sad Puppies movement, which the press trashed over the last few years.

CAF is an abomination. A putrid stain on the fabric of government. It should be definitively outlawed. Sessions’ opinion of it is another of the reasons his appointment as AG was a very bad idea.

Otherwise, I’m neutral on the subject.

Once upon a time the Bureau was pretty good on PR, now they aren’t even good at that.

They might as well publish a photos of Comey.

The FBI has been corrupted.

Civil forfeiture is clearly unconstitutional regardless what court rules. And as for Sessions, is there anything that this doddering idiot did that was useful? Anything at all?

“doddering idiot?” That gives him an excuse for being the rat he is.

Sessions knew exactly what he was doing.

And if they robbed banks, they could buy ten times as many dogs.

That still would not make it right.

Is the FBI’s point that if you forfeit your Constitutional rights, the world will be a better place?

First, how bout the federal government cites Constitutional authority for regulating or banning drugs in the first place????

I find nothing in the Constitution that gives the federal government authority over plants, medications, foods, animals.

All of these areas belong to the states to regulate.

Producing, transporting, distributing, and selling drugs to the consumer are clearly commercial activities. The feds use the Commerce Clause power to regulate legit drug companies as well.

The dogfighting is a bit more of a stretch, but there is commerce within it and all around it, and articles of interstate commerce are used to buy and sell dogs, transport dogs to fights, and organize and administer the actual fights.

The authority does not extend to the goods and services themselves. It only extends to the act of commerce.

The federal government only has Constitutional authority to make sure trade between the states is fair and equal, nothing more. It certainly doesn’t have the authority to ban goods and/or services.

Criminal forfeiture exists for instances in which crimes are committed, so civil forfeiture is not essential.

The govt can use either, and often pivots from one to the other within a case, which is vexing and expensive for third party claimants coincidentally caught up in the mess.

My 15 y.o. Gordon Setter, Romeo, wants you to know HE KNOWS what’s going on when the puppies start showing up.

I want Texans to know that on the whole it was a good move. Coming here from Kali. I know that you Texicans are worried I’ll bring along some STDs (State Transmitted Diseases) and you could have a point.

So lets get some loose ends out of the way.

1) No more strychnine traps on multi-use leases. I realize this maybe sounds like “inside baseball.” But game has to respect game. The trappers are too good at their job. My Romeo is a natural pointer and I would have loved to hunt over him. But there is no way I could have kept him away from a well baited strychnine trap.

2) Women driving. I just wish Texan women were as interested in driving above the 45 mph speed limit than outside the Kroger parking lot.