Elizabeth Warren polling at 10% … in Massachusetts

Elizabeth Warren polling at 10% … in Massachusetts

Elizabeth Warren has plans, it’s just not clear that she has likability. If her home state is any measure, the more people know her, the less favorably they view her. 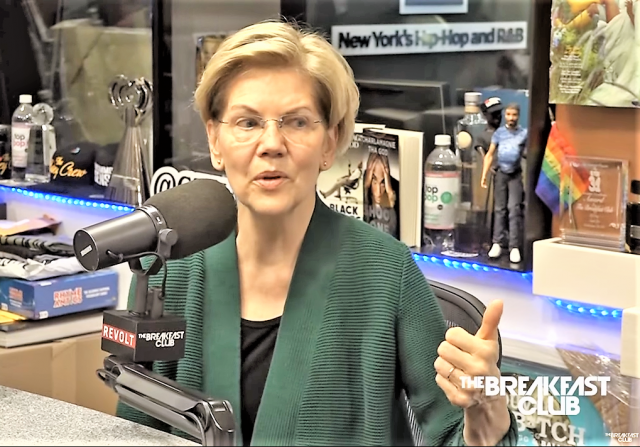 There’s not question that Elizabeth Warren has generated buzz with her serial proposals to transform the country.

Whether her plans, which impose a government control of the economy that makes Obama seem like a free-market zealot, will sell in a general election is something even the NY Times is questioning:

Many of the proposals from Ms. Warren, a former Harvard law professor and hawk on financial regulation, could face a difficult path to winning over moderates in a general election, and to gaining approval in Congress if she did take the White House. But the sheer volume of her plans, and their detail and variety, is forcing her rivals to play catch-up and stake out their own positions.

Her proposals would tip power from executives and investors to workers and allow the federal government to more aggressively steer the development of industries….

But Warren’s plan-orama has given her media attention and a bump in the national polls, even though the bump is not as large as the media hype.

But in her home Commonwealth of Massachusetts, she continues to poll poorly. Recall that in early April we reported that Warren was polling in 3rd place in Massachusetts. That Emerson poll showed Warren at 14%, trailing Bernie at 26% and Bernie at 23%.

Sen. Elizabeth Warren (D., Mass.) is viewed unfavorably by nearly half of voters in Massachusetts according to a new poll, an unusually high number for a lawmaker in her home state.

Warren, who has established herself as one of the top 2020 Democratic presidential candidates, is as likely to be viewed favorably (46 percent) as unfavorably (46 percent) with the voters who know her best in the Suffolk University/Boston Globe survey. In comparison, Republican Gov. Charlie Baker was viewed favorably by 69 percent of respondents, with just 15 percent viewing him unfavorably. Sixty-six percent said he should run for a third term.

The comparison to other Massachusetts politicians shows Warren with sky-high unfavorables: 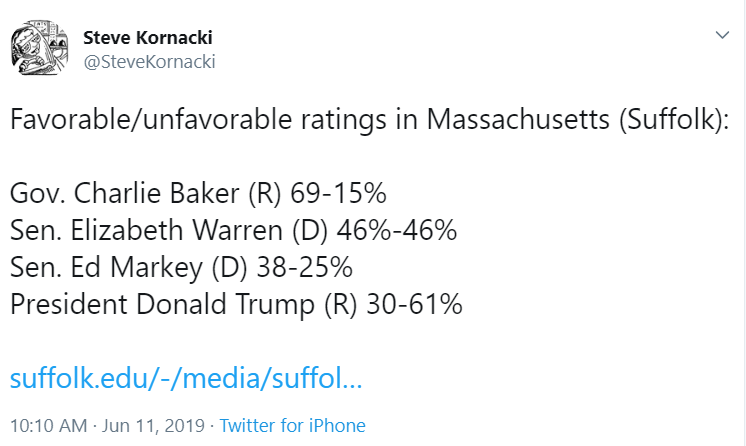 Warren has a particularly problem among Massachusetts men, where she has favorable-unfavorable views similar to Trump: 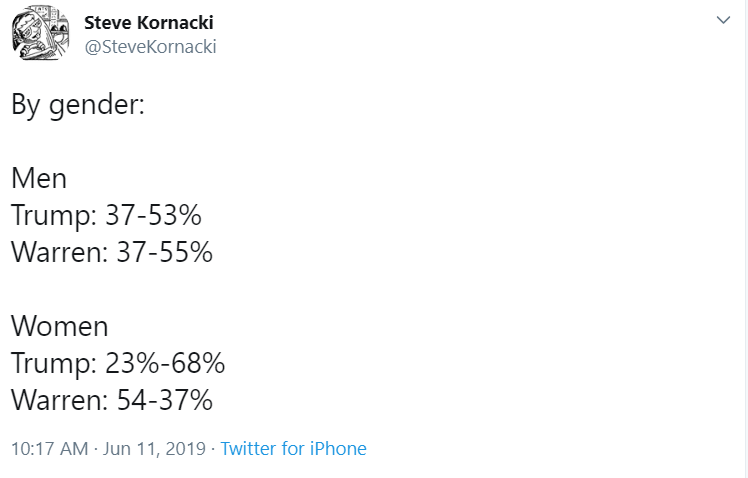 Elizabeth Warren has plans, it’s just not clear that she has likability. If her home state is any measure, the more people know her, the less favorably they view her.

It’s clearly becoming evident that the dems don’t know what they want, why they want it, who they want to do it and how they’re going to get there. Confusion, TDS and discord are today’s norms for the lefty, anti-Americans. Not to mention the elephant in the room…anti-Semitism.

….but if they can con…er….get some one else to pay for it, they seem to want everything (free to them – not to others).

Wonder if Lizzie ever did this also?

Ilhan Omar Filed Taxes Jointly With a Man Who Was Not Her Husband, While Legally Married to Another Man
—Ace of Spades

Shrieking Crow is said to be a fairly nice person in real life. But her public appearances are no better than a banshee.
Then there was her establishment of the Consumer Financial Protection Bureau which she created in a manner where it was not answerable to either Congress or the President, making it a fourth branch of government. Easily one of the most dangerous moves ever made in America, equal to the folly of the Federal Reserve.

I live in Massachusetts and find Fauxcahontas to be appallingly abhorrent, yet, refreshingly appealing by comparison with the Kennedys.

People forget, but she barely won her MA Senate seat the first time around, in a year Obama was on the ticket. Because she was such a lackluster candidate.

But the Indian thing had already hit the press. So she’s won all her political races despite that issue presumably against her.

With so many democrats in the field, its hard to tell if anyone will gain enough support as the lessor candidates drop out to stop Biden. As scary as the prospect of President Biden is, President Warren is even scarier.

Mass is telling her where to put her fake beer bottle.

Still, can’t we all sing along?

Uggh. I hate reservist. And I am one. But if you add up all the years, not by much.

“Sir, you didn’t put enough top spin on that one.”

If she is so unpopular, why do they keep electing her?

Same thing happened with Jimmy Carter. As a Georgia resident said on a radio interview during the Iranian hostage crises: “We tried to warn you.”

As a Mass resident, I can sincerely state that this fraud will struggle to be re-elected as Senator here if any decent candidate emerges to run against her. Her shrill style, her lack of accomplishments and her lying about being an Indian has pretty much crapped in her sandbox.

You knew about the Indian thing when she was first elected. I thought she was finished when that blew up in the Boston press a few months before the election … but she won anyway. And was reelected anyway 6 years later.

When it comes to Warren, the more you know about the candidate the less likely you’d be to support her.

In the general election many voters will know and care about nothing beyond the candidate’s party label, and perhaps the candidate’s sex (oops, are we still allowed to say ‘sex’ and not ‘gender’?).

But but, primaries are different. A major consideration of the voters is not so much whether they care for the candidate but what they think of the candidate’s prospects to prevail in the general election.

Except for a few of the politically deranged, who might vote for anyone willing to jump up and down while screaming, “Impeach Trump! IMPEACH!! Trump is AN EXISTENTIAL THREAT TO AMERICA!!!”