Name the names, so we can have the debate on the future of the federal judiciary.

During the 2016 campaign, Donald Trump famously put out a list of judges he would consider for the Supreme Court if he were elected.

The list served both to assure conservatives and also to motivate Republican voters. It’s widely agreed that the Supreme Court specifically, and the federal judiciary more generally, were key factors in Trump’s victory.

As we have covered dozens of times, Trump has followed through on his promises with Gorsuch and Kavanaugh for SCOTUS, and a strong remaking of the Court of Appeal and increasingly, District Court.

Democrats seem to like the idea of a list, and are putting one together. The NY Times reports:

… liberal activists, hoping for a chance to offset the growing conservative presence in the courts, have identified a pool of potential judicial vacancies that could remain out of Mr. Trump’s reach — scores of seats held by veteran judges appointed by Democrats who may be biding their time, awaiting the outcome of the 2020 presidential race….

“It is essential to be ready on Day 1 of a new administration with names to fill every vacancy,” said Nan Aron, the president of the Alliance for Justice, the 40-year-old liberal judicial advocacy group. “This is to start identifying people so the new president won’t waste a minute in addressing this need.”

The initiative is called Building the Bench, and the Alliance for Justice is being joined in underwriting and supporting it by a number of other liberal advocacy groups and labor unions. A group of more than 30 law professors and lawyers will serve as an advisory board….

Unlike the unprecedented Trump list, the liberal groups do not intend to make their recommendations public — they see them more as a guide for a potential Democratic administration.

Wait, what, they’re putting together a list but refusing to name names.

Carrie Severino of the Judicial Crisis Network, which has been active in backing Trump’s nominees, tweeted:

Shocking @nytimes story reveals left wing dark money groups working with Democrat pres candidates on a secret list of nominees for SCOTUS. Why are they hiding this list? Why are they scared to show the American people the kind of judges they want? #SecretList #StopHiding

@realdonaldtrump had no problem revealing his list of potential judicial noms. He made it public, campaigned on it, & let the American people see the kind of judges he would appoint. Why are left wing dark money groups and Dems not willing to do same? What are they hiding?

These left wing dark money groups and their Dem allies are trying to expand the number of justices on #SCOTUS. They want to pack the Court, and aren’t even willing to tell the American people who they are going to pack the courts with. What are they hiding? #SecretList 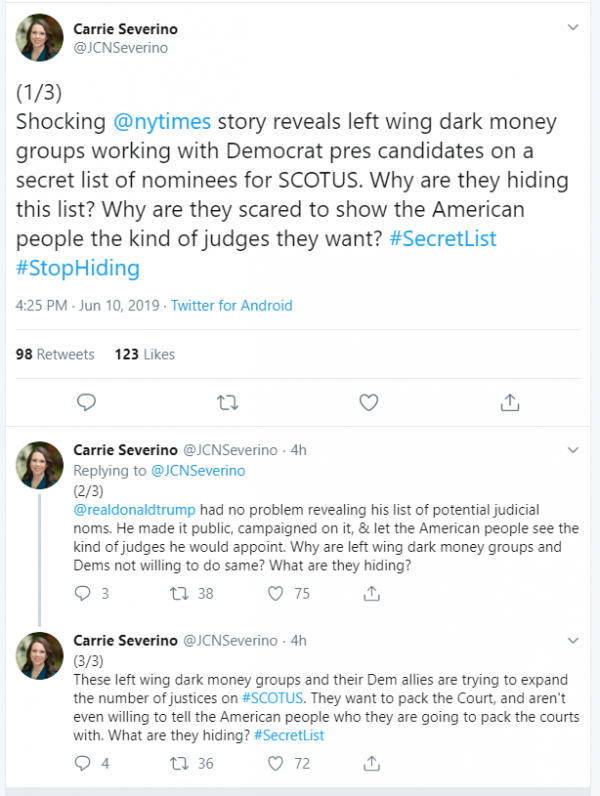 There’s nothing wrong with Democrats putting together a list of potential judicial nominees. But it also makes sense to follow the Trump example of transparency.

That’s the argument made by Mike Davis, formerly counsel to the Republican Senate Judiciary Committee members:

When we are talking about judges and judicial philosophy, conservatives and other right-thinking Americans are on our strongest footing. At @Article3Project, we welcome this debate with The Left. But why are they scared to tell us who is on their secret list of potential judges? 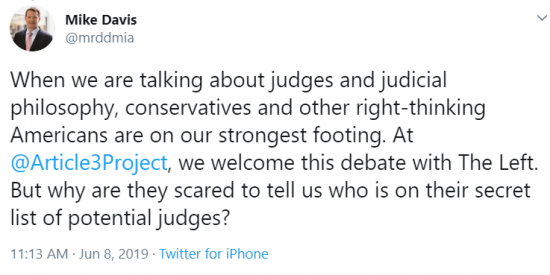 If Trump loses, the names on that list will be the least of the Dems’ problems.

The border and jobs. Judicial picks how far down was that on most people’s list?

It was pretty damned high on mine. We live in a nation ruled by Black Robed Masters and until there is another revolution (if ever) that is the 800 pound gorilla in the room.

You get the idea. Ignore that 800 pound gorilla at the nation’s risk.

Judicial picks should be at the top of everyone’s list. So much can very quickly be undone by left leaning judges.

Look at how much trouble judges appointed by Obama have given the Trump administration.

You talk about borders and jobs being a high priority, and they are, but what do you think would have happened to both had Hillary become President and got to fill the SCOTUS seats and all the judge positions at the lower level with leftist judges?

Do you think borders and jobs is a high priority for those judges?

The Supreme Court picks was my top reason for voting for Trump. Had we lost the Supreme Court to a strong majority of liberals it wouldn’t have mattered any longer who was president. Our country would have been permanently transformed and I don’t think we could have gotten it peaceably back.

For the 2016 election, those are the key factors I happen to recall.

To paraphrase a crazed marsupial who used to post here on LI:

3. The rest is gravy

This is a gift to Trump. He needs to hammer them over the secrecy. He needs to point out that his list was not a secret. Everyone knew who was on the list before the election.

Leftists once again show they are afraid to tell people what they really want to do because they know the people will balk at the leftist plans.

For Trump his list was easy. Make a list of solid judges with great experience and solid conservative credentials. Mission accomplished.

The way the Democrats have built their identity politics bullshit, its guaranteed they’ve left SOME favored identity group off the list and then the SJWs would have yet another meltdown that they didn’t have a gay transgender ginger Asian on the list.

And since there ARE no good judges from dozens of identity groups, if they release the list and have actually managed to find one of every one then most of them will be as pathetically unqualified as Judge ‘wise Latina’ Sotomayor.

It’s lose-lose. They can’t possibly satisfy the insane identity groups crowd, and if they attempted to try it would be pathetic how unqualified their list was.

They can’t release the list, but they can drop chaff and flares. It will be easy for them to find four or five of their best qualified and most sane potential nominees (which of course means they would never get nominated except for some dead-end postings), and ‘leak’ that to the NYT/Post/CNN so pre-written stories can blitz the headlines for a few days.

“The Democrats have been putting together a list of potential judicial nominees for the last few months so when Joe Biden is elected, they will be able to swiftly capitalize on the Republican’s defeat with qualified nominees. And if what we’re seeing is a sample, they have quite a list of the best prepared. Let’s take a look this hour during our program…”

Meanwhile the ‘real’ list will only contain mindless devotees to the ‘Narrative’ who owe their careers to identity politics and the DNC.

They have to keep it secret. Voters might think that Cher Bono, Alyssa Milano, Reese Witherspoon, Jane Fonda or Hillary Clinton are too controversial

They are afraid of a Blasey Ford retaliation. They fear their own despicable reciprocity the most.