“You [are] running for president and you want black people to vote for you — that’s not going to happen.” 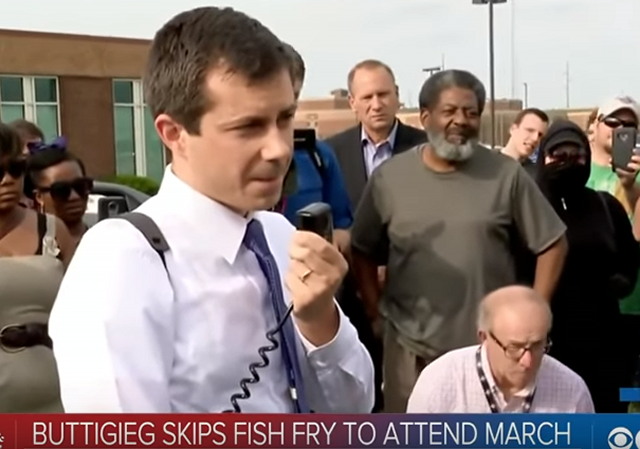 While most of the Democrats running in 2020 were visiting South Carolina this weekend, Pete Buttigieg returned to South Bend, Indiana, after a black man was shot and killed by police in the city. Mayor Buttigieg found himself in a confrontation with Black Lives Matter activists and angry residents.

South Bend, Ind., Mayor Pete Buttigieg (D) was confronted by protesters Friday night as the presidential hopeful and his city continue to grapple with the fallout from a fatal police shooting of a black man.

About 150 protesters approached Buttigieg and Police Chief Scott Ruszkowski with a litany of demands, from firing police officers to requiring more training programs for officers, according to the South Bend Tribune.

The rally was just one of several events that have been held since last Sunday, when Sgt. Ryan O’Neill shot and killed Eric Logan, 54. O’Neill has said Logan approached him with a knife, but he did not have his body camera on at the time of the shooting.

“I’m mad because my brother died,” said Tyree Bonds, Logan’s brother, according to the newspaper. “People are getting tired of you letting your officers do whatever they want to do.”

“I have been here all my life, and you have not done a damn thing about me or my son or none of these people out here,” Shirley Newbill, Logan’s mother, told Buttigieg. “It’s time for you to do something.”

Those comments highlight a recurring criticism of Buttigieg’s job performance as mayor of the Indiana city. They also reinforce Buttigieg’s poor polling among black voters.

Caroline Linton of CBS News has more on the protests:

Pete Buttigieg faces South Bend protesters: “You want black people to vote for you — that’s not going to happen”

2020 Democratic hopeful and South Bend, Indiana, Mayor Pete Buttigieg told protesters in his city on Friday that there will be a review of the police department after a white officer shot and killed a black man without his bodycam on. “I’m not asking for your vote,” Buttigieg told one protester, who responded “you’re not going to get it.”

The optics of this situation are terrible for Buttigieg. One week before the first 2020 Democrat presidential debates, he’s not only facing criticism from the black community in his own city, but his responses are a reminder of his youth and inexperience.

Mayor Pete can’t really be seen as the active / competent / actual mayor of South Bend can he? Seems he’s spent more time outside the city in 2019 then he has running day to day operations. This is the primary reason I dislike anyone currently in elected office running for a different position while staying in their current one.

The latest crime statistics I can find are from 2016. Hoo boy.

The statistics are from the FBI Report of Offenses Known to Law Enforcement. Per this site, the crime rate has been trending down over the past 18 years. But that’s true for the US as a whole. And it’s also a little misleading to put it that way because while property crime has been trending down fairly steadily (it seems that no on there has anything worth stealing anymore) violent crime has been holding fairly steady. In fact it may even be spiking up. Check out the charts and graphs at the link.

So if overall crime is down in 2019 as predicted at the site that will be almost exclusively due to the drop in property crimes.

All in all, it strikes me as a depressing little town with a stagnant economy, and few prospects other than a really good chance of being a victim of a violent crime since the crime rate is so high.

What is it with Democrats and their fetish for failing people up? Like the teachers union members who keep advancing students who haven’t learned a thing since third grade right on up until they graduate from high school. The entire Democratic presidential candidate field seems to be made up of people who are either incompetent in their current job or they lost their last election.

South Bend is a shit-stain left by Chicago. That’s really all you need to know about it.

Did he tell the BLM activists that he is gay? That seems to be his singular qualification.

To be fair to transverse sexual orientations, homosexuals are the elite (i.e. pure) in the transgender spectrum (“rainbow”), and transgender is trendy among the functionally urbane.

If you’ve ever seen Colin Flaherty’s books, blacks and gays are not exactly friends.

Why does it seem that the black community will always turn out to support some dead criminal? And never have I seen any demands issued to the community about how not breaking the law will keep you from getting shot by the police, of any hue.

Its like the community wants criminality to be considered a cultural trait, and we know that is not the case.

What I find amazing is that, in contemporary America, it seems that the groups that agitate with the most frequency and volume, get their way, facts, rationality and common sense be damned. We’ve seen it with the “Black Lives Matter” racist liars, who took a few isolated police shooting incidents and outright lied/distorted those events in order to advance a slanderous and false narrative that was politically potent and convenient, we’re seeing it again, with increasingly assertive political agitation and victim-posturing from certain Muslims, who are becoming emboldened in pushing their contrived victim mythologies and attendant Jew-hatred/Israel-hatred agenda.

but he did not have his body camera on at the time of the shooting.

Uh-huh. Well, that is going to make it a bit of a tough sell.

They would be the first to complain if the police department actually abandoned the city and left the residents to their own device.

He should have acknowledged the obvious: human lives matter, beginning with our evolution from conception, or perhaps the presumptive emergence of consciousness from around the 5th week. It’s not still a mystery, is it? That said, diversity (i.e. color judgments) breeds adversity.

Each life determines rather or not it matters. A life is either productive, an asset to humanity, or through its own actions or inaction, may be a detriment to humanity. This has nothing to do with race.

Yeah, I think Mayor Buttplug was done when he thought it was a good idea to suck face with another dude on TV. Any ‘independent’ was probably disgusted by that. As were many democrats.

How much trouble is your campaign in when a “movement” based on a hoax gives you trouble? Lots!!

What all these infantile histrionics and ideological “purity” assaults/purges demonstrate is that, for the jackbooted Leftists, no Dhimmi-crat candidate or politician — no matter how “woke” they may claim to be, no matter how long their SJW membership may be — will ever be sufficiently radical to meet their standards. The compass needle is shifting ever-leftward, for these loons. All notions of civility, rationality and compromise go out the window, because, at the end of the day, totalitarians want their way, or, the highway. They will brook no dissent.

Let’s give credit where credit is due. In 2012 he was first sworn in as mayor. And one of his first official acts was to demote the black chief of police Boykins and replace him with Ronald Teachman. A complete outsider and in fact until October 2012 he had been training police in Uzbekistan, a former SSR in the old Soviet central Asia.

Guess what color Teachman is? Not a #BlackLivesMatter approved color. Since then has gone down from ten to five percent of the force.

Don’t get me wrong, I despise the #BlackLivesMatter crowd along with their fellow travelers. But if I were mayor I would have had a response prepared for when, not if, these race baiting opportunists swept into town to stoke the flames when emotions boiled over due to these perceived wrongs.

This isn’t the only thing the black populace is up in arms about. Apparently “Mayor Pete” and a real estate developer crony have a fetish for condemning buildings due to “code violations,” demolishing them, thus opening up land for development. Black people think the pair is targeting them. I don’t know if they are or not, but this is another perceived wrong.

He’s had seven years to prepare. He hadn’t done a damned thing and it showed because it was amateur hour at the South Bend town hall he presided over. A city of just over 100k people and he can’t handle it. #BlackLivesMatter agitators roll into town and he can’t handle them.

I know! Let’s put him in charge of a country of 320 plus million people, then put him charge of high stakes negotiations vital to our national interests with Putin’s Russia, the “Supreme Leader’s” Iran, Xi Jinping’s China. Not.

But what I meant by giving credit where credit is due is that he didn’t just fail to solve South Bend’s problems. He’s spent the last seven years making them worse.

Truly the man to pick up the Obama legacy torch and carry it forward. The last sentence isn’t a joke. Because there was nothing that Obama touched that he couldn’t make worse, either.

“Since then THE NUMBER OF BLACK OFFICERS ON THE FORCE has gone down from ten to five percent of the force.”

Again, I wouldn’t pander and I would do what I needed to do regardless of what the race hucksters have to say about it.

But I would at least remember that the race hucksters are waiting in the wings just waiting for their moment to stir things up among a group of people who have been indoctrinated to see racism whether it’s there or not and plan accordingly.

“Mayor Pete” either forgot they were there or expected a free pass because, gay leftist Democrat.

Tens of millions will be wasted this political season by lunatic liberals like Buttkeg. He has absolutely no chance of winning. But, I guess people said that about Trump. The difference is that Trump had a proven history of being a great leader. What’s Buttkeg got? South Bend? LOLOLOLOLOL!

Seems the best thing Alfred can do is stay in South bend and fix its problems.