“If I believe healthcare is a right, as I do, I can no longer support an amendment that makes that right dependent on someone’s ZIP code.” 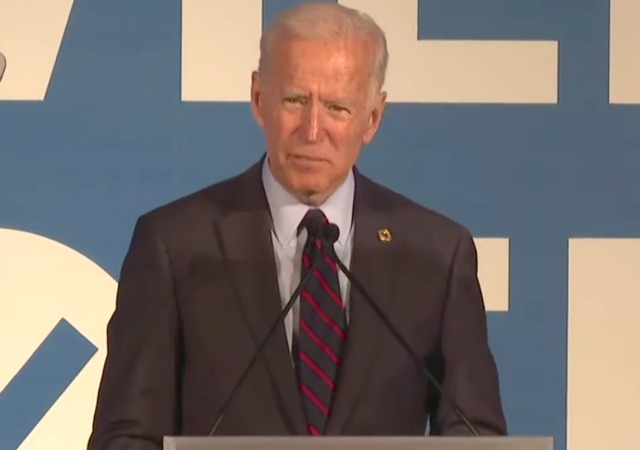 Vice President Joe Biden had a tough week, especially on the abortion topic. He also proved, at least to me, that he will say and do anything to get elected.

On Wednesday, Biden supported the Hyde Amendment, which bans federal funding for abortions, then opposed it before his campaign said later in the day Biden supported it.

After a lashing from opponents and activists, Biden announced on Thursday he does not support the Hyde Amendment.

The flip-flopping has given me a headache. From NBC News:

“I can’t justify leaving millions of women without access to the care they need and the ability to … exercise their constitutionally protected right,” he said, per NBC’s Mike Memoli.

“If I believe healthcare is a right, as I do, I can no longer support an amendment that makes that right dependent on someone’s ZIP code.”

How many times must we correct these people? Abortion is not in the Constitution. The Supreme Court ruled that a woman has a right to privacy.

He then turned his argument towards the Republicans:

Biden blamed Republicans for “denying health care to millions of the … poorest and the most vulnerable Americans by refusing even Medicaid expansion.” He promised that his new universal coverage health care plan would “provide for the full range of health services that women need,” with the “continued expansion of Medicaid and a public option of a Medicare plan.”

It sounds like Biden has abandoned his moderate positions with that promise of a universal health plan. Biden pushed a lie in a tweet:

Women’s rights and health care are under assault in a way that seeks to roll back every step of progress we’ve made over the last 50 years. If I believe health care is a right, as I do, I can no longer support an amendment that makes that right dependent on someone’s zip code.

Sorry, Biden, but no one is threatening my rights or health care. Why don’t any of you care about the rights of the unborn female human being inside a woman’s womb?

In my Wednesday blog, I wondered out loud if Biden’s past pro-life votes would harm his presidential ambitions. We all know that pro-life Democrats or any Democrat that supports any limitation on abortion cannot make it far within the party.

As his career in politics grew, Biden began to embrace abortion on a political level. He has said that he is still personally pro-life, but politically pro-choice because does not want to impose his “religious beliefs on other people.”

Guess what, Biden. I am a Catholic, and my faith had nothing to do with my change to pro-life. Science and common sense made me change.

We will see if the flip-flopping harmed Biden, who has topped polls for 2020 before he even announced his candidacy. I will keep an eye on new polls.

There was a very good reason why Slow Joe fared so poorly in his previous attempts to run for president – he’s not very smart. Biden is rapidly moving left of many issues to placate the Democratic activists and his poll numbers are dropping.

Many initially supported Biden, not so much because they liked him but because the others are so radical. Slow Joe is working hard to catch them.

The same reason Jugears chose him as his VP… he’s a moronic dipshit who served as impeachment insurance.

If you don’t like my position on the issue I have others.

Planned parenthood (e.g. selective-child, recycled-child) is a rite dependent on someone’s conscience. Human life evolves from conception. Our presumpive consciousness develops from the 5th week. Pro-Choice is a quasi-religion practiced by the Twilight fringe that is 2 (choice, prevention)+1 (adoption) choices too late. #HateLovesAbortion

Some Catholic, that Joe Biden, huh?

Joe, facing the voters is one thing; facing the Lord is something altogether different.