John Hickenlooper: “If we want to beat Donald Trump and achieve big progressive goals, socialism is not the answer,” 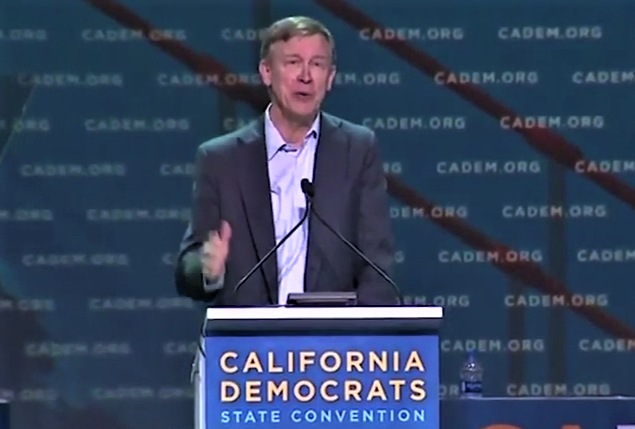 There was much celebration on the left when a recent poll suggested that 40% of Americans support “some form of socialism.”

Ultimately, though, socialism itself is not becoming more popular with Americans.  It turns out that few know what it is—some think of it as “equality,” others as free everything, others as capitalism lite, still others as ending poverty (!?), and so on.

Once it is explained to them or if they already know what socialism is, American voters balk and (correctly) state that it’s not compatible with American values.

A vocal number of leftists among Democrats, however, refuse to believe that America, as President Trump recently stated, “will never be a socialist country,” and they are pushing hard to the far left and dragging the Democratic Party along with them.

They’ve become so brazen that they literally booed former Colorado governor and current 2020 Democrat presidential hopeful John Hickenlooper for saying that “socialism is not the answer.”

Former Colorado governor and Democratic presidential candidate John Hickenlooper was booed while speaking at the California Democratic Party Convention on Saturday after he denounced socialism.

“If we want to beat Donald Trump and achieve big progressive goals, socialism is not the answer,” Hickenlooper told the audience, prompting boos. “I was reelected in a purple state in 2014, one of the worst years for democrats in a quarter-century,” he continued to loud expressions of disapproval.

“Socialism is not the answer”

If you can’t watch the clip in the above tweet, watch here:

Following his speech at the convention, Hickenlooper, who has previously defended our economic system as “the only one that can sustain a strong middle class,” told the Hill that Democrats are making a mistake by embracing socialism.

“If we don’t draw a clear distinction between Democrats and our candidates and socialism, the Republicans will paint us into a corner that we can’t get out of,” Hickenlooper told The Hill in an interview shortly after his speech. “Massive government expansions may not be strictly speaking socialism, but trust me: Republicans will make it seem like socialism. In places like Ohio and Michigan and North Carolina and Wisconsin, places we have to win to beat Trump, we’ll be starting out ten yards behind.”

“We need to be laser-focused on winning this election, and that’s going to mean focusing on kitchen table programs that will actually improve people’s quality of life,” he said.

The upside to the Democrats’ enthusiastic embrace of socialism and willingness to treat its own party members in this way is that it’s a real turn-off to normal Americans.  Should the Democrats continue down this path and a socialist win the Democrat 2020 primary, Trump wins a second term.

Hickenlooper gets it, but no one on his side appears to be listening.

No room under the Democrat tent for sanity and reality based solutions or anything that is good for the US….

Vote your way into socialism, shoot your way out of it.

“If we want to beat Donald Trump and achieve big progressive goals, socialism is not the answer,”

Those goals are what make up socialism.

Yeah, I saw that, too. So is ex-Gov Hickenlooper telling everyone he’s dishonest? “I’ll pretend to be a believer in capitalism and not a socialist during the campaign, but when I get elected, I’ll toss that overboard and reveal that I’m a socialist.” Egad. We Republicans better re-take the U.S. House and strengthen our majority in the U.S. Senate.

Such a profound truth in so few words. Nothing more is necessary to say.

“Socialism” means that people will expect me to be sociable.

So of course I’m against it.

It is interesting to watch the Democratic Party and its 20+ formally-announced candidates for President! I’m a Republican, and am torn who to root for: an avowed socialist with the idea he/she will be easiest to beat, or a saner one who if (heaven forbid) they’re elected, we won’t have a lunatic in the White House. Hmm. I guess I want a saner one who believes in capitalism, denies he/she is a socialist – because if they get the Dem nomination, the presidential campaigns will revolve around more centrist issues. (Trump will be less tempted to move left to sweep up more independents and center-left voters…)

Someone needs to explain to these Dem/Prog leeches that there aren’t enough producers to furnish all the free stuff they want.

It’s better to have the honest progressive fascist as the Dem candidate than one who pretends to not be a Marxist.

A Democrat taking a stand against neo-national socialism. Surely, a positive development.

Do I have that many nutjobs who are Democrats in my state of California? Oh laaawd help us.