Trump Tosses Bernie’s Campaign Into the Trash Bin of History

Trump Tosses Bernie’s Campaign Into the Trash Bin of History

He pointed out that former Vice President Joe Biden still controls the polls, but those same polls show that Sanders is not quite finished yet.

Looks like Bernie Sanders is history. Sleepy Joe Biden is pulling ahead and think about it, I’m only here because of Sleepy Joe and the man who took him off the 1% trash heap, President O! China wants Sleepy Joe BADLY!

However, when asked about hypothetical matchups, those polled chose Biden, Sanders, and Warren over Trump.

An Emerson poll from last week has Biden ahead at 33% and Sanders at 25%. Biden gained 13 points from the previous Emerson poll. Warren and Harris tie for third at 10% and Buttieg at 8%. The other candidates poll at 3% and less.

The Morning Consult poll from May 13 discovered that Sanders has lost support from the key age group he usually excels in: 18-29 year-olds.

While Biden still took the lead in the poll with 39%, he lost one point while Harris gained one point. Sanders sta

Biden has the lead in all polls according to RealClearPolitics. His RCP average is +19.5. 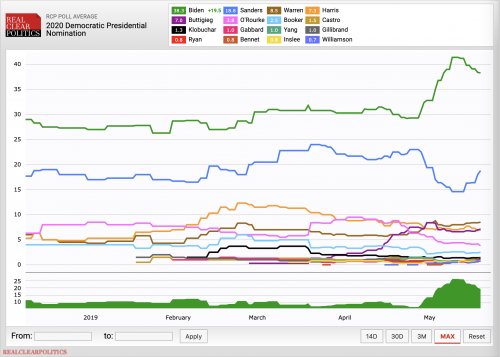 While I think Biden will come out on top, I still would not count out Sanders. Trump is doing what he does best: troll.

Same outfits polling this that did the Australian election I’ll bet. Pay no attention.

There are three kinds of lies: Lies, Damned Lies and Statistics. Polls are statistics and a good pollster can make a poll say whatever he wants. Never to be believed, much less taken to the bank.

I was on a citizen advisory committee for a very large homeowners’ association for a number of years. They tried to use polls in an honest effort to find out what their constituents wanted. That is, they wanted to know how to spend the Association’s money in the interests of the homeowners.

It just did not work very well.

In my opinion, the polls did not capture the real, thoughtful attention of the constituents.

If I’m right, this is an inherent weakness in all polling, and it explains why the only poll that counts is the vote.

The only thing this suggests is that Trump would lose if he were running for the Dem nomination. He has already conceded that to Romney.

Without a single primary yet, this is soooo silly. One thing is certain, though, the media is not in Bernie’s camp to the degree they were last time around.

But seriously, how can any poll or survey be accurate when you cant’ find any daylight between 24 (or is it 25??) candidates? It turns out to be a name recognition contest.

“One thing is certain, though, the media is not in Bernie’s camp to the degree they were last time around”

Wikileaks emails tend to tell you that the media were firmly in Hillary’s camp. The groundswell for Bernie at the end was the rank and file as a protest to Hillary’s inevitability.

Bernie has had a few gaffes which have institutional Democrats fearful they can’t win a general, so Biden is their pick until one of the pack can establish him or herself.

They want to fight but they want to win even more. you can spin a win that people want the most radical of your ideology. You can’t if you run on purity and lose

The primary goal of a polling company is to sell their results to someone. Given how self-centered the average politician is, would it make sense to try and sell them numbers that had them losing? (Other than Fauxcahantus, of course) A politician likely thinks, I am going to buy these numbers because they have me winning. Or at least the campaign head thinks, I’ll keep my job if I can show them numbers of them winning, so at the worst I’ll still be paid until the real results start to come in.

1. Trump belives in God and prayer.
2. He has prayed the old prayer, “Lord, make my enemies ridiculous”.
3. God answered in abundance.

American Association for Public Opinion Research defines a “push poll” as a form of negative campaigning that is disguised as a political poll. “Push polls” are actually political telemarketing — telephone calls disguised as research that aim to persuade large numbers of voters and affect election outcomes, rather than measure opinions.
https://www.aapor.org/Education-Resources/Resources/What-is-a-Push-Poll.aspx

people lie to pollsters … telling them what is popular
not what they plan on doing …..

Frank Lunt was all Hillary 2016. When Trump won he talked as though he knew it all along. Fox News hired him as a contributor. Failing your way up.