Trump: Stephen Moore Withdraws From Consideration for Federal Reserve Board

Trump: Stephen Moore Withdraws From Consideration for Federal Reserve Board

“I’ve asked Steve to work with me toward future economic growth in our Country.” 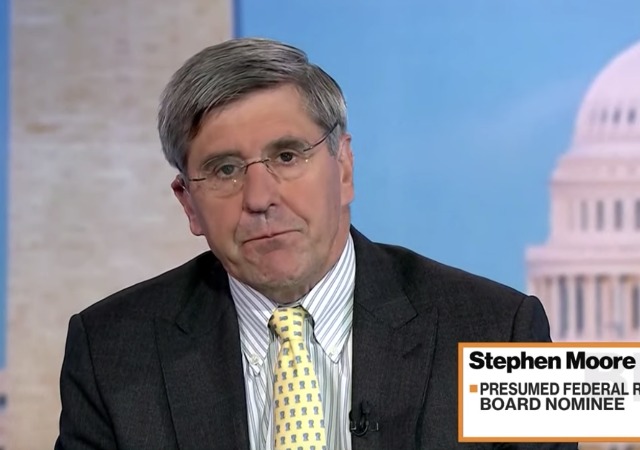 President Donald Trump announced on Twitter that conservative commentator Stephen Moore withdrew from consideration for the Federal Reserve board.

Steve Moore, a great pro-growth economist and a truly fine person, has decided to withdraw from the Fed process. Steve won the battle of ideas including Tax Cuts….

….and deregulation which have produced non-inflationary prosperity for all Americans. I’ve asked Steve to work with me toward future economic growth in our Country.

Moore has not commented on Trump’s announcement.

The withdrawal was a setback for Mr. Trump, who has witnessed the failure of his last two picks for the Fed and for a handful of other key administration jobs. It also represents the latest instance of congressional Republicans publicly signaling their opposition to the president on a high-profile policy issue.

More than a half-dozen GOP senators had expressed reservations about his candidacy, citing his comments about women, personal financial issues and views of the Fed among the issues that could make it difficult for him to win confirmation if formally nominated.

The media began character attacks against Moore when Trump wanted to nominate him. They have a tendency to do this with anyone Trump picks for any position.

Journalists wrote about the unsealed divorce complaint from Moore’s ex-wife in 2010. The complaint alleged “adultery, emotional and psychological abuse, and unpaid child-support debts.” It also showed that Moore “owed more than $75,000 in unpaid taxes, penalties and interest to the Internal Revenue Service.”

Moore explained “that the divorce had been settled amicably” and “disputed the IRS’s calculation of the tax debt but said he had paid it, and court records show the case is closed.”

The media also accused him of belittling women due to an old column in National Review about women’s basketball:

Mr. Moore also has faced criticism for columns he wrote for the National Review in the early 2000s seen as belittling to women athletes. “We are being force fed lady hoops. I have never in my life met anyone who actually liked watching women’s basketball,” Mr. Moore wrote in one of the columns. He called it a “travesty” that women were joining men in pickup games and recreational leagues.

Oh give me a break. I’m female. I cannot stand women’s basketball. I don’t like it when I see men and women playing with and against each other in any sport, mainly because the sexes have too many physical differences. I guess I hate my own sex.

In another column in 2014, he disagreed with “a gender pay equality proposal from a Democratic senator.” He said that America’s crisis in wages “isn’t about women’s wages; it’s about men’s wages” since the males “are still the chief breadwinners in most families, and their wages are not moving much at all.”

Is he wrong? I doubt it. The males in relationships of about 95% of the people I know make the most money.

Shortly after Trump’s November election, Moore said: “There’s that great cartoon going along, that New York Times headline: ‘First thing Donald Trump does as president is kick a black family out of public housing.’ And it has Obama leaving the White House. I mean, I just love that one.”

“I shouldn’t have said it,” Moore said Tuesday on PBS’s “Firing Line with Margaret Hoover.”

Maybe the comments didn’t cause Moore to withdraw. Moore voiced disagreements with the White House about the central bank today:

Hours before withdrawing from consideration for the Federal Reserve board, Stephen Moore was quoted as saying he disagreed with President Donald Trump’s call for the central bank to sharply cut rates.

“I’m not so sure I agree with the White House that we should cut rates by an entire percentage point,” Moore told Bloomberg News on Thursday. “I just don’t see the case for that right now.”

And I see nothing wrong with the joke about the “black family”. On the contrary, it sums up succinctly our problem with the MSM.

Sometimes the best thing you can do for people is hold them accountable until they clean up their act.

I have found that was necessary with young adults, where during the gasps of their being irresponsible children you have to give them the unvarnished truth, with several swift kicks to their posterregion. They always hate it, but ten or so years later acknowledge that finely understand that it was in their best interests.

They are generally doing a very poor job of child rearing, not all, but a very high percentage, and we see the results in a more than seven fold higher black crime rate, which occurs early and often. They frequently complain that their prosecution is more severe than what other races face, while ignoring that a long rap sheet drives more severe charging and punishment.

I am tired of black hypocrisy. I really wish that they would stop blaming others for their own poor judgement. I am aslo very tired of their persecuting other people, bald faced civil rights persecution needs to be prosecuted.

Humor, no longer allowed in the PC world. I heard it wasn’t popular in Soviet Russia, Nazi Germany or Cambodia in 1975 either. Hmmmmm.

Trump has done a number of great things for the economy but brow beating the Fed over interest rates is not one of them. The Fed needs to at least be perceived as independent from the executive branch. He has made it very difficult to do so.

We are in a time of extraordinary prosperity when measured by unemployment, economic growth and recent signs of wage growth. That said, we are also in an era of asset bubbles everywhere you look brought about by years of easy access to credit.

Excessive, crappy debt brought about the last financial crisis yet here we are today with more debt than ever… consumer, corporate, government… and much of it low quality, low or no covenant debt. When we have downturn it could get ugly very, very fast.

Just because the markets have a tantrum every time the Fed raises rates by 25 bps doesn’t mean rates shouldn’t be raised and a President riding the Fed for raising rates doesn’t help.

When the Fed screws up, someone needs to tell them about it

Raising the FFR to 2.25% is screwing up, are you insane. You really believe the economy is so fragile that it can’t withstand rates normalized to 2.5-3.0%?

We have growth, insanely low unemployment and rising wages. We also have asset bubbles everywhere and limited income generating investment opportunities which screws over retirees who really shouldn’t be chasing risk at this stage in their lives.

If someone is going to criticize the Fed let it be Kudlow.

The FED needs to be called out when warranted. They propped Obama up for years by keeping interest rates near zero and purchasing mountains of debt. “Brow-beating the Fed” is nonsense.

Great logic… the Fed actedly irresponsibly under Obama so lets make sure they continue doing so under Trump.

Just remember, at some point we will have a recession which is fine as long as it’s not a repeat of 2008. The more the economy is pumped up by low rates and crap debt that harder the fall is going to be and if a Republican is in the WH look for 8 year of some AOC-like Socialist in the WH after that.

Like every other department of the US government, the Fed has been corrupted after 8 years of Obama.

If Obama/jarrett/soros weren’t bad enough on their own, the GOPe is gleefully with them.

It’s the RINOS that are the problem and refuse to support Trump appointments, as it is stated.

“It’s the RINOS that are the problem and refuse to support Trump appointments, as it is stated…”:

Such perfection these individuals, never said or did anything that wasn’t PC their entire lives, so perfect, lovely, just lovely

Probably better he backed-out. He’d be another John Roberts.

It had very little to do with any jokes and a lot to do with the fact that he wouldn’t fit in with the establishment’s preferred model for a Fed member. Far too conservative.

Do not give in to these totalitarians.

I wonder if it wasn’t Pres. Trump himself who was unhappy with Steve Moore saying he disagreed with the White House about the need for a full percentage point rate cut right now. I didn’t get the idea that Moore himself wanted to back out. (Alternatively, perhaps enough RINOs in the U.S. Senate signaled they’d not vote for him — Sen. Susan Collins comes to mind. Also Sen. Lisa Murkowski (R-AK).

Moore said tonight on the Carlson show that Trump tried to get him to hang in. It was Moore’s decision.