The President of the United States and the former Director of the Central Intelligence Agency fighting over one of our cartoons. What a great time to be alive.

Tony Branco has gone and done it.

John Brennan and James Comey have been trying to throw each other under the bus, as we covered in Who’s going to cut a deal first in Spygate?

On May 20, Tony posted a cartoon summing up in one image The Three Stooges: 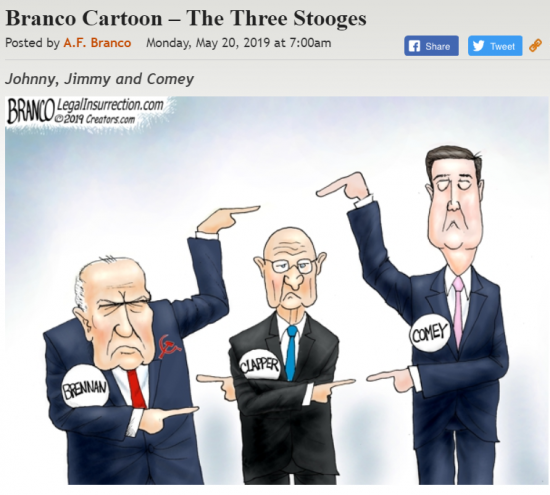 This afternoon, Trump tweeted the cartoon: 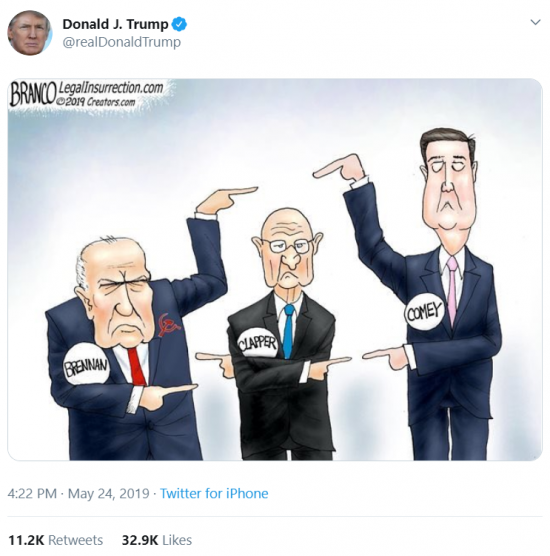 One of the people in the cartoon is John Brennan, who was not amused: 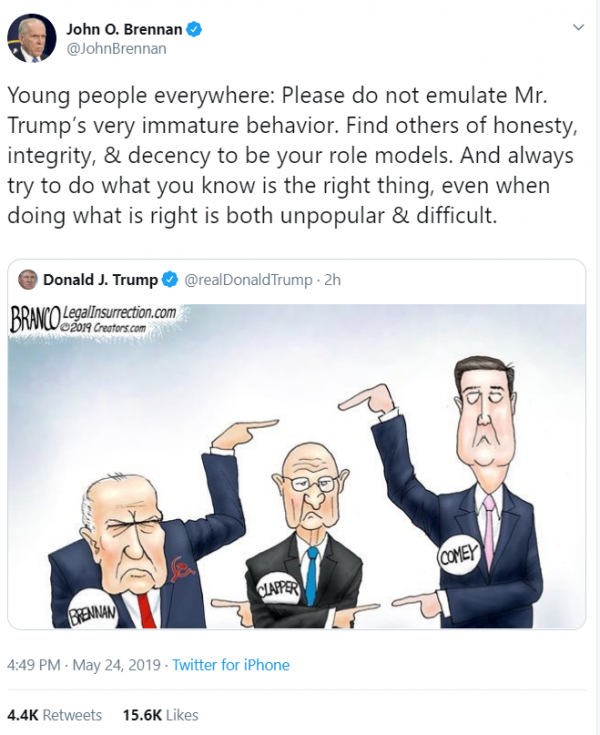 Mediaite is on the case: 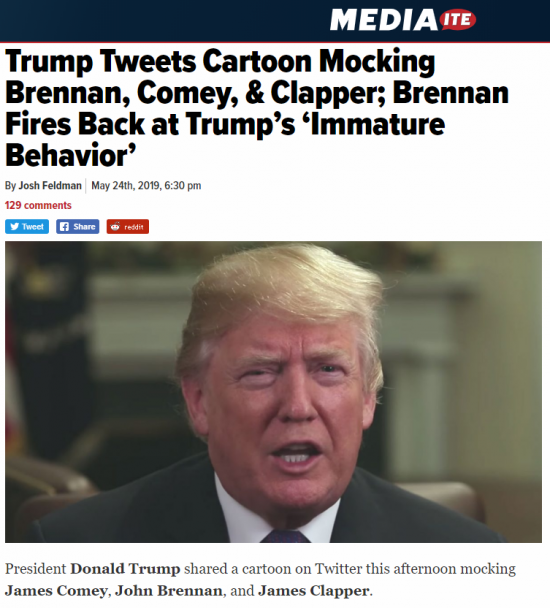 Someone on Twitter located and posted several of Tony’s Brennan cartoons: 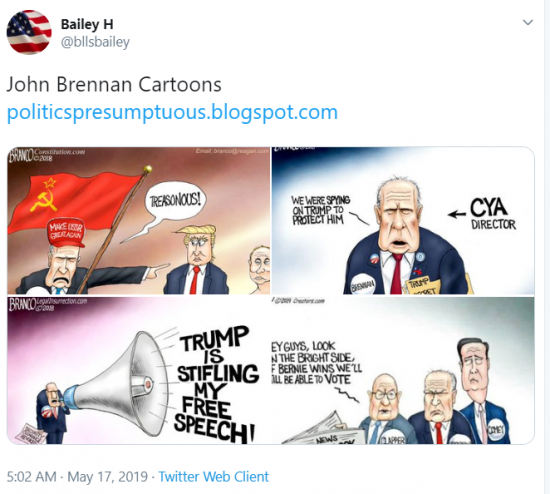 The President of the United States and the former Director of the Central Intelligence Agency fighting over an A.F. Branco Legal Insurrection cartoon.

What a great time to be alive.

Excellent. You’ve made the Big Time

Really hit a nerve with that one.

Their arrogance is catching up with them

Obama is in progress to become the Nixon of liberals’ dreams.

Obama is in progress to become the Nixon of liberals’ dreams.

When one considers Nixon giving us the EPA, wage and price controls, and pushing race-based quotas affirmative action. I am of the opinion that Nixon himself was the liberals’ dream.

Don’t forget, Nixon also took the US off the gold standard.

Let us not forget OSHA.

It always speaks volumes when someone lacks a sense of humor. They accuse Trump of being thin skinned. 2 1/2 Years fo Trump being trashed nightly on late night TV along with nearly every other comic performance worldwide and Brennen losses his shit over a cartoon.

Gotta love it! Now, if Trump would just MOVE to

Actually, it was baseball hall of famer Wee Willie Keeler who first said that. At 5’4″ he was the same height as Jerry Nadler, yet less than half the weight.

Line-Up for Yesterday
K is for Keeler,
As fresh as green paint,
The fastest and mostest
To hit where they ain’t.

Well, the pen is mightier than the sword… now add color and artistic talent (HT A.Branco) … why you have a MOAB…

I don’t see any downside.

As Brennan is about to swing, his last words: “Don’t be so immature!”

I didn’t realize that was a cartoon until just now.

Mark Meadows: The Democrats Are Raging in Panic Because “There is information coming that will curl your hair

I want lots of butter on mine

Heh
Heh
Heh
Branco and LI………it IS a great time to be alive!
Congrats, gentlemen!

And they say irony is dead. Brennan has just secured Branco’s future as a top-tier political cartoonist. The word “nasty” started as a reference to Thomas Nast’s style. We need to work on a similar adjectives as Branco’s legacy to the American lexicon.

The hubris of these neo-fascist Socialist homonculuses is boundless. In their Alice in Wonderland world, Brennan can viciously poke and prod Trump. Heaven forbid the President answers back. Well that’s just rude …..

I’ve always thought that Brennan just looked like a criminal. He’s got that high forehead, the beady eyes looking out from under those cro-magnon eyebrows, and an insincere mouth. There may be something to this because, according to Psychology Today, humans possess the ability to tell who’s a criminal and who’s not simply by looking at them: Criminals Look Different From Noncriminals

So, contrary to popular belief, you can assess people’s character and personality by simply looking at them. Nice people look nice, and nasty people look nasty, and it appears that humans have innate psychological mechanisms to tell them apart. Now, in a truly groundbreaking study, recently published in the Journal of Social, Evolutionary, and Cultural Psychology, Jeffrey M. Valla, Stephen J. Ceci, and Wendy M. Williams of Cornell University show that people can tell criminals and noncriminals apart simply by looking at their still photos. Criminals, it appears, look different from noncriminals.

I guess that should be “brancky”.

I dunno, snopercod- con artists & snake-oil salesmen have always existed, and a lot of them do very well for themselves just because they don’t look like crooks. They look like successful people, have nice homes & drive nice cars. They’ll still swindle you blind!

What was it that Biden said about Obama? “I mean, you got the first mainstream African-American who is articulate and bright and clean and a nice-looking guy.” I.e. he didn’t look like a crook or a ghetto black man; he still fools many, even though now we know he was as crooked as they come!

This cartoon is making the rounds. Zero Hedge added this cartoon to their link to this but I link directly to the source article:

Okay, it’s vulgar and Kunstler is another of ZH’s endless stream of libertarian “the end is nigh” doom-sayers. But he brings up an interesting wrinkle about the DOJ indictment and arrest of Julian Assange.

“The indictment of Julian Assange adds a big wrinkle to these upcoming proceedings. Apart for what it means to First Amendment protection for a free press (no small matter), Mr. Assange is the one person who actually knows who handed over the “hacked” DNC emails to Wikileaks. Perhaps getting the answer to that question is the real reason that the DOJ is throwing the book at him. The trial of Mr. Assange is sure to be a humdinger.”

Could that be? But will Assange be “disappeared” before that happens?

If his arrest and public trial is the only way to publicly expose who handed over the “hacked” DNC e-mails, this would make sense. The problem is that Assange offered this information to officials in exchange for his freedom. Is the spectacle of an international trial really necessary? Maybe that is how we finally arrive at a Nuremberg-style trial for the global coup attempt at some point?

Makes you think doesn’t it? Let’s hope we find out.

What role model of “honesty, integrity & decency” were you emulating when you decided to vote for a Communist? Josef Stalin?

Isn’t it wonderful how Brennan, who, along with his spiritual twin, Comey, represents the quintessence of the greasy, mendacious, imperially arrogant, lawless, hyper-partisan, self-serving, self-congratulatory and self-reverential Obama lackey, is full of advice to others on how to act with moral probity and rectitude?

Brennan is a disgrace, a Communist Party voter and sympathizer who should have been barred from serving in any government role, because of his obvious intellectual stupidity and his radical ideological predilections.

I will be happy to see this Leftist radical idiot in handcuffs, first, and in a jail cell, eventually.

Comey, Brennan, Clapper, I think they all will look good in orange!

I just noticed that, in his cartoon, Branco had added the Soviet Union’s hammer and sickle emblem to Brennan’s suit jacket — nice touch!

Next time you see someone thinking he’s all cool, you can tell him:

You may think you’re cool. But you’ll never be Branco tweeted by the President of the United States of America cool.

Yes, we should all try to do the right thing — for example, we should try not to overthrow a legitimately elected president…

Brennan, that’s an Irish name isn’t it? He somehow missed the Blarney Stone, but he’s got more chutzpah than a Jewish mogul in the rag trade.

Legal Insurrection is read in the White House! Bravo!

John Brennan is a communist infiltrator and a traitor to our nation. He should be arrested for treason, tried, then executed for his crimes against our nation.